Beyond Wanting to Know: Thoughts on Pursuing a Genetic Diagnosis 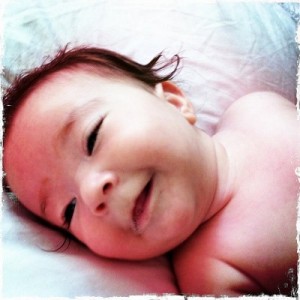 You could say I had warning. There was the 20 week prenatal ultrasound that showed several “anomalies.” But when my limp barely-breathing minute-old daughter was lifted from my arms, when they told me she was being transferred to the closest NICU, when they said that it might be a syndrome causing her problems, I was in denial.

She was fine. I just knew it.

And I was right, because in time my definition of “fine” changed. Before it seemed impossible to acknowledge that she might have a syndrome. We told the doctors as much. We knew she had all her chromosomes, and we refused further testing, despite protests from our family. We looked for any excuse we could find for her apparently dysmorphic features: my hands, my husband’s ears, my mother-in-law’s eyes. Now? Well, now we no longer expect answers.

Now, we understand our daughter, Esmé, is exactly who she is…and we don’t know what her future holds. And this has to be OK. We have no choice.

For me everything changed that day in the Emergency Department. Until that day we had been maintaining. Although Esmé was teetering on the edge of failure-to-thrive for her entire three and a half months, she was a happy baby. And we had learned to deal with the vast quantities of vomit, her unstable head and neck, and the stares we received from strangers. But that day Esmé turned blue in my arms. She had aspirated. Actually, she had been aspirating for months, a fact that her many, many doctors all missed. 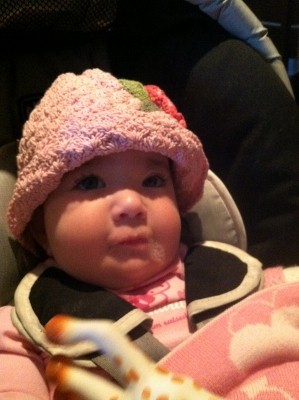 As they all rushed to work on her limp body, one doctor asked, “Is she otherwise healthy?” I was paralyzed. My mind ran through the multiple anomalies associated with each of her ten doctors: heart defect, hydronephrosis, poor feeding, low tone, and GERD. And I suddenly longed for a one-word answer—22q11, Prader-Willi, Angelman—rather than the convoluted narrative that explained my child’s health.

I couldn’t know it then, but that moment sealed my decision to have her tested for genetic conditions.

After my daughter recovered from her aspiration event (by way of two weeks in the PICU, a Nissen, and a G-tube), we met with a geneticist. The geneticist was pretty certain the diagnosis would be a chromosomal disorder located at 22q11, so he just tested for that.

This should be the end of the story, right? We make up our mind to test and, boom, six weeks later we have a result? We were prepared for a result of a 22q11 disorder when the genetic counselor called.

But they found nothing. I said, “Nothing?” And the counselor said, “Yeah, nothing. The doctor wants to go ahead and do the microarray. He feels that even though it isn’t 22q11, there is something.”

Now I knew all about the microarray. I understood that it was the most comprehensive test available. It certainly would tell us what was wrong with our girl. So we consented. And six attempts later, the nurse finally drew the bare minimum of blood from Esmé’s scalp, and off it went to the lab.

This time I swore out loud to the counselor, “You’ve got to be kidding me. The test came back clean?”

At first I felt fantastic relief as I now had confirmation that all of the doctors were alarmists. All this time we were right. Nothing was wrong with my baby. But this feeling was quickly replaced with confusion as the counselor suggested further testing.

“Wait, the doctor wants to test for Prader-Willi? I thought we just tested for everything.”

And here was the deeply upsetting part of genetic testing that I was unprepared for. I thought that the question was: to know or not to know. But it is, for some people, just a first step. Each test was sold to us as the test that would give us answers, but behind each of these answers lurked the need for another, more subtle, more in-depth test. First there was the chromosome count to identify a potential trisomy or monosomy, then the microarray to identify other less apparent syndromes. More recently there was the methylation test to look for specific mutations that are too small for the microarray to pick up. None of these tests has given us the answers that we are seeking. They have found nothing remarkable. And yet our daughter still shows all the signs of a child with a genetic disorder: hypotonic, severely delayed, and slightly dysmorphic.

Now they tell us that THE test is coming soon, the one that can read her genetic material from one end to another. But I fear that there is just yet another perfect test lurking behind that one, and then another, and another.

Knowing When to Stop

So, we are faced with a new question, one that seems frighteningly like a demented version of the original question. Now it is: When do we stop testing? And how? 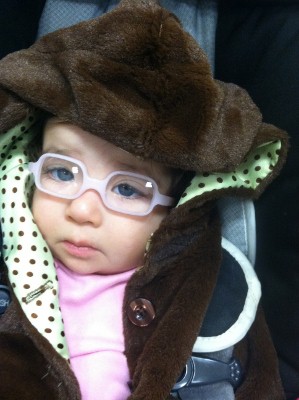 People who are not weighed down with the burden of this decision simply cannot understand. They ask, why would you stop? Don’t you want to know what’s wrong with Esmé? I try to explain the reasoning, breaking it down to three main reasons: living with baited breath, Esmé’s pain, and benefits. I typically keep the fourth reason, a nameless fear of knowing and of never knowing, to myself.

I explain that this process could go on for decades. During this time we could live our lives in six week increments, waiting for, hoping for, and fearing the call. Both calls: the call with an answer and the one without. All the while looking at Esmé like Cinderella trying on a set of symptoms, a diagnosis, a future.

Esmé’s physiology makes the process of “just drawing blood” hellish. I describe, often tearfully, that even when she is under for a procedure it takes approximately six to ten attempts to draw her blood. When she isn’t under it means that I pin her down—I would rather it be me than a stranger—while a nurse does a sadistic version of pin-the-tail-on-the-donkey under my child’s skin. It is awful–and optional.

For all this pain, I ask, what benefit does this testing provide my daughter? Yes, maybe there is something more we can do for her once we know. Perhaps. But the doctors more frequently tell us that it is about our peace of mind…to help us “know what to expect.” As if that was ever truly possible. As if anything can or should ever be “expected” of a child. Our daughter is who she is: happy, goofy, loving, social, and a bit of a dare-devil. I do not expect her to be president, or a concert pianist, or a doctor. But she may be any or all of these things. I hope for her health; I pray for her happiness. And I enjoy every moment of her present.

Admittedly, I do have a deep desire to search the ends of the Earth for any answers about Esmé’s health. It is a very quiet and private desire. I do want to know. But I am not sure why. And I want to know even as I also know that “knowing” may not offer us any relief. “Knowing” may mean that we find some small mutation that no one else has and that may or may not be significant. “Knowing” may mean more questions. Scratch that, knowing certainly means more questions.

Honestly, I am afraid to admit that I may still hope of proving that “it’s nothing” and that my daughter will grow out of her current challenges—and into other, more familiar challenges. But I know that’s not possible. You can never prove a negative. Genetics can’t answer that question. Only time can.

Hillary Savoie is Esmé’s Maman, This American Life scholar, and a yoga nerd. In between organizing Esmé’s schedule, yelling at her insurance company, and corralling doctors, she spends her time playing peek-a-boo, dancing with Esmé, writing her doctoral dissertation, and breathing deeply.