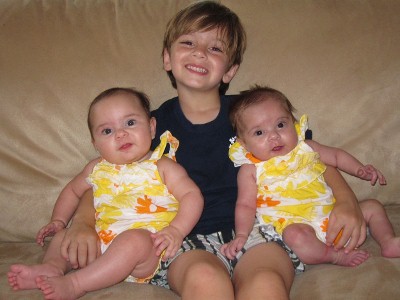 Years ago, my mother was diagnosed with Huntington’s Disease, a genetic neurodegenerative disease that quickly affected her muscle coordination and rapidly led to dementia. I lived for the moment thinking that I, too, would develop this horrible debilitating disease. I felt as if Huntington’s Disease would come any day and suck my life away. At the time there was no genetic testing available and they had not yet discovered what caused the disease. I started to reprogram my life; a life without a husband and children. A life without a future.

In 1993, all this changed, and shortly thereafter genetic testing became available. I was torn as this test would determine the direction of my life. I wasn’t sure if I really wanted to know the answer. After waiting almost a decade, I decided it was time. I was ready to move on. I contacted the genetic testing group and started the process, a long process where I had a mentor, a psychologist and a team of professionals making sure I was able, healthy and sane enough to handle the results of the testing, positive or negative. This was a team who fully described the genetics and science behind the disease. I had a 50/50 chance. I felt like someone was flipping a coin. From start to finish the process took about five months.

The results were negative. I did not have Huntington’s Disease. 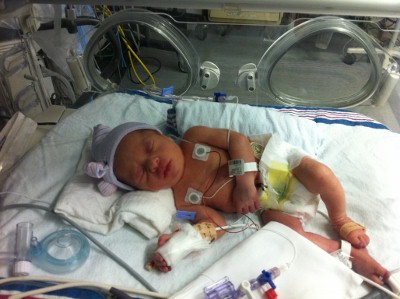 Kaitlyn as a newborn

I found myself able to move on with my life, to get married in 2003, to have my son in 2006, to become pregnant with twins in 2010. Then my world came to a screeching halt. The twin girls I carried were not healthy. My husband and I were told that they both had congenital heart defects. Serious defects including pulmonary atresia, tricuspid atresia, hydroplastic right heart syndrome, aortic stenosis, and non-compaction cardiomyopathy. At 25 weeks gestation we were thrown into making many decisions within a few days, sometimes hours. We were back in the genetics office this time with no mentors, no psychologists, and no support team making sure that we were mentally able to handle what we were about to hear.

Instead, the words the doctors said were crashing in our heads: You can still fly to Colorado to terminate. Your children will not have a normal life, will never experience a roller coaster, will never play competitive sports. They may have Down syndrome, trisomy 13, 18, or 21, DiGeorge, Turner or maybe Noonan syndrome. They will never give birth to babies of their own, and chances are they will not survive the pregnancy. Should you choose to continue the pregnancy you will never live a normal life, your poor son will have two very sick sisters, decisions need to be made today, and an amnio must be conducted immediately.

We sat there dumbfounded as we stared at 20 or so flip charts showing the chromosome makeup of different syndromes that could have caused these defects. My husband and I are smart, educated individuals, but we found it difficult to put all the pieces together. All we really wanted to know was would they be okay. We could hardly hear what they were saying through the heartbreak. 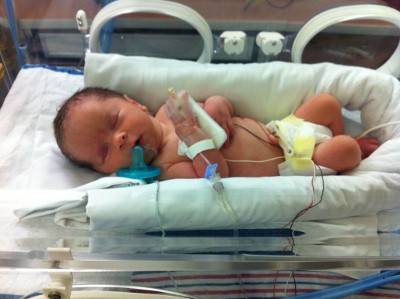 Mattingly as a newborn

Though I had not wanted to risk amniocentesis testing, once we learned of the girls’ health issues we decided this was the next step. We had the amniocentesis conducted a few hours later and waited for the preliminary FISH test results to return. There was no meeting, no hand holding, and we were given the results over the phone. No genetic abnormalities found. What does this mean? In our hearts we knew all along that these babies were ours and there was no way we were flying to Colorado to terminate.

We planned to use these results as a tool for preparation. We waited for the full amniocentesis results to come in, and once again, no genetic abnormalities found. Then we took the next step and proceeded with chromosomal microarray analysis. We were sure this would give us answers, but again, nothing. The only thing we found out through microarray analysis was that the girls were most likely identical.

After weeks of waiting for genetic answers, we were given nothing. There was no genetic reason for our girls to have these heart defects. We could not make a plan. We did not know how to plan their future. We could not use these genetic test results to help determine the direction of our little girls’ lives or to determine the direction of our own lives. All we knew was that we would do all we could to support them through a life that would be their own. 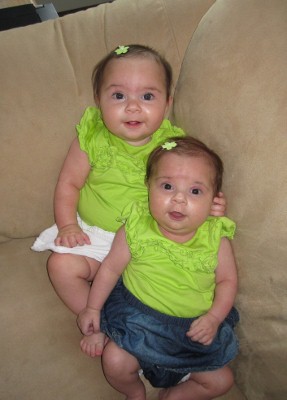 But we did learn something from all these tests. Sometimes you can’t rely on test results to decide your fate; you just have to follow your heart. You just have to flip a coin.

Lauren Cahill is mother to nine-month-old twin daughters Kaitlyn and Mattingly. Kaitlyn was born with pulmonary atresia, tricuspid atresia, hydroplastic right heart syndrome, pulmonary stenosis and non-compaction cardiomyopathy. Kaitlyn joined her family after 100 days in the NICU and has currently had four heart surgeries. Kaitlyn continues to amaze her doctors and steal everyone’s heart. Her twin sister Mattingly was diagnosed with non-compaction cardiomyopathy, regurgitation through the mitral valve, and a trace PDA. She is in the 95th percentile unadjusted in height and weight, crawling, and cruising along the walls. Lauren is also the mother of a smart and handsome five-year-old son Patrick and wife to a wonderful husband Jonathan. Together Lauren and Jonathan have advocated for their daughters’ health and quality of life. The girls’ success is a true testament of their hard work, devotion and love.