After months of hand over hand practice, it began when I least expected it. In hindsight, it was the perfect time and life was the best teacher. 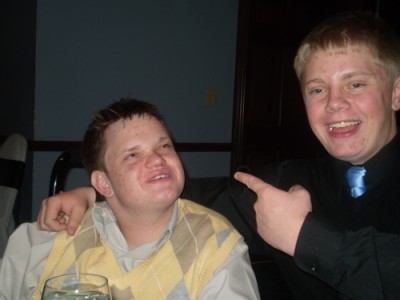 My son Ivar and I were taking a walk around the neighborhood. He was in his wheelchair, me pushing him, his communication device attached to his wheelchair, his voice always with him.

A dog was barking loudly; I was a little nervous hoping it was only bark and no bite. Ivar got upset. I thought I knew why. And then he spelled d-o-g. And then h-o-m-e. The dog was making him upset and he wanted to go home!

Ivar is 18 and was born with schizencephaly, a rare brain abnormality. He has cerebral palsy, uses a wheelchair, has well-controlled seizures, and has hydrocephalus that caused his total blindness at age five. When it was apparent that my son would never speak, I had a passion to find a way for him to communicate. He did well with pictures; he could point to things he wanted. He started to learn some simple sign language. Then he lost his sight and became totally blind. Pictures and sign language became useless.

That’s when I seriously pursued a communication device. It opened up the world to Ivar! I could always decipher pretty much what Ivar needed, wanted, or was upset about, but with his device anyone can! He can express feelings:  hunger, fear, tiredness or happiness, all without guessing games. He can answer questions and give opinions. He can say, “I love you, Mom.” He can say NO and it’s clear that’s what he means, which is very powerful in itself.

While he has a measured IQ of about 48, those tests don’t measure everything. I think it’s important to know this about Ivar because he is able to communicate using a communication device despite his physical and cognitive challenges. He forms his own thoughts using vocabulary and not preprogrammed sentences (other than special things). He is also a good speller and spells on his device, which helps him because he can’t possibly remember where every word is on his communication device.

Having a voice is the essence of being a person, whatever shape that voice takes. For my son, using a communication device has changed how the world perceives him. That is the biggest blessing.

For example, Ivar and I were waiting in a waiting room early in the morning once for a fasting blood test. The waiting room was quiet, with only about eight other people waiting. There was that little bit of awkwardness you feel because of people staring at my son in his wheelchair. He was anxious and hungry. He kept saying, “eat breakfast,” then, “waffles, bacon, and milk.” I kept talking to him about what he could do when he got home, and he kept telling me eat breakfast and what he wanted!

And then a few other people started talking to him and laughing. Some of those people left realizing that we often have more in common than we think! They also left realizing that the kid in the wheelchair they may have had pity for thinks, feels and can communicate.

Another time in the doctor’s office the nurse was asking questions before the doctor did his exam. “Do you have pain today, Ivar?” He answered, “Yes.” I gasped as it was just a routine exam, while the nurse asked him what was causing him pain. He answered, “My Mom,” and then laughed and laughed!

My favorite moment was last year when I got a note home from school that Ivar had called a classmate a “butthead.” Just let that sink in. Of course I had a conversation with Ivar about kind words and not so kind words, but still part of me was joyful that he said it!

For more information about AAC, visit www.prentrom.com, the company that makes my son’s communicator.

Patty Manning lives happily in Brunswick, Ohio with my husband, twin sons and Chocolate Lab, Suede. After many years as a stay at home Mom, she currently works as a paraprofessional in a public preschool for children with special needs.