Using a Picture Schedule Board to Reduce Frustration

“Mama, I don’t want you to wash my hair in the bath tonight,” said my almost-three-year-old. He’s non-verbal and this was his first official request indicating a preference, translated into a full sentence by me. For the last six months we’ve used a schedule board hanging by the dinner table and he is always coming up with new things to say through it.

Here’s how it looked that night: 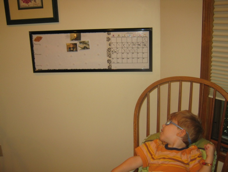 We were attempting to eat dinner when he craned his neck to check the board. This means, “What are we doing next?” So I filled in a picture of food for “eat,” then the “bath” picture and then a picture of him sleeping for “bedtime.” I tried to resume feeding him but he tried to look at the board again. Sometimes he likes to look at it more than once so I spun his chair towards the board. But he held this ridiculous craned neck position even though it wasn’t necessary to see the board. And he started moving his hand in our sign for “different” to the back of his head. We don’t have a sign word in that position so I was confused. He repeated his signing while craning his neck. It was like a game where I had to discover what he meant before he got frustrated.

“Different?” I asked. He grunted his “yes” noise. “Different, hurt?” I asked since we sign “hurt” by touching the top of the head. No response. And then it hit me. Only three pictures were on the board, one was bath, and he hates having his hair washed. “Different, hair?” I asked. He gave his “yes” noise and I finished the sentence for him. Once we had determined that I wouldn’t wash his hair in the bath that night he went back to eating and all stress was eliminated.

Many people believe that the dreaded “Terrible Twos” are a result of a child knowing what they want before they are able to communicate it. This phase could theoretically begin before age two and last well past the age of two in a child with communication challenges. Another popular belief in parenting is that many children rely on order in their lives to feel stable and comfortable. Combine these two thoughts and you’ll see why many preschools use a picture schedule board in the classroom to allow their young students to have a handle on their daily routine.

Having already mastered the use of our homemade picture communication system, similar to the PECS system, we had nearly committed to buying expensive software for his iPad computer. He had shown no interest beyond the initial mastery of the simple communication switches, but we used half a dozen basic altered sign language signs with relative ease. Still, we had a piece of the communication puzzle missing.

I personally found the large communication systems intimidating. I wasn’t quite sure what to do with all of those options. While our two-and-a-half-year-old certainly had that much to say, managing it as the adult was another matter. After complaining for months to our speech pathologist she suggested the old-standby schedule board.

Making a Schedule Board 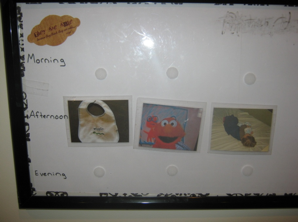 I chose a cheap plastic frame the size and quality of a door mirror. I took some paper and labeled a column on the left side with Morning, Afternoon, and Evening, and put the frame together as if those papers were the photos inside. On the outside of the frame I stuck round Velcro pieces that matched up with the picture symbols we already owned. At two and half years old, and being already familiar with the picture system, it took him less than two days to understand what I was doing with the schedule board.

He can request schedule changes, by signing “different,” and we can hold up various pictures for him to choose his activity. We give him advance notice for travel, visitors and unfavorable activities. We also use the board to accomplish various tasks, as in, “You must eat before watching your show, and then it’s time for you to take your nap.”

The schedule board is a simple communication solution easy to make and change on a daily basis. It can work for children of all ages and most cognitive or physical abilities. It’s certainly no coincidence that my son’s frustration level was greatly reduced after implementing this device into our lives.

Chelsea Webber is a mom to two boys, the oldest with a diagnosis of spastic quad CP and epilepsy. She enjoys researching treatment methods and health information and hopes to share it with others.