My son, Hunter, doesn’t enjoy spending a lot of time in his wheelchair. After an hour he starts to get antsy and wants to be able to stretch out and move. Other than the Tumble Forms Feeder Seat, he wants to be on the floor and stretching out and kicking.

I made him a mat when he was about two years old that was great for him. I took a queen sized foam mattress topper from Bed Bath and Beyond (don’t forget you can use the 20% coupons in the store!) and folded it in half. I wrapped it in a plastic mattress cover, taped it snug so it was tight on the foam, and then sewed a camouflage cover for it. 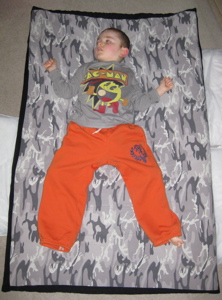 By the time Hunter turned five it was clear the mat was getting way too small for my little kicker! It was time to make a new one!! 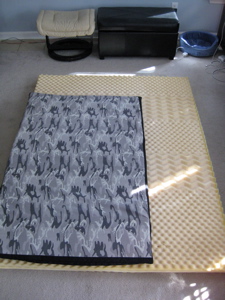 This mat was going to be a bit more challenging because of its size. I ended up buying three of the queen size foam mattress toppers from Bed Bath and Beyond (I also used three of the 20% off coupons!) for the padding since Hunter is quite the kicker and mover and he needed the padding for comfort and the space to kick. You can go as thick or thin as you want, but I figured three of them stacked together would be a good amount of foam padding for Hunter to be comfortable on the floor. If you can find thick foam in large pieces you could also use that, but I found it to be very expensive.

After I carefully stacked the three pieces of foam together so they were straight and even I decided I was going to “roughly” hand sew the foam together so that the pieces would not move and shift while my little man was kicking. This step took a lot of time but I am glad I did it because the foam stays together really well and you can move the mat easily and it is very solid. I did not sew neatly and with small stitches. In fact, most of the stitches were two to five inches long and were not straight lines. Instead, I just sewed all over the place! I did it for several nights in a row while watching TV and it wasn’t too bad. Once the foam was sewed together I trimmed the edges that had shifted while I was sewing to make them even. 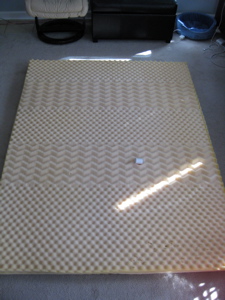 The mat was now ready for a waterproof cover! I made this next layer waterproof and I am GLAD I did. Sometimes we have spills and messes on the mat and all I have to do is take the top fabric cover off and throw it in the washing machine and wipe down the plastic waterproof cover. The foam stays dry and clean. The first plastic cover I used was another zippered plastic mattress cover. Unfortunately, with my kicker, it didn’t last long and he kicked holes in it very quickly. I then found some thick plastic table covers and that has held up pretty well so far. I duct taped the plastic covers snug onto the foam mat so that they wouldn’t shift and so there were no openings for messes to make their way through (I used a LOT of duct tape!). 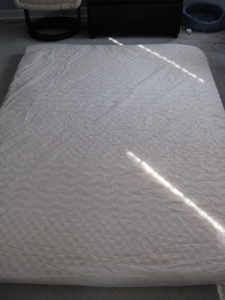 Next was the fabric mat cover. Because of the size of this mat, I decided to let an expert sew the cover. I went to my local drapery place and gave her the mat and the yards of fabric (I got 8 yards for $2.00 a yard at WalMart) I had bought and she said she could do it. I ended up using a jersey fabric because it is stretchy and it has been VERY easy to get on and off of the mat. Instead of doing a pillow case type of cover, I had her do a cover with an overlapping back flap. This type of flap keeps the mat cover in place while Hunter is kicking up a storm. With a pillow case type cover he would have been able to kick it up and move it around. The back flap lays flat on the floor and the cover stays on without moving at all. 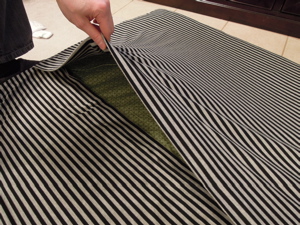 This mat has been great for Hunter. It allows him to move and stretch and he has plenty of room to grow. I actually had a good time putting it together too! In total I probably spent about $125.00 on all of the materials and $90.00 to have a professional sew the cover for me. If you are good at sewing it will save you a lot of money.

Here is Hunter kicking and enjoying his new mat! 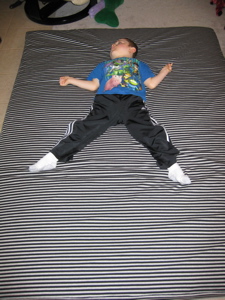 Dawn is from Georgia and is a stay-at-home mother to Hunter, who has daily seizures but is undiagnosed. His global developmental delays and excessive uncontrolled movements require her to be creative in finding ways to make him comfortable, find appropriate equipment, and adapt it so it is safe for him.