It Starts with Awareness 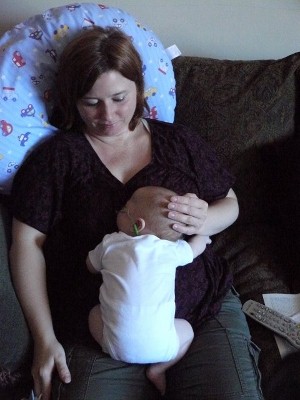 Before I had my son, Lucas, I didn’t give feeding tubes much thought. I didn’t know anyone on a feeding tube and I never thought of infants and children needing them. Like most people, all I knew about tube feeding was Terri Schiavo and the association of feeding tubes with the end of life. That was it.

When my son Lucas was about six weeks old I was struggling to feed him. He was clearly refluxing and I knew there was more to it than that. I started to Google. The information I found was technical. I remember reading about feeding tubes and thinking, “I hope we don’t need to go there.” Two weeks, an ambulance ride and two hospital stays later, I was meeting with the person who would become my son’s GI and advocate. She reassured me as she was getting him admitted that it would be OK. We could always do a feeding tube.

The relief I felt when we did our first NG feed was palpable. My son was finally getting the nutrition he needed. Of course it wasn’t that simple. We didn’t NG feed for four to six weeks to let him catch up and start to grow out of the reflux like we anticipated. I was in a daze. I felt alone and overwhelmed. We were back and forth to doctors, testing revealed little and we didn’t know what was wrong with our baby.

In January, 2009 after we had been tube feeding for six months, I found the Babycenter group on Babies and Children with Feeding Tubes. It was amazing. There were other parents in the same situation. I wasn’t alone, at least online. In person, not so much.

A Need for Awareness

I’ve spent my professional life as a market researcher helping the world’s largest companies communicate more effectively internally or through advertising. I even did a stint at one of the world’s largest public relations firms a decade ago. But it wasn’t until after Lucas was diagnosed and we had hit an even keel that I started to think feeding tubes need to be more effectively communicated.

Feeding tubes were making life possible for tens of thousands of infants and children, and very few people knew about it. Moreover, every parent I talked to seemed to have at least one (if not dozens) of stories of how friends, family or strangers didn’t understand the medical need for a feeding tube. Even if parents found a community online, they still needed to live in real life.

In market research we often use a funnel approach in communicating a message or a product. Think about a product you love. You found out about it, you learned a little more, you tried it, you loved it, you told a friend about it. That same principal could be applied to tube feeding and the general public.

It all starts with Awareness.

Pathways to Awareness and Advocacy 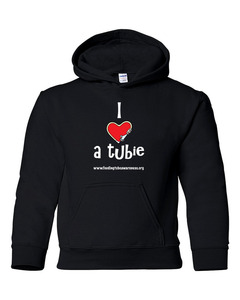 One of our biggest successes was launching merchandise like T-shirts and hoodies with our logo. It wasn’t easy, as our Chief Operations Momma will attest to. But now we can raise awareness one T-shirt at a time. It is grassroots, but it can be very effective. People ask what a “tubie” is and they become aware and maybe become more educated. Hundreds of shirts are already in circulation around the US and a few internationally. 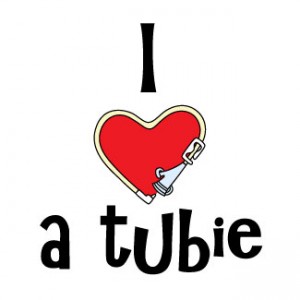 Our logo embodies what we are trying to do. Reposition tube feeding from something that is scary, icky and complicated to something that is friendly, approachable and beneficial—when it is medically necessary.

That is why we chose the term “tubie” over something more clinical like “enteral feeding.” Words matter in communications. I would be unemployed if companies didn’t need to better understand the words that people use and what words and images resonate. The emotional connection is important, too. It needs to be personalized. The heart is pure tubie love.

This is only the beginning. Feeding Tube Awareness Foundation is now a 501(c)(3) non-profit organization. We have the dual mission of sharing the pragmatic information needed in raising a child who is tube fed and raising positive awareness of tube feeding. We want to move people down that funnel to understanding and ultimately help them to become advocates.

Feeding Tube Awareness Week is the second week of February each year. Spread the word!