Three years go, when I was a junior in college, I had an amazing professor. Whether he realizes it or not, his lectures and philosophies have molded me into the person I am today and the person that I aim to be. This particular professor lost a wife to a prolonged progressive illness. While faced with her impending death, instead of shutting down, the pair became proactive and created a lecture on caregiving. The lecture they wrote together inspired me to write this article.

Dr. Wasicsko gave the lecture solo. He had already lost his wife, but her spirit was definitely in the room. Every student was glued to our professor, and most of us were in tears by the end. I stored that lecture away in my head, with no intention of ever needing it. Then I had Spencer. 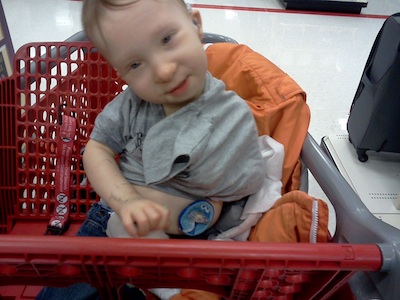 Spencer has Say Barber Biesecker Young-Simpson type Ohdo Syndrome (Ohdo for short). Ohdo is an extremely rare genetic disorder that caused Spencer to have heart defects, hearing impairment, low and high muscle tone, clubfoot, hypothyroidism, and apnea. Ohdo has also caused him to have Pierre Robin Sequence, including a cleft palate, laryngomalacia, tracheomalacia, and broncheomalacia, stenosis, hypoxemia, small jaw, dysmorphic features and feeding difficulties. Spencer was on continuous oxygen until he was eight months old, and sometimes still needs it at night, even at the age of two. He has had a feeding tube since he was one day old and requires feeds every three hours during the day. His food, a blenderized diet, is lovingly prepared by his dad or me every day. He is crawling and uses braces and a gait trainer to help him learn to walk. He wears hearing aids, which he hears fairly well with. While he requires a lot of care, I love doing it.

People often remark, “He must be a handful,” and I reply, “No, he is easy to take care of.” And for the most part he is. Doing his feedings and specialized care is first nature to us. What is exhausting are all the doctor appointments, surgeries, therapy, phone calls, and the waiting. Then you have to factor in all the “normal” mom stuff, and at times taking care of Spencer is a little overwhelming.

These are just a few of the issues I’ve confronted as a parent of a child with special needs.

Being a parent to a child with special needs is isolating. After having Spencer, I don’t relate to a lot of my old friends anymore. When you have a kiddo who is medically complex, you really figure out who your fair-weather friends are. My life is so different from many of my co-workers, so we usually small talk, but I don’t have the time to hang out with them after work. I’m also treated differently by people who don’t really mean to do it. No matter how positively I talk about Spencer, the second I mention I have a child with special needs, I get that, “Awww,” expression. You all know it. I hate the sympathy. Just because my child isn’t typical, doesn’t mean I’m sad about it. For the friends I still have, I don’t have time for them anymore. Even if I did, finding a baby sitter is next to impossible.

Many of us suffer from some form of post-traumatic stress; I know I sure did. I still have flashbacks from Spencer’s NICU glory days and burst into tears randomly from time to time. The smell of certain hand soaps makes me sad because it smells the same as the soap in the washroom before entering the NICU. My husband had PTSD as well. He hates to go to the hospital and avoids it when he can.

The stress overall can really take a toll. Not only do we have to caregive for a child, we also have to coordinate care. We have to juggle being a parent, a caregiver, and a personal assistant. My son has dozens of doctors and sees twenty something different specialties at our Children’s Hospital. I have to take him to these appointments and also make sure the doctor is putting Spencer’s best interests forward. We have to worry about surgery, testing, and the “what ifs” of his medical care. I constantly have to be on my toes, and I’m always worrying about something else that Spencer could possibly have.

Our marriages suffer. I once read that 75% of parents of a child who is medically complex are divorced. The rate is up to 90% of those who parent a child with Autism. My husband I and were separated for a brief period of time following Spencer’s birth. We grew apart because of all the stress related to taking care of Spencer (never Spencer himself). Not only were we new parents, but we were also new parents to a child with a lot of health issues. Single parenting was challenging, especially since I was trying to finish college at the same time. I didn’t get a lot of sleep in those few months and was constantly on edge.

My professor told us that primary caregivers are sick more often, have higher rates of depression, and higher rates of mortality. I believe it. I’ve gone through periods of depression. We all have those little hiccups, those days where we mourn for our children, whether it is what our kid has to go through, or mourn for the child we thought we were going to have. I usually can tell myself that I’ll be good as new tomorrow, and I take the day to mourn or do whatever I need to do, but for some it’s not as easy. Sometimes because we have sick children, our outlook can be pretty dark.

So How Do We Cope?

Apparently the key to being a successful caregiver is to balance caregiving and life. This sounds easier than it is. I know it’s hard to find time for ourselves, but it’s something we have to do. Even if it’s just doing something you like everyday, or having a few free moments of no-responsibility time, it will make a huge difference. I learned a while back that there are simply not enough hours in the day to do everything that I felt like I need to do for Spencer to be a good mom. I realized being a good mom is feeling like a person instead of a nurse. If momma is happy, the family is happy. While Spencer gets all his basic needs met every day, there are days where he doesn’t practice his physical therapy exercises or practice his vocabulary flash cards.

I also argue that caregivers need to find a person that can help. Whether it is a friend, relative, or a nurse, find someone who can give you a break every once in a while. I also realize this is also one of those things that sounds easier than it is. Depending on the severity of you child’s condition, she may qualify for nursing or respite hours. With nursing hours, a nurse will come into the home and provide care for a portion of the day. Respite care is temporary care aimed at giving caregivers a break, and is less frequent than nursing. These breaks, or even just the extra hand, really can help the caregiver recharge and reconnect with the world outside of home or the hospital.

Facebook. Yes, Facebook. I belong to several groups full of people just like me. People who don’t really have time for real life friends but still need to connect with someone. Who has time for support group meetings when you have a two-year-old crawling around at top speed trying to lick everything in the living room? (Yes, I have a sensory kid). My Facebook groups are always there for me, no matter what time of day. We laugh together, cry together, and ask one another for advice, even though most of us have never met in “real” life. BabyCenter also has some great online support groups for parents. Just stay away from the “normie” ones like the birth month clubs. Those will just bum you out because they mainly consist of parents of children who are medically typical.

I asked those same groups of friends how they cope with having a kiddo with special needs, and most of them said that they have an outlet. For some it is sewing, for some reading. Mine are World of Warcraft and watching bad reality TV on Netflix. An outlet allows you to take time for yourself, something as parents we often forget to do. You can do these activities after the kids are in bed, or while they’re distracted or napping. Many of my friends have created successful online businesses with their outlet projects.

Be proactive in your child’s care and remember knowledge is power. I make the majority of medical decisions in our family because I do the research. My husband is usually happy to let me take the reigns.

We also have an amazing medical team of doctors that are all Team Spencer and also know I’m a force to be reckoned with. This help alleviates some of the medical-technical stress in our lives. I trust our doctors and know that they want the best for him. They also know at times I’m a neurotic mess, so they expect frantic emails in the middle of the night. If I come across a doctor that doesn’t mesh well, I fire him. I’m in charge.

We also rely on our amazing group of therapists. You really need a therapist who goes above and beyond for your child. His therapists are his biggest cheerleaders and that’s how it should be. We have a great rapport and are doing the best we can therapy-wise to make Spencer the best Spencer he can be.

I think a huge portion of being able to cope is accepting our children. While we still talk in “whens” instead of “ifs,” (for example, “When Spencer goes to college…”) we also realize that Spencer will likely have severe learning disabilities. While we still have hope, we also live in the moment rather than dwelling on the unknown. Sometimes people don’t get better. Sometimes our children won’t get better and it’s heartbreaking and takes on its own mourning process. The best thing you can do in these situations is to live in the now. We also focus on the things that Spencer can do, not what he can’t. Today is what really matters. The future comes slowly, so we’ll adapt along the way. Right now we just do our best to make him happy and watch him grow.

You can also focus on the positive aspects of caregiving. You are taking care of someone you love. You are growing as a person and learning all kinds of new things. Spencer is the best thing that ever happened to me, and being his mom has become an amazing learning experience. Being his mom has made me into a fierce supermomma. I have become so much more assertive and almost fearless in a way. With him, I have survived what most “normies” would consider their worst nightmare, and we’re thriving, because we’re awesome like that.

We caregive not only because we have to, but also because we want to. And while this lifestyle isn’t exactly what we signed up for in the beginning, it’s our life now. I wouldn’t change mine for anything.

A special thanks to Dr. Mark Wasicsko for being awesome!

Rachel Nichols is a stay at home mom to Spencer, age two. They live in Ashland, Kentucky. You can follow their journey at Joining the Club Foot Club.