When I went into labor on March 28, 2005, I had no idea how much my life would change. My baby wasn’t due until the end of April, so we were a bit surprised when my labor progressed so rapidly. Our baby’s heart rate was dropping with contractions and then stayed down, so I was taken to the operating room to deliver our baby by Cesarean. At 4:20 pm I saw the tiniest little girl I had ever seen, but I never heard that beautiful first cry. 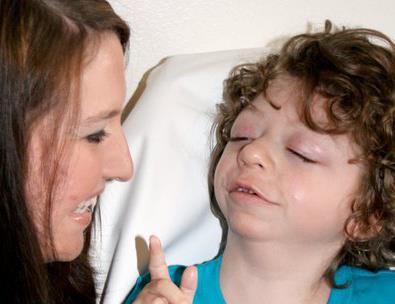 The next time I saw my little girl, Josie, she was in an isolette on a ventilator. She was brought into my room by a NICU team. When I asked if she was going to be OK, the only response I got was she was stable enough to transport to the NICU. I felt so helpless not being able to go with her. Nothing could have prepared me for that moment. She was so tiny. I was so scared to touch her with all the wires and tubes coming out of her. She didn’t look like the little girl I saw the day before.

The only thing I could see to touch was her tiny little hand; and then she curled her fingers around mine and I knew she knew I was there.

She got a little better each day and on day five, I got to hold her for the very first time. That was also the day I saw her open her eyes. They were the most beautiful color of blue and she looked like she had a star pattern in her eyes.

When Josie was two weeks old, her neonatologist asked us to come speak with her. Josie was having a rough day keeping her oxygen saturation where it needed to be, so we were a bit worried already. She explained to us that her genetics test had come back and Josie had Williams Syndrome. My husband and I both looked at each other with disbelief. When we asked what it was, she said simply, “I Googled it and this is what I found. I have never heard of it before.” That was the only information we had at the time.

Williams syndrome (WS) is a genetic disorder caused by a deletion of a small segment of the long arm of chromosome 7. This region includes the elastin gene. It occurs in approximately 1 in 10,000 births. Williams syndrome is characterized by mild to severe medical issues, mild to moderate developmental delays, a distinctive facial appearance and a unique personality that combines over-friendliness and high levels of empathy with anxiety. WS can affect every system in the body. Medical problems may include cardiovascular disease caused by narrowed arteries, elevated blood pressure, kidney problems, gastrointestinal issues, limited joint mobility, thyroid issues and optical issues. Attention Deficit Disorder is extremely common in WS and often requires medication. All individuals with WS have learning disabilities. Williams syndrome is also associated with a characteristic cognitive profile of mental strengths and weaknesses composed of strengths in verbal short-term memory and language, combined with severe weakness in visuospatial construction.

Many anomalies have been reported in people with WS, but expression of the syndrome is highly variable from person to person. Also, some anomalies are readily apparent and may be recognized at birth while others are subtle and may go unnoticed until much later. Still others are developmental and do not exist until later on, such as learning disabilities. Also, there is great variability in the severity with which characteristics may appear and in the degree to which they cause difficulty.

We continued to watch Josie grow but noticed she was getting tired when she drank from a bottle. We made the decision to have a G-tube put in Josie’s stomach. Four days later we finally brought our little girl home. She was so tiny; barely six pounds.

Eight days later Josie contracted RSV while waiting for a doctor’s appointment. We made it one night at home with my husband and I taking turns suctioning out her airway so she could breathe. We noticed the next day she was really struggling to breathe and her lips were turning blue. We took her to the emergency room and she was transported back to the hospital by ambulance. We stayed with her that night, clearing her airway every 15 minutes. The next morning she seemed to be doing OK, so we decided to run home so we could shower and then come back to the hospital. We called on our way to check on her and the person who answered the phone said they had an emergency and couldn’t talk.

After we got home, we called back and the emergency was Josie. While she was in her room by herself, she had a seizure. Her oxygen saturations had dropped to 44 and she was given resuscitation medication. We were also told she may not be able to survive another seizure of this severity. We informed the doctor to call a priest and have him meet us in her room.

The drive back to the hospital was pure silence. I was going over every detail of her funeral service in my head to make sure it would be perfect for her. I couldn’t believe I was having to think about this for my little girl who was only two months old. I didn’t have a chance to be a mom to her yet and I was very mad. We arrived at Josie’s room in record time and as promised, a priest was waiting at her door. We put our yellow gowns on and I held my little girl as she was baptized.

To that point, it was the scariest moment in my life. I felt like I was helping her let go. My husband walked out of the room with the priest to thank him and I had my moment to say the things I needed to say to this beautiful little creature that had come into my life. I told her I loved her so much and she was the most beautiful thing I had ever seen. I would always be her mommy and we would always be her family, but if she was too tired and it was too hard to fight, she could stop. I told her she wouldn’t hurt anymore and she would have the most beautiful wings. I had to tell her it was OK.

Well, she didn’t let go. It took three weeks, but each day she fought a little harder and got a little stronger. When she was finally well enough, we were able to take her home. Her muscle tone had changed and she had completely forgotten how to suck out of her bottle, so she became totally reliant on her G-tube for her nutrition.

Right around this time, I began to try to find other people who had children with WS. I felt like I was the only parent with a child like her and no one could tell me if the problems she was having were normal or not, because none of the doctors she had had ever heard of WS. One mother had told me about a geneticist who studied WS and was in Las Vegas. We petitioned our doctors to let us take Josie to see her so we could get a plan on what to expect with Josie. We had a blood kit sent to us that we sent back to the doctor.

A little over a month went by and then we were on our way to Las Vegas. Josie was mesmerized by the lights on the strip. I loved seeing her eyes trying to take it all in. We met with the geneticist who explained Josie did indeed have WS, but hers was a little different. The typical size of the deletion was 2.5 microbands; Josie’s was 10.3. This was amazing and heartbreaking at the same time. We also learned that children with WS can also have a reaction to anesthesia and go into spontaneous cardiac arrest. This was very scary because up to this point, Josie was having surgery every six months.

We now had a list of things we needed to work on: nutrition, therapies, scheduled blood tests and ways to reduce anesthesia exposure. There is no cure for WS, but there are ways to treat the various problems associated with the syndrome. There is no standard course of treatment for this very complex and uncommon disorder. Individuals with WS require evaluation and subsequent monitoring by multiple specialists, including regular cardiovascular monitoring. Physical, Occupational and Speech/Language therapy is also recommended. Treatments are based on each individual symptom.

Josie has been the best unexpected blessing in our lives. We have seen some very scary times, but they don’t compare to the amount of joy and happiness she has brought to our family. I would have never met all the extraordinary people and families who have been touched by WS if it wasn’t for Josie. I have cried over the phone with people I have never met, but we share the joys and milestones as well as the setbacks and heartaches. We continue to fight for our children for answers, awareness and hope. I have lost count of the number of times people have asked me, “How to handle all that is being done to her without leaving the room?” My response is, “She is my little angel and for some reason, God thought I was the best person to be her mommy, so as long as she doesn’t leave my side, I don’t leave hers.” 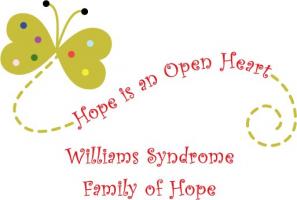 Spreading awareness is key. Educating physicians, therapists and educators is imperative. For more information on Williams syndrome or to make a donation, you may visit us on Facebook.