Growing Up with Rachel:
Play from a Sister’s Point of View

There are two things that I feel very blessed to have had in my young life: my sister’s smile, and my keen memory.

Let me back up. 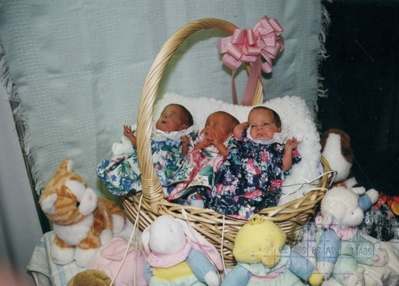 My sister Rachel and I were born February 7, 1996 as 25-week preemies (four months premature). My sister Lauren, born three days prior, was already waiting for us in the NICU. In the beginning, I was the one not expected to make it. I was expected to never survive at all, and if I did, I would be profoundly deaf and have severe jaundice and food allergies. But, God stepped in, and performed at least 100 miracles during our first year of life.

Long story short, my sister Lauren went home from the hospital on our “unbirthday” (due date), May 22. I went home on my four-month birthday June 7th, and Rachel was finally able to rejoin our trio on Thanksgiving Day, 1996. She was oxygen dependent, immunocompromised, and had been diagnosed with severe cerebral palsy (CP), unable to eat by mouth, speak or move around on her own. 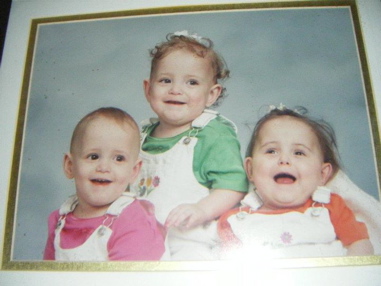 There are memories I wish I had, that have only stuck with me through my mom’s stories. Things like playing on the exercise ball Rachel had for PT, putting a doll on a soccer ball and imitating the exercises I saw the therapists doing with her, and giving Rachel a doll to hold when my other sister and I played Barbies.

From age 2.5 through kindergarten, Rachel went to a special school for kids who had CP. Lauren and I went to a mainstream preschool and kindergarten, but attended daycare at Rachel’s school about once a week. The academic times were separate, but the kids with CP and the mainstream kids had playtime together. I didn’t even notice. I have vague memories of playing with kids in walkers, and being used to an aide always standing by my new playmate. I didn’t see the impairments…I saw the new friends I could make.

In 2002, between our kindergarten and first grade years, my family moved cross-country. Rachel’s special-ed classroom was right down the hall from mine, and I remember having so much fun being a frequent guest. 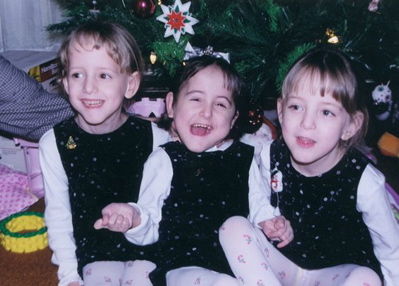 After school, my mom would often get into conversations with teachers or other parents, leaving the three of us bored. There was a long hallway, a clear path from one end of the school to the other. Rachel and I would play racecar, as I ran up and down that passage, sound effects included, as Rachel laughed and laughed.

When I was about eight, I put my foot on the back, trying to ride her chair like a scooter. Rachel and her chair fell backwards, leaving her flat on her back. At first she was startled, but once she realized she was okay, she giggled hysterically as if saying, “That was fun! My sister’s an idiot! Let’s do it again!” Lauren and I weren’t strong enough to pick her up, but luckily a teacher saw us and helped get everyone upright again. Even today, eight years later, my mom still thinks it was our heavy backpacks on the back that tipped her over.

Those races have really stuck in my memory, and I wrote a poem about it last year:

Beep beep!
Traffic is backed up,
A busy commuter sighs.

Vroom! Vroom!
The crowd cheers,
The driver is ready.

Squeak! Squeak!
To a closed eye,
The horn is rubber,
The rush-hour bridge is carpet,
The racetrack is linoleum,
The wheels are plastic,
and the driver is a sticky-handed toddler.

But to the wide open eye of a child,
the world is as big as his imagination.
This is fun, this is creative, this is play—
the work of a child

Vroom! Vroom!
The racers are ready,
They take off,
the engine roars,
as tires squeal against the track.
To the closed mind,
they see a child, pushing another child—
who is in a wheelchair.

To the closed mind,
This little one is deprived, helpless, sickly.
And the one who is pushing—
Well what a great heart she has!

To the wide open mind of a child,
They are just going for a ride,
Faster than any old plastic car,
And much easier for two to play.

Vroom! Vroom!
The driver imitates the tires’ squeal,
Her passenger laughs in glee.
To the wide open mind of a child,
the world is as big as their hearts.
This is fun, this is creative, this is play—
The work of the children.

In October of our fourth grade year, I went with my dad to pick Rachel up from school. She was laying in a plastic box, open at the side, bottom and partially on the top. The walls were lined with colorful Big Mack switches and various toys. Rachel would lift her arm from the floor, look like she was waving for a second, and hit the button. “Rachel turned on the fan!” her aide’s voice said, as the small fan blew her dark hair across her face. She laughed. When we prompted her to reach for another one, she stretched to reach the yellow button. A strand of small Christmas lights glowed over her head. “Rachel turned on the lights!”

An exercise meant to help her with her motor skills and teach cause and effect turned into one of the last playtimes with my sister, something that’s engraved in my memory forever. I loved seeing her so happy, I loved seeing the pride she had because she could make something happen. I’ll never forget that.

Rachel died in her sleep six and a half years ago, October 5, 2005. We were nine years old and in the fourth grade. I’ve been so blessed since then with the support of family and friends, and I’m thrilled to know Rachel is really running and dancing like she dreamed of in Heaven.

I’m still surprised at how many people talk about her. Rachel’s legacy hasn’t only stuck with my family, but with her teachers, my teachers, my friends and much of our community. Rachel was an angel, and a ray of sunshine. She was impossible not to love, and I just have to be thankful everyday for the compassion, patience and empathy she brought into my heart at such a young age.

The author, Emily, writes:  My name is Emily, I’m a proud triplet and a proud “Sib.” I will be a junior in the fall, and I love to write, hike and eat. I’m involved in the school’s marching band, debate team and Best Buddies (a program that pairs students with a disability to a student without in one-to-one friendship).