Our daughter, Chloe, was four months old when she contracted what we thought was just a mild summer cold. She was a relatively healthy baby other than reoccurring ear infections, so when she started to cough and sneeze we assumed it would be a couple of rough days and she would be fine. On the third day it was clear she was getting worse, and whatever it was she had was too much for her little body to handle. 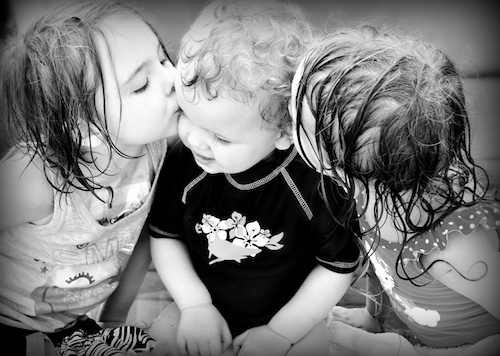 Upon a trip to the ER we found out just how much difficulty she was truly having. Both of her lungs had partially collapsed, she was not responding well to oxygen, and she was really struggling with the overproduction of secretions her lungs were making. Although they were certain they were wrong since it was the middle of summer, they decided it was worth testing for RSV. To our shock, the test came back positive.

Respiratory syncytial virus, often referred to as RSV, is to most adults and healthy children one of the many causes of the “common cold.” Symptoms of RSV are nearly identical to all other cold viruses. It is impossible to tell if you are carrying this strain of virus without laboratory testing. To most it is no worse than the symptoms of seasonal allergies. The problem comes in when this virus is passed to a vulnerable infant, or a child who cannot fight the virus like we all would.

Many infants with RSV develop bronchiolitis, an inflammation of the smallest airways. Because infants have small airways to start with, bronchiolitis can have a severe effect on their ability to breathe. Many infants develop wheezing, fast breathing, nasal flaring, retractions of the chest muscles, and may even start to turn bluish from lack of oxygen.

Our infant daughter, who prior to contracting RSV was healthy, ended up being hospitalized for over a week. On her third day of hospitalization we had an emergency meeting with the PICU team. Chloe was not responding to oxygen and was requiring over six liters just to keep her oxygen saturation levels in the high 80 percentiles. As parents we were terrified. Never did we think that a “cold” could lead to the possibility of intubation.

Chloe is now four years old and still lives with the effects of contracting RSV as an infant. She struggles throughout the year with reactive airways, and has developed asthma as an effect of her lungs being damaged by the virus. A large number of children who have a severe case of RSV as an infant will go on to develop asthma, though the causal relationship is not fully understood. This is a scenario that could have been possibly avoided, if others understood the devastating effects this virus can have.

Two years after Chloe’s run-in with RSV we were blessed with a baby boy, Caelum, who was born with a compromised airway. Not only does he have bronchomalacia, chronic atelectasis, and scarring, he also suffers from the effects of mitochondrial disease. We watched our son constantly contract bronchitis, and become oxygen and suction dependent in his first year of life. If we did not already have enough reason to fear RSV, we knew that Caelum fit into the category of children who cannot fight RSV properly. Caelum had a high likelihood of respiratory failure or even death if he were to contract this nasty virus. Our original fear of the virus became almost an outright panic.

It is necessary for Caelum to receive full preventative measures. Not only do we have to really limit his outings during RSV season, he also receives an injection called Synagis every month throughout the RSV season. Synagis provides antibodies that help children like him fight off RSV. We are lucky to say that we got through an entire RSV season without contracting the virus. We are prepared for the fight again this year.

Unfortunately, Synagis is extremely expensive and it is hard to get approval for it unless you fit into a defined class, such as children who were premature, who have chronic lung disease, who have certain forms of congenital heart disease, or who have neuromuscular disorders. The American Academy of Pediatrics has complete recommendations on which children should get Synagis.

RSV is a nightmare to parents of children who are susceptible to the devastation it can cause. Everybody can take measures to help protect themselves and others from passing it this cold and flu season. Please limit your exposure to babies and sick children when you are symptomatic, even if you believe it is only allergies. Also please always practice good hand washing. Most importantly, never touch someone’s baby without asking. You never know what you may be carrying, or what they may be susceptible to. To learn more about RSV and preventing the potential of spreading it this winter please visit https://www.rsvprotection.com/.

Kate is a mother of three from Virginia Beach, two of whom have mitochondrial disease.