You wake up in the morning to the sing-song sound of birds outside your window—oh wait, no, that was a dream—instead it’s a beeping pump letting you know it has run out of food. You walk into your child’s room and it hits you—the lovely aroma of ammonia. Yep, pee. Everywhere. Again.

You strip the bed, strip your child, give him a bath, get him clean clothes, put clean bedding on (well you try–except you realize that you didn’t wash the wet bedding from yesterday either so, nope, no clean bedding until after you run the wash), go to throw a load of sheets in the wash only to realize both the washer and dryer are still full from the night before. And you completely forgot to start either of them. You never imagined THIS when you would hear other parents talk about their child being a “heavy wetter.” You know what I found out being the parent of a tube fed child? Those other parents have NO IDEA what a “heavy wetter”really is.

In the four and half years that I have been the mother of a child on a feeding tube, I have learned ways to cope with the massive amounts of overnight pee. First there was the godsend of nighttime diapers from Huggies and Pampers. They definitely held more than regular diapers, but still not enough. So next we bumped up a size (or two) since the larger the size, the more they would hold. Yet we STILL had leaks.

I started collecting waterproof crib pads anywhere that I could (thanks Grandma for holding on to so many of them over the years!) The disposable ones worked great when my son was trapped in a Tucker Sling up on a huge bed wedge and couldn’t roll or move. But, alas, the day came when he was set “free” and he could move and roll all around his crib—and believe me, he DID! The disposables pads would just bunch up in a wad and be nowhere near under my child’s bum come morning. 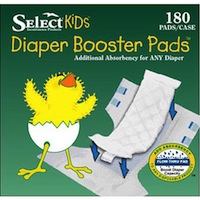 One day I was wandering around Babies”R”Us wishing that diapers had to put on the label exactly how much pee they could hold before exploding when I saw it. The holy grail. A package of “Diaper Boosters.” I hadn’t seen these before, so I picked them up to read the package, and OMG! I could put these INSIDE of his diaper to hold even MORE! I was way too excited by this possibility. We definitely bought a pack or two right then and there and I couldn’t wait to try them out. In the morning we had DRY SHEETS! I was so excited! It’s so funny the things we moms get excited about.

I had also found another option instead of just the Babies”R”Us brand boosters that I could only find AT Babies”R”Us (which of course was an hour and half drive from my house one way.) There were now Hybrid diapers that were popping up all over the place. Apparently they could be a cloth diaper or a disposable diaper because you got to choose the insert type that you used. And you know what? Those disposable inserts were AWESOME to use as a booster (a booster that absorbed the same amount as a regular diaper without having to actually double diaper!) And it felt nice knowing that it would break down in a landfill. The package even claimed I could even flush them down the toilet or compost them if I wanted to! Not that I ever composted anything in my life before (maybe I should try?).

Time went by and each morning I was struck by something: that was one heck of a diaper I was throwing in the trash every day. Who knew a diaper could grow so incredibly large? I felt like we were throwing out an entire large trash can full of diapers each week (and I don’t mean like a kitchen trash can—I’m talking like those huge lawn clipping trash cans!) and boy could I SEE just how that was adding up in our diapering costs as well.

Since before I was even pregnant I knew that I had wanted to at least try cloth diapering. Like most other couples, we received tons of packages of disposable diapers at our baby shower, so I figured I would make my way through those before I really thought about trying out cloth. (I guess I should say it was really before I thought about talking my husband into trying cloth. I knew he would cringe at the thought of washing a diaper and using it again!) But then our son was actually born and his health issues were all encompassing.

Taking the time to research and plan and order and try—that just wasn’t happening. But by the time he was a year old, I figured things were about as calm as they were going to get and I decided to take the plunge. You remember those Hybrid diaper inserts I was using? Well, I bought a couple of their diaper covers because they were just so darn cute I couldn’t help myself. I took some of our old burp rags, which I knew were SUPPOSED to be a cloth diaper (at least that was what the package said when I bought them anyway) and folded it up and shoved it inside of the cover. I really didn’t think it would work, but you know what? It did! And the “ick factor” wasn’t nearly as bad as I thought it would be. I mean seriously, after being covered in pee, poop, and constant puke for the last year, changing a cloth diaper was NOTHING.

So I pressed on. It took a long time to figure out what really worked best for nighttime and cloth diapers. And honestly, as long as the disposable diapers held out, I was just too squeamish to experiment with different options. I think that was one of the hardest things about cloth for me to really figure out. But after we came to the point that not even the disposables were holding up, I started the experimenting.

So here we are. After YEARS of cloth diapering and experimenting with pretty much everything on the market, I am going to share my secret combination with you that keeps my kiddo (who has on average 1260mL while he is sleeping at night) waking up dry over and over again: 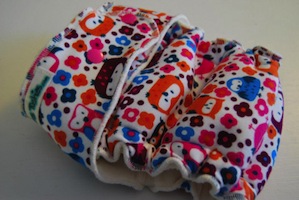 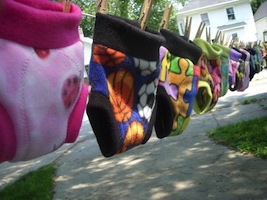 Granted leaks DO occasionally happen, so I do still keep a reusable Chux pad underneath him.. Though a majority of the time it is because of user error (also known as Daddy put on the diaper and it was way too low in the front so someone just peed right up and over it! Crazy how the happens, huh?). A chux made up of flannel, Zorb, and PUL, so it absorbs fast and wont leak through, is perfect reassurance.

I whole-heartedly believe that PUL is superior to any of the vinyl or plastic bed pads that are on the market. PUL was originally developed for hospital use. It is a waterproof fabric that is still permeable (breathable!) and can also be tossed in the autoclave (depending on how it is made, anyway.) Because of this you can wash (on HOT!) and dry bed pads made out of PUL again and again without worrying that they will break down or fall apart on you. It also still allows air to pass through, keeping your child’s temperature much more comfortable than sleeping on the typical vinyl pad.

It was so hard to find what I really wanted, what really worked for the extreme heavy wetter, AND came in larger sizes that would fit my child as he grew. I decided I would make things easier on myself and figure out how to make what actually worked. After helping other friends who were having the same issues with their children on continuous night feeds and TPN, TUBEalicious Tushies was born out of necessity. In addition to my two kids, TUBEalicious is my baby. I make lots of items to help keep kiddos dry: waterproof bed pads, wheelchair/stroller/car seat pads, Med Port Covers (stop that tubie from feeding the bed!), and of course cloth diapers for babies and children. My Step 2 Overnight! Diaper can hold approximately 1300mL with no additional inserts. Now that is A LOT of pee!

I have decided that cloth is just what works for us. It keeps my kids dry, and actually cuts back on my laundry (which I know sounds counter-intuitive since I am now washing diapers, but washing a load of diapers once or twice a week is MUCH easier than a whole load of sheets and bedding every day!). Of course, going full-time cloth just doesn’t work for everyone. Sometimes just cloth diapering at night will help save your sanity. Or you can even use reusable cloth inserts INSIDE of a disposable diaper to soak up all of that extra fluid at night. You can also use Soakers on top of a disposable diaper to help stop those occasional leaks. So there ARE lots of options out there to try!

I know what it feels like to be at your wits end, and it seems like there is no end in sight to that pile of pee-soaked laundry, but I just want you to know that there ARE options out there to try! Experiment to see what works best for your child AND for your family, and stop dreading waking up to that aroma of ammonia every morning.