by Shelley Colquitt and Linda Kruger

Several months ago, I very innocently posted in a social networking site about how my daughter, Mighty Z, was in a “normal” classroom setting. Based on all of the comments I received, you would have thought that I had said the most offensive word ever. 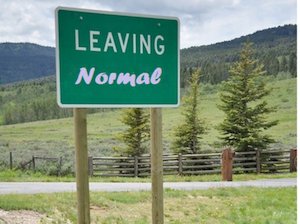 A private message from a friend kindly told me that the word normal was now viewed as offensive and I needed to use the word “typical” when talking about children who did not have a disease or syndrome. Normal is slowly becoming as offensive as the “R” word (retarded). Of course we couldn’t call it the “N” word, so what should we call it? The “Nor” word or the “Mal” word?

Oy vey! Now I am confused…should I be offended that my kid is not (gasp) normal? I think I figured that out 11 years ago. But, because I, too, wanted to be a part of the in-crowd, I tried to be offended by the word normal by looking up the meanings of both words: normal and typical.

To me, normal and typical mean the same thing. But abnormal and atypical? That means your child is zigging while everyone else is zagging.

So what is so wrong with normal? Does it make Mighty Z less that she does not conform to the standard or to the common type? Or that she deviates from the standard? No, Mighty Z is, in fact, an individual person.

Maybe we should call ourselves the “new normal,” well, because it sounds so chic.

We stick out. Not because one is on a ventilator, but because we are individuals who celebrate not conforming to the standard, or to the common type, and that we do indeed deviate from the typical. We have taken the back streets by zigging…streets never known by simply zagging.

It is not the normal people who change the people around them, but it is the abnormal (or should I say the “new normal”) ones who make us see the beauty in the world.

Shelley Colquitt is the mommy of two beautiful girls, Lauren and Zoe. Her youngest daughter was born at 40 weeks. As she was celebrating the success of the labor and delivery, her baby stopped breathing. Later, her daughter was diagnosed as having a rare disease that only 163 babies in the world had at the time (11 years ago). She had to learn to take care of a baby who had a trach and was on life support machines 24 hours a day.

Not only is Shelley busy with her two girls and works very hard to keep her youngest chronic medically complex child healthy, she also volunteers at a shelter for abused/neglected children and also volunteers as a teacher’s aid for children who are globally delayed. She writes about the ups and downs of dealing with a child who is complex, chronically and critically ill. Read her blog at http://confessionsofasleepdeprivedmomma.blogspot.com/