Celebrating Feeding Tube Awareness Week
For the Love of a Tubie

If someone had told me four years ago this week that my daughter Raya would still be getting 85% of her calories from tube feeds four years later, I wouldn’t have believed it. And I probably would have cried. The last four years have been filled with things that I could never possibly have envisioned for Raya as a newborn (or infant, or toddler, or self-proclaimed “big girl”), and the feeding tube has been the most visible of those things. 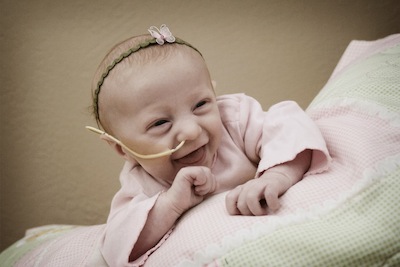 For the first two months of her life, everything had been a struggle with Raya. But once she began getting tube feeds of specialized formula, she was almost a completely different child. I knew that she needed the tube at that point and I was relieved when the GI said we would be going home with it. Not because I WANTED a feeding tube to be part of our lives, but because I knew it was the right thing for her at the time, and I knew that as long as it was there, I could get whatever she needed into her.

I also remember thinking that we would probably use the tube for a couple weeks and then be done with it. She had improved so much after her formula change that I really felt like the upward trend would continue once we went home and we’d be taking it out shortly after. Even so, there was a part of me that knew deep down that it would be more than a couple weeks. I never fathomed at that point in time that it would be four years later and she’d still be 85% dependent on it, but I had a feeling that it wasn’t going to be a matter of weeks either.

One of the feelings that I remember most clearly was the shock of reality beginning to set in that this really was happening. Being trained on “dropping an NG” was one of my requirements before I could take her home. I sailed through it on the first attempt, thanks to nurses who were great teachers, but couldn’t shake the thought that I couldn’t believe I was doing this to my baby. Then the rep from the supply company came and dropped off the machine and supplies that would now take over my role as the provider of nutrition for my baby.

If I had to sum up that day in one word, it would be OVERWHELMING. As we loaded up the wagon with all of the supplies we would need in order to continue feeding her with the NG tube once we were home, I couldn’t believe that this was really happening. Really, an IV pole in my living room??

As time went by, we started to feel more of a sense of normalcy surrounding Raya’s medical life, and by that I mean that the medical supplies and equipment that had invaded our house no longer felt so foreign. It all just incorporated itself into our “normal” and I got to a place of acceptance. It didn’t happen all at once. It is a process that happens little by little and sometimes starts back at the beginning and has to happen all over again. 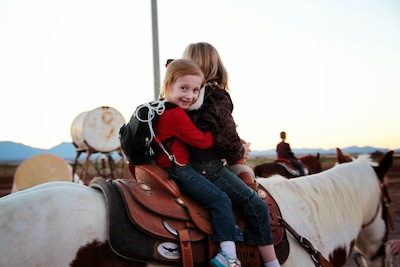 Acceptance is also NOT all-or-nothing. Some aspects of having a child who is medically complex are more difficult to accept than others. I think the first thing I had to learn to accept was that despite my very best exhaustive efforts, Raya just did not tolerate my breast milk, much less thrive and grow on it. With her being my fourth baby and having successfully breastfed the other three, I did not expect for that to happen and was not prepared for the intense emotions that I experienced with the switch to the specialized formula that she needed. As we built her formula into our routine and I stopped agonizing over pumping breast milk that she couldn’t have anyway, and as she began steadily gaining weight in spite of the chronic vomiting and reflux, I grew to love that formula. (But let’s not confuse loving the formula with loving cleaning formula puke out of everything and prepping formula every single day since then….)

Other things are still in process. Accepting the fact that Raya will have to depend on someone other than my husband or me at times to take care of her—and someone else will take temporary charge of her health in a place other than our home—has been hard. Sending her to school where I know they won’t put her G tube in if it comes out was hard to accept because even my 10-year-old can handle that job, and a simple tube pull-out could easily turn into emergency surgery. Knowing that the older she gets, the more time she’ll spend in the care of others is hard to accept. Not having answers to the questions people ask me about how long she will need the tube and why she has the problems she has and knowing that there may not really ever be answers to all those questions is hard to accept.

More so than not being able to answer other people’s questions, it is hard to accept that we just don’t know what the future holds for Raya. We know what is holding her back right now but there are no easy answers as to how to fix those problems. THAT is hard to accept. If there was one thing I absolutely did not comprehend at the beginning of our feeding tube journey, it was that the need for patience can span years. Quick solutions are a rarity in the medical world. The norm is, “let’s try this and wait and see if it helps,” and that is VERY hard to accept.

Acceptance is not easy, but it is absolutely important. Raya does not remember a time when she didn’t have a feeding tube. That tube has ALWAYS been a part of her body. In fact, at preschool a couple weeks ago the teacher had the kids draw pictures of themselves. Her teacher told me when I came to pick her up that Raya had drawn an extra little circle on her stomach and said that it was her “tubie.” The feeding pump has been her constant companion since she was big enough to start wearing it in the itty bitty backpack at about eight months old.

For me to be outwardly resentful towards Raya’s feeding tube or anything that comes along with it would be sending her the message that I don’t like part of her. I would never want her to feel rejected by me, especially because of something that is not even her fault. I think one of the greatest lessons I have learned in the past four years is that nobody should be defined by their limitations, or by what their perceived limitations are. It’s easy enough to say that but it’s entirely different to actually see it evolve before your eyes. I’ve been to literally hundreds of doctor and therapy appointments in the past four years. I’ve listened to medical professionals pick apart and analyze every little delay, defect, and dysfunction they could find. It’s their job and it’s a necessary part of the process. 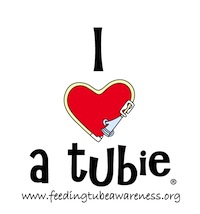 Raya hasn’t seemed to pay much attention to them, though. She just keeps on finding ways to do what she wants to do and be who she wants to be regardless of what obstacles are in front of her. What others see in tube feeding as a limitation or a reason to pity her, she sees as completely normal and not a big deal.

Someday tube feeding will probably be a part of her past, but not yet, and that’s okay. Without the tube as a way to get full and adequate nutrition into her body, she would be extremely developmentally delayed, both cognitively and physically, due to the severe lack of nutrition. In essence, Raya quite literally would not be the little girl we know today without her feeding tube. It does not define her, but it sustains her life and supports her growth and development. With that perspective in mind, it is impossible for me to not love her feeding tube for all that it’s done to keep her healthy and happy. I couldn’t say that four years ago and mean it, but I truly can say it now.

I ♥ A Tubie, both the girl and the tube itself! Please join us in celebrating Feeding Tube Awareness Week!

Brandis is momma to Raya, the inspiration for her popular blog Feeding Raya, as well as 3 older children. As a photographer, she contributes to the all things multimedia at Feeding Tube Awareness Foundation. She also volunteers as a Tubie Surgeon for Tubie Friends.