From Pancakes with Syrup to TPN:
Our Daughter’s Battle with Dysmotility

We have watched her struggle. 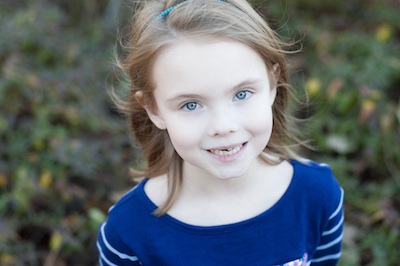 There are few things in life that will strip you to your core quicker as a parent than watching your children battle illness. You feel for them in a way that not only makes your heart experience their physical pain, but also leaves your soul wanting nothing more than to take it from them and put it on yourself. There hasn’t been a day since her battle started that we haven’t begged to be able to take this burden from her, but knowing her, she wouldn’t want that. Her strength and perseverance are beyond admirable, and she has taught us more in her short time here on Earth than we ever thought we could learn.

Our daughter is seven years old and is living with the daily effects of mitochondrial disease. It is a multisystem progressive disease at the cellular level. Her cells do not produce enough energy to support organ function. It typically affects organs that require the most amount of cellular energy: heart, lungs, GI tract, brain, and muscles. Though she struggles with many of these systems, her GI tract is among the worst.

She was born with a typically functioning GI tract as far as we know. Sure, she had common infant reflux and the occasional rotation between diarrhea and constipation. But nothing suggested that only five short years after her birth our daughter would be relying on IV nutrition for survival.

She loved food. I remember every food milestone with her. Perhaps it was God’s way of preparing me of what was to come, but my fondest memories of her involve food. I remember ever coo and “nummy” noise she would make while breastfeeding, those sweet sounds that tell you they are fully enjoying their meal and begging for more. I remember the tears as her “biter biscuits” would get too small and we would have to take them away before they became a choking hazard. Taking this child’s food was of the upmost offense, and she could easily reduce you to tears. I remember her complaints in her highchair as we couldn’t catch the puree drippings with a spoon quick enough to re-feed. I remember how she could eat a can of puffs in one day, when I thought they were supposed to last a week. I remember how she suckled on her first ice cream cone, enjoying every last melting drip; her love for spaghetti and how she wore it from head to toe afterward; the way she would carefully eat a grilled cheese, savoring every last buttery bite. I remember her notoriously sneaking handfuls of birthday cake just because she simply couldn’t wait.

And I remember when that all began to change.

At three and a half our daughter had begun to show signs of an underlying medical problem. She had developed hypotonia, she had several bouts of pneumonia and kidney infection, she had lost previously developed skills after her illnesses, and had begun having seizures among other issues. Although no one knew what was wrong, they knew something was wrong. As parents we didn’t know what to think, but it was clear to us that she was struggling. Eating started to become a task for her instead of a pleasurable experience. The question was why?

Though she would still eat breakfast, the rest of the day was a constant struggle. She would ask for food, sit down to it, pick at it, and then beg to be done. At first we thought she was going through a phase. We were certain of it, but as the months went by she started to become chronically dehydrated from lack of fluid intake and began to lose weight. Her doctors, as well as us as her parents, became convinced there was more to it.

We quickly found that she was struggling with dysmotility in her colon. She consistently had a large amount of stool that was not being relieved despite a somewhat normal stooling pattern. She began requiring a cocktail of medications to help relieve this, but despite their ever-increasing efforts, even when she was at her best, she still wasn’t eating or drinking enough to fully sustain herself. When she tried, she would often be reduced to tears, with a stomach that was bloated and hard, feeling full all day no matter how little she had been able to force herself to eat. It was a struggle that was not only very painful to watch, but one that led to an additional diagnosis of delayed gastric emptying, and no choice but to place a nasogastric tube to help support her, while we desperately tried to figure out why our daughter’s little body was changing so fast.

Not even nine short months after our daughter had developed her first signs of gastrointestinal issues, a muscle biopsy revealed that she indeed was suffering from a rarely known genetic disorder called mitochondrial disease. Though it explained the difficulty we were having, it was not the answer we were hoping for. It revealed that our daughter’s cells were not providing enough energy to her GI organs for proper function, something that we could hope to support with treatment, but something that would also likely get worse over time.

Unfortunately, it wasn’t long before our daughter’s small intestine was also showing signs of being affected by dysmotility. By four and a half she had a G tube placed and was put on a full nutrition plan. She was no longer eating by mouth, and rarely was able to tolerate the amount of nutrition necessary for proper growth.

Over the following year she began developing chronic ileus and pseudo-obstructions, which were places in her intestines where the peristalsis became temporarily paralyzed. During these episodes our daughter could not be tube fed. Any attempt to feed directly into her intestine through her GJ tube, a feeding tube that bypasses the stomach and feeds into the small intestine, would cause episodes of reverse motility. Reverse motility is a condition where pressure in the intestine is so great that food and bile backs up from the small intestine into the stomach, and in some instances the peristalsis is actually reversed.

She was in terrible pain most of the time. Her abdomen was distended with air and fluid so much so that at times her body was unrecognizable to us. The little girl who once filled our days with peanut butter smiles and sticky syrup kisses hadn’t eaten food in nearly a year. Now our days were filled with tears, pain, and frustration. These episodes were coming closer and closer together, she was spending more time in the hospital, tolerating less nutrition through her gut, losing more weight, and it was becoming clearer by the day that we were quickly losing the use of her GI tract.

A few months after our daughter turned five, not even two years after her system began to show its first signs of real trouble, she could no longer be fed through her gut at all. She was no longer able to sustain her nutrition, electrolytes, or blood sugars through feeding into her small intestine. She had entered what was referred to as intestinal failure, and began requiring IV nutrition, Total Parenteral Nutrition (TPN), through a permanent venous catheter in her chest.

We were heartbroken and confused about how quickly things could change, and how something like this could happen to her. There were days where we felt like strangers to our own lives, on the outside looking in.

It has now been over two years since our sweet girl was placed on TPN. It has been a difficult road full of ups and downs. These years have contained some of the scariest chapters of our lives, as well as some of the most beautiful life affirming moments. As she struggles to regain even the smallest amount of function in her gut, we are her biggest cheerleaders. Her perseverance and drive to get better is something that super heroes are made of.

She has redefined her love for food through a passion for cooking. She loves smelling, tasting, combining and manipulating flavors, and one day aspires to be a professional chef. Despite the fact that she is still dependent on IV nutrition, she loves every facet of life that involves food. She loves to go out to eat and order dishes, just to taste things, sometimes just to smell them. She doesn’t let her struggles bring her drive to fight down no matter how tough things get. She is truly an inspiration.