Samantha was born at 26 weeks 4 days, weighing only 1 pound 9 ounces. We were involved in an auto accident that caused preterm labor. Knowing she would be early, I was given steroids to help mature her lungs. It worked and she only spent four of her days in the NICU on a ventilator. However, her prematurity caused a host of other problems such as cerebral palsy, epilepsy, brain injury (from the accident itself), and visual impairment. She has spastic quadriplegic CP and has used a wheelchair since she was two. Despite all of this, she has (for the most part) always been a very happy girl. 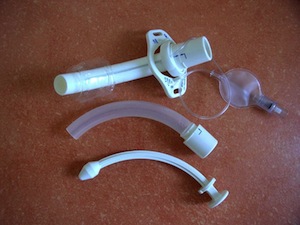 Samantha has always been a noisy breather, but when she was 10 years old, it got worse. She started to snore…badly. After visiting the ENT doctor, the decision was made to remove her tonsils and adenoids. It didn’t help, and she still sounded like a lumberjack.

Not only was she snoring, but she also wasn’t sleeping well, waking every hour or so. After about three months of this, she could barely breathe while laying flat. A sleep study was finally scheduled, and she had the best night’s sleep in months. When we got the results, we were shocked. Sam had over 20 full episodes of apnea in only six hours!

We met with the ENT again to discuss options, and we decided on a trach, as I wanted something guaranteed to work with only one procedure. The surgery was scheduled and we started to get ready. At her pre-surgical check up, she was unable to keep her oxygen saturation levels above 75, so we were sent by ambulance to the children’s hospital for an emergency procedure instead of waiting for the scheduled day.

Surgery went well, and we were into a PICU room within 2.5 hours. We both slept better that night than we had in what seemed like forever. Within a week, Sam was back to her usual, happy self, but that caused another unexpected problem. Because of her disability, Samantha uses hyper-extension to move her body, and when she did this with her neck, the trach tube would pop out of the stoma. Due to this, her hospital stay was extended while custom length trach tubes were made for her.

In the eight years since it was placed, Sam’s asthma issues have all but gone away, and she has a much easier time when she does get sick. All in all, I think the trach was probably the best thing that could have happened for her.