The Complexities of Moving a Child with Special Needs

This past summer we took a giant leap of faith and moved from the St. Louis, Missouri area to Jacksonville, Florida. While such a move for most families is challenging, for our family having a child with special needs, it was going to be a herculean event. 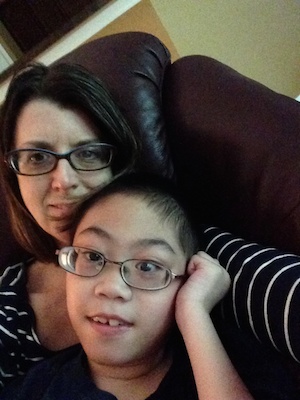 Our son Jonah is eight years old, and is diagnosed with cerebral palsy, epilepsy, and mitochondrial disease. He has a gastrostomy tube and is tube fed four times a day. He is on 12 different medications that he gets 22 times a day, ten each in the morning and evening, and two in the afternoon. Moving Jonah was going to be like moving a mountain.

Planning Ahead: Determining if Needs Can Be Met

Prior to my husband Andy even applying for the job in Jacksonville, I researched the medical care available and the schools in the area to make sure Jonah’s needs would be met. After spending countless hours on the internet, researching all I could find, and contacting a friend of a friend who lives in Jacksonville, we felt like Jonah’s needs would be met if we moved there.

Some of the things you may want to consider when researching include the following:

The day Andy called and told me he got the job offer, I have to admit that I was less than enthusiastic. We had already agreed that if he got the offer, we would go. But the weight of what it was going to take to move Jonah fell on me hard that day. The task seemed insurmountable. On one hand, I was excited about moving to Florida, especially since the milder winters would be so much easier on Jonah. On the other hand, I had no idea what pitfalls lay ahead. Moving Jonah away from the only place he had ever lived, away from the physicians, therapists, and school we trusted, suddenly didn’t seem like such a good idea that day. I knew I was going to have to take it one step at a time.

The first thing I did to transition Jonah’s medical care was to call the children’s clinic in Jacksonville and get a preliminary account set up for him. They provided me with a fax number so I could start getting his records faxed from his current providers. I contacted all his current physicians and the hospital and signed release of information forms for each to get his medical records faxed. It took a lot of phone calls and paperwork, but it really wasn’t that difficult. It really paid off because once we got moved and I started making appointments for him, his records were already there waiting for his new physicians.

The next thing I did ahead of the move was start talking to the home health agency that provided Jonah’s tube feeding supplies. Since Jonah’s sole source of nutrition is medical formula that goes through a tube in his belly, there was really nothing more important than making sure that we did not run out of formula. I worked with a wonderful woman at our old agency who went above and beyond the call of duty to ensure Jonah would not run out of formula prior to us getting established with a new home health agency. The new home health agency was proving to be rather difficult to work with because they wouldn’t talk to me or accept the prescriptions for his feeding supplies until we had our new insurance information. The woman at our old agency was aware of this, so she provided us with all the formula our outgoing insurance would provide, and then offered us three more weeks of formula that we paid for out of pocket at a 30% discount. It was well worth it knowing we did not have to worry about running out of formula or supplies.

I learned it was important to get established with a pediatrician or primary care doctor prior to making appointments with specialists. When I call to make an appointment with a specialist, they always want to know who the primary care doctor is. In one week alone, I made or received over 30 phone calls just getting Jonah’s care transitioned, including calls to doctor’s offices, his home health agency, and the pharmacy. It was quite a busy and stressful week. Now we are in the process of going to all those doctors’ appointments, finding out their views on Jonah and his condition, and discovering how things are done differently here.

Changing insurances or Medicaid programs can be very challenging. We had a lot of problems specifically with prescription coverage. Just prior to moving, I filled all of Jonah’s prescriptions that I could get filled. Once we got moved and it was time to fill some prescriptions, I took the bottles to a pharmacy to get them transferred. I was nervous about it because he was still covered by the old insurance, but it all went smoothly. But then once our new insurance kicked in, we found out the pharmacy I had chosen was not on our new prescription plan, so we had to pick a new pharmacy and transfer all his prescriptions again. At this point, I thought I was done. What I had not anticipated was transferring all his prescriptions from his old doctors to his new doctors. Oh how I long for the day when I can just call in a refill using the automated system and not having to go in myself or call and talk to the pharmacy for a refill. We are almost there, but not quite yet!

In order to transfer a new school district, I contacted the school district that we were planning on moving to and spoke with a special education coordinator. I faxed Jonah’s IEP for her review and we were able to discuss his potential school placement. I also looked up all of the registration requirements on the district’s website. I started a folder to keep all of the required documents and the forms that would be needed. During the move, I kept this folder with me at all times. I did not want to lose it. I also learned what the residency requirements were, so once we got moved, we could register Jonah as soon as possible. I wanted to give the school plenty of notice that he would be there.

Overall, the move has gone really smoothly, although there were times I had to remind myself that people with disabilities are allowed to move and there is no law saying we can’t. We are not seeking to do the impossible. I stayed diligent and tried to think through each challenge. I took lots of notes and did not hesitate to make a call to stay on top of something.

The hardest part for me was trying to be patient. It is nerve-wracking to have to rely on so many other people to do their part for the continued health and well-being of my son. However, we are getting to all the doctors that we need to see and we are getting good medical care. The feeding supplies are being delivered in a timely manner. Jonah loves his new school and is thriving and learning. And we are getting settled into our new home and life.

Moving Jonah was one of the most difficult challenges I have ever undertaken, but it was not impossible. Moving a child with special needs is daunting, but I did my research, pulled on my resources, and made lots of phone calls. I hope by sharing our experience I can encourage others who may be considering a move with a child with special needs that it is indeed possible.

Jennifer King is a stay at home mom to 11-year-old Amelia and 8-year-old Jonah.