My son, Nicholas, has West Syndrome, also known as Infantile Spasms. West Syndrome is a catastrophic seizure disorder affecting children from age birth to about two years old. It affects children differently, but it has left Nicholas totally disabled. He is unable to talk, sit up, hold his head up, or make any coordinated movements. He also has a cortical visual impairment, which may or may not improve over time. 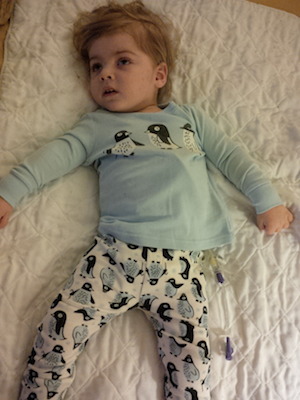 The prognosis for children with West Syndrome varies, but is generally poor. If these types of seizures can be identified by a well-trained neurologist early, then there is a better prognosis and the front-line treatments are much more effective.

When Nicholas was nine weeks old, we saw him making strange movements that turned out to be these devastating seizures. After numerous tests, we have discovered that Nicholas has a change in his CDKL5 gene. For girls that have CDKL5 disorder, it is known as Rett Syndrome. For boys it is rare, and there is only just now research being conducted to find out more information to treat this devastating condition.

Some of the treatments we have tried include the Ketogenic Diet, a vagus nerve stimulator, and between 12 and 15 medications. Unfortunately, all have failed. Nicholas is currently taking five seizure medications, yet still has seizures every day. He has failed all of the front-line treatments, including the potent medications ACTH and Sabril.

There has been a large movement to get a form of medical marijuana approved to help children who have seizures. In Colorado, where it is legal, there is a cannaboid-based oil called Charlotte’s Web that has helped hundreds, if not thousands, of children find relief from seizures. Nicholas’ doctors have told us that we are basically out of options, so we are desperate to be able to try this CBD oil. Children who were unable to speak or even hold their head up have been able to say words and support their own bodies with this treatment. Even as I type this, that thought makes me shiver and tear up to think that we could have that kind of response from Nicholas. Unfortunately, it is not yet available nationwide due to differing state regulations on medical marijuana use.

Our lives have had to be adjusted in a way that is almost indescribable. There is not a day that goes by that I am not having to make a phone call or send a text to one of this three therapists (speech, vision and physical), or battle with the pharmacy or the insurance company to get his medications. His three case managers are also always fighting to get him the care he needs or some piece of equipment that has been ordered. Equipment just to make his life easier takes FOREVER to arrive due to the mountains of paperwork that have to be completed by numerous different people.

Last November, Nicholas was admitted to the hospital because after having a seizure, he aspirated everything in his stomach into his lungs. He was discharged 32 days later with a GJ tube, which is both a blessing and a curse. Like many other parents, I feel like each time we come away with a new procedure, medication, or treatment, it’s another mark against Nicholas and us. Now we can’t even give Nicholas any of the wonderful things that healthy children can enjoy like ice cream. At the same time, it makes it so much easier to get those all-important medications into his little body. Awake or asleep, he gets those meds at the same time every day, which does lower our stress level.

We are a family that really likes to get out of the house and go to the park, dinner, the movies, or do anything together as a family. With Nicholas’ condition our outings are all but impossible. He can’t get out of his stroller, and it is a tight fit in some restaurants to leave him in it. One of his medications makes him sensitive to heat, and we live in eastern North Carolina where the summers can get both hot and steamy, so even strolling him down to the beach is an issue because we worry about him overheating.

I know other parents reading this will just be shaking their heads thinking, “Yes, same here.” I have found myself doing that when I go on Facebook pages for Infantile Spasms and read other parents’ questions and concerns. Nicholas is almost 2 ½ and we have been dealing with this practically since he was born. I almost feel like one of the veterans now on this topic and can answer questions.

Sometimes you wonder why God puts you on Earth. I have had those thoughts from time to time, but now I know my place in the world. We also have a seven-year-old son, Noah, who is a fabulous big brother and has handled this situation better than I could have ever imagined. I am Noah and Nicholas’ Mom, Jeff’s wife, and I wouldn’t have it any other way.

People ask me all the time how Jeff and I do it all. I don’t really know. What I DO know is that I’m glad God gave us Nicholas because we will take care of him and fight for him. We will dedicate our lives to bettering his.

Dia is wife to Jeff, a police officer, Mom to Noah (7), Nicholas (2) and also serves as Deputy County Manager for Halifax County, NC. She has a Bachelor of Arts Degree from Campbell University in Public Administration and a Master’s Degree in Public Administration from Appalachian State University. Though she has ZERO medical training, she has learned a lot in the last two years! They live in Enfield, North Carolina with their two dogs, Rosie and Jackie Chan.