Connecting to a Circle of Care

Today, my family uses technology to coordinate our son’s complex care in the community, but it wasn’t always so. Nicholas is 26 years old and resides in a small care home in our neighborhood. He is non-speaking and medically complex, requiring one-to-one nursing care 24/7. For the first 22 years of his life, Nick lived at home with us and I struggled to communicate important messages between home and the multitude of home care workers and medical professionals who were part of his care team.

I do not have that struggle anymore. A software program called Tyze Personal Networks now effectively connects everyone who cares for and about Nicholas. Tyze is owned and offered by Saint Elizabeth Health Care, a Canadian not-for-profit organization that has been supporting people at home for more than a century.

Tyze is a private and secure online network that was developed to combine the efforts of family members, friends and professional supports in a circle of care. It is free to individuals, but becomes more valuable when supported by a healthcare organization. Each personal Tyze network is password-encoded and not publicly searchable. It has enough data storage to allow for a virtual filing cabinet of medical records and even highly sensitive documents such as wills and end-of-life directives. Healthcare provider organizations in Canada, the US, and beyond use Tyze to reach out to their clients, inviting them to start their own care networks. Most importantly, Tyze gives organizations the ability to share information with all network owners – for example, education materials, newsletters, videos, updates, and events. 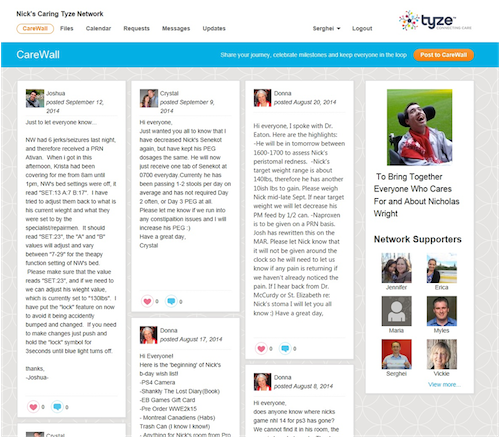 Before we were introduced to Tyze, Nicholas had a bedside, hospital-style chart where caregivers recorded both health and personal information. There was also a separate drug chart where staff signed for medications given. If Nicholas’ morphine dose changed, I couldn’t be sure that staff would see the notation in the bedside charts, so we installed a white board above Nick’s bed. There, we wrote important messages in large red lettering, hoping that new directives begun by one caregiver would be followed by the next one, especially if I was not home to point them out at shift change. Too often, a part-time health aide would give the old dose of anti-seizure medicine or morphine, assuming that nothing had changed since the previous week. They simply didn’t see the notes we had left.

Today, we still use the bedside charting, but we do not rely on it to communicate messages of change in care protocols or important appointments coming up in the diary. Tyze Personal Networks shifts the responsibility for care from an individual model to a network model. A traditional, individual model of care looks like this: 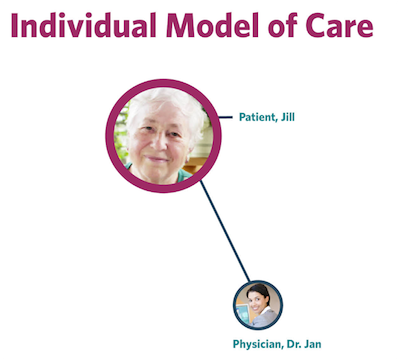 An individual model of care assumes autonomy on the part of an able-bodied patient– someone who is verbal and capable of following through on measures for treatment compliance at home. This was not the case for Nicholas. No single individual could keep Nick alive and healthy–he needed a team. Tyze gave us the communication tool we needed to effectively function as a network of care, which looks more like this: 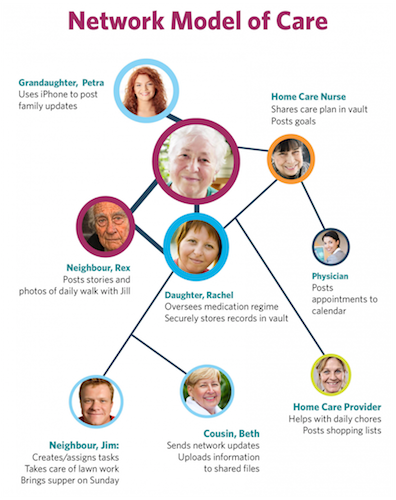 The home page of Nicholas’ Tyze site includes all his front-line workers, members of our immediate family, executive staff members at the care home where Nick resides, and his family physician. Staffing agency case coordinators are part of the Tyze network too, and when there are last minute HR issues to be solved, everyone can offer to help and stay in the loop.

Tyze has many features that enhance both social opportunities and continuity of care. For example, specialist medical appointments as well as recreational outings are entered into the calendar feature, and network members receive timely reminders on their smartphones. Network members report feeling group solidarity because everyone has shared and equal access to information about Nick. Tyze has made it easy to share resources, to ask for help and problem-solve within the group.

“How did you persuade medical professionals to be part of a Tyze network?” is a question that many curious friends ask. The answer is not straightforward. In the case of Nick’s GP, he understood immediately that an online tool would help him to manage complex care involving multiple players, but he was concerned that he would be bombarded with messages. He was relieved when we assured him that only the head nurse would send him private messages via the Tyze site. Plus, recent changes in allowable physician billing codes mean that our doctor can now be paid for the time he engages with Nick’s Tyze network.

The trickier barrier to getting Tyze up and running was compliance on the part of frontline care staff, especially after Nick moved out of our home and into a care facility. Every agency or institution has its own in-house communications linkages, such as an intranet. At first, it was necessary to remind staff that their intranet excluded Nick’s family members, but eventually everyone realized that the corporate knowledge of complex care was better managed as an integrated team with equal access to information shared by family and paid staff. Everyone began to appreciate the benefits of a single communication tool.

Like any tool, Tyze is only helpful if users populate it with pertinent information. When frontline staff members forgot to input appointments, I reviewed all my communications strategies and looked for ways to improve compliance. I realized that posting “need to know” information on Tyze, such as staff shift rotations and holiday schedules would draw people to Tyze. Eventually, Tyze became the go-to site for all Nick-specific information. Now, if Nicholas has an emergency hospital admission, his network members know they have access on their phones to his medications list as well as his care plan.

Nicholas does not use Tyze himself, but it is only because he would rather use his laptop and iPad as sources of sports news and social media. Still, Nick reaps the benefits of being cared for by a well-coordinated team of people who love him and share his care. And for that, we are all grateful to Tyze.

Donna Thomson is the author of The Four Walls of My Freedom: Lessons I’ve Learned From a Life of Caregiving (House of Anansi Press, 2014). She is a disability and caregiving activist, consultant and blogger at The Caregivers’ Living Room. Donna also teaches families how to advocate for care in her workshop, ‘How to Know What You Want and Get What You Need’ at The Advocacy School.  Donna’s family has a Tyze network for her son Nicholas and another for her mother who is 93.