When A Feeding Tube is Forever 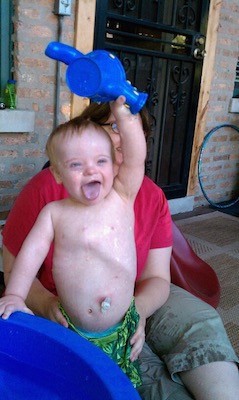 My seven-year-old son Bobby has been on a feeding tube since he was one month old. Born with Down syndrome and a serious heart defect that put him in congestive heart failure soon after birth, his rapid and labored breathing was incompatible with being able to suck and swallow. We assumed the nasogastric tube was temporary–something to help him safely gain weight in preparation for impending surgeries. It turns out the tube is here to stay.

Weighing the Risks and Benefits

During his first year we tried oral feeding a few times, but never with any success. He screamed and struggled every time our hands went near his mouth. The resistance was likely a mixture of sensory issues, oral aversions caused by multiple intubations, and flat out fear of us putting food in his mouth that he did not have the coordination or strength to swallow safely. Even our feeding therapist was stumped.

His heart condition required a series of three surgeries, the last one near his third birthday. We were unwilling to absorb any risk of aspiration in this period where his oxygen saturations rarely made it out of the 70s. So, at one year we consented to a gastric tube placement and accepted that the move to oral feeds would have to wait until his heart was fixed. Instead we used brushes to address his oral sensitivity without the pressure of involving food.

We restarted feeding therapy soon after his last surgery. Due to his medical problems, he was still not walking, and in fact had never crawled. He butt-scooted all over his house. The scoot solved Bobby’s mobility frustrations, but the lack of crawling was disastrous for his core strength and his sensory development, as crawling desensitizes our hands to different sensations.

He did not have the strength to swallow safely and could not tolerate food on his hands or face. He did physical and occupational therapy both privately and in school to work on his tone and sensitivities. When he was five, we began introducing him to various types of food, with the understanding that he did not have to eat but only taste. We learned he loved licking dill pickles, eating the salt off of a chip, and sucking slices of sour fruit.

However, if we tried to feed him pureed food of any noticeable volume (even a fraction of an ounce), he screamed and tossed his head back and forth until the threat of a spoon was removed. We took a break and enrolled in a top feeding program located in a neighboring state. When we showed up for the initial appointment after not having offered food for months, he actually accepted some small amounts of puree and swallowed to the satisfaction of the therapists.

We gave him purees on a regular basis after that, maxing out at about one ounce taken over twenty minutes. If we pushed for more or quicker bites he often choked, his face turning shades of blue as he struggled to cough out the puree. He learned to take bites of food, spitting the remnants into a bowl instead of chewing and swallowing. We worked on drinking from both straws and open cups, but he consistently dribbled the liquid out of his mouth and over his clothes.

Last summer, Bobby had an updated swallow study. We found that he did not allow liquids past his front teeth. As for purees, he would allow them in his mouth until they fell to the back of his throat and he would reflexively swallow. He could not coordinate a swallow on his own.

So, after much soul searching, we decided to stop therapy. It was an incredibly difficult decision in that I felt like a failure as a mother to not be able to feed my son orally. But that said, Bobby’s development was otherwise taking off, and we wanted to focus our therapeutic insurance dollars on areas where he stood to make the most progress. Since speech and feeding therapy come out of the same insurance bucket, we decided to put everything into improving his communication.

We offer Bobby food at every meal, and with the pressure of formal eating gone, he examines our plates for food he wants to try. He enjoys it, and we hope this will allow him to more seamlessly participate in the social elements of meals out with friends. He rarely takes bites of anything, but enjoys the experience of various tastes.

He does not miss eating. The tube in his stomach has been his source of nutrition for so long that he does not equate oral bites with self-sustenance. If he ever shows an interest in learning more, we will certainly support him, although we are realistic that he will eventually reach an age where progress will be difficult.

I still feel guilty. Part of it is the noise from outside people who insist he would eat if we withdrew tube feeds. My mama job is to block that out in the knowledge that Bobby does not have the physical ability to eat even if he wanted to. Instead, I focus on the fact that my partner and I made decisions to maximize Bobby’s survival chances when his heart was failing. Post-surgery we had a boy who needed developmental help in nearly every area, and we used our resources to help him become a healthy, mobile boy who enjoys life.

For me, the last statement is the big lesson. At the beginning of this journey I believed that a feeding tube was not compatible with a good life. Not so. The feeding tube has instead provided Bobby with consistently good nutrition as we juggled the other medical and developmental goals in his life. He isn’t doing well in spite of the tube. He is doing well because of it.

Anne Penniston Grunsted writes about parenting, disability, and family life from her perspective as a lesbian mama. She has been published in The Washington Post, Brain, Child Magazine, Mamamia, and is a regular contributor to RoleReboot. She lives in Chicago with her partner and son. More of her work can be found at Anne Penniston Grunsted.