Adventures in Conventions and Cosplay:
Everyone is Welcome!

by Jennifer A. Peterson

Comic Con. Dragon Con. Gen Con. These events are annual meccas to celebrate everything in the realm of science fiction, gaming, and favorite characters within the fantasy genre. Think of it as your closest group of several thousand peers who jump at the opportunity to geek out and be a little weirder than usual for a few days. Chances are that you have heard of the terms “cosplay” or “cosplayers” over the past 10 or 15 years, because they are now considered part of the popular culture. Cosplay is the concept of dressing up as one of your favorite characters (or real people) in a way that emulates their existence.

Halloween was always my favorite holiday, and the idea of getting a second chance to go in costume other parts of the year caught my immediate interest. Since I’ve known my husband, he has always been big into gaming (computer, board, cards – you name it) and attended Gen Con nearly every summer since the late 1990s. One of my primary memories included taking a photograph of The Gaming Elvises. When I thanked them for the courtesy, they replied, “Uh, thank you. Thank you very much.”

Once we were married, I took the opportunity to attend as a spectator in 2002 when it was still held in Milwaukee. My goodness, it was a blast! Here I thought I was going to be stuck watching my husband and his friends play Magic the Gathering for a full day – nope! Those who dressed up took pride in their costumes, makeup, and character acting. Not only that, but these conventions draw people of all ages, ethnicities, and abilities. Watching the Parade of Costumes was the culmination of this gathering. I was inspired to participate. 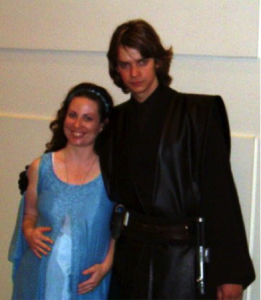 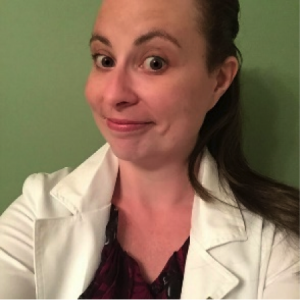 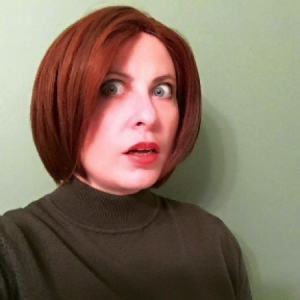 While I didn’t start until my adult years, my cosplay portfolio has spanned from a pregnant-in-real-life Padmé (Star Wars Episode III), Molly Hooper (BBC Sherlock), and for this year, Agent Scully (X-Files). Interestingly, both kids attended Gen Con in-utero. My first con experience was the same day I found out I was pregnant with my son Thomas, while my daughter Natalie was ultimately part of my Padmé getup. During that experience, a very convincing Han Solo sidled up to me and nonchalantly said, “Hey, I always wanted to meet my mother in-law,” complete with Harrison Ford’s voice. 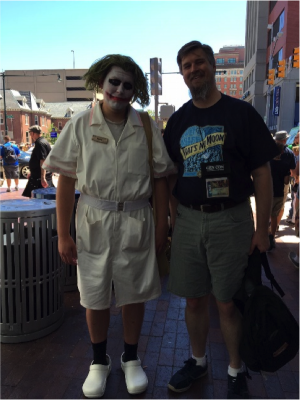 We knew convention life would be an experience we wanted to share with our children when they were old enough to tolerate and appreciate it. Last year’s family vacation consisted of a week in Indianapolis, the new home of Gen Con. My husband Andrew has worked for the convention itself over the past several years, and often assists with Trade Day, the professional arm of Gen Con. Andrew’s mother and I wanted to sit in on a few sessions of the Gen Con Writer’s Symposium, which runs concurrently at the same venue. Thomas and Natalie not only wanted to attend but also go in costume as Inklings from the Splatoon video game. They also assisted as co-presenters in my husband’s Trade Day session on MinecraftEDU for educators. The kids were totally in their element!

Planning for a con starts several months in advance. Registration for badges, events, and housing is first-come, first-served. If you plan to dress up, costumes and accessories must be ordered ahead of time because, trust me, some characters are in high demand and tend to run out online during con season. This kind of undertaking is not meant to be a snap decision unless you are local to the venue and don’t mind standing outside in line for up to several hours, depending on crowds and weather conditions.

Bringing children of any age, let alone those with a medical condition, requires careful consideration. Remember, you are going to a gathering of tens of thousands of your next best friends. In the event that anyone needs a breather, adult or child, plan to have enough adults on hand to accommodate that possibility. Last year, our hotel had a walkway that attached to the Indiana Convention Center, so hasty or meandering retreats were easy.

As a person on the shorter side of the vertical spectrum and a resident on the autism spectrum, I can tell you that the sights, sounds, and smells of attending such a convention may be overwhelming at times. While you will meet people of all ages, the main demographic is that of the male, somewhat unwashed, younger set. I am eyeball level to countless armpits, so there are so many instances of, “My, what an incredible smell you’ve discovered!” along the way. 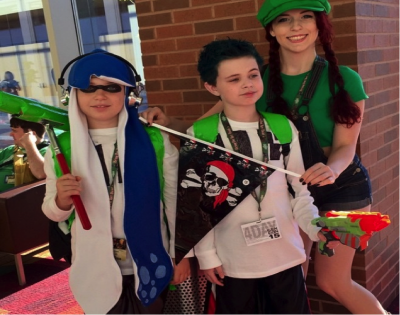 Plan ahead for mealtimes as the lunch and dinner rush are often fraught with unsuspecting minimum wage workers and exhausting lines. If you need to pack a snack, do it ahead of time, rather than be caught in a sugar or protein deficit. Additionally, bring extra supplies with you in case of immediate snafus, such as enteral pump bag leaks, Epi Pen emergencies, or an extra change of clothes. (Trust me, no one will know.)

The kids were so enthusiastic about their costumes that we did a dry run of their makeup and accessories a couple of days before our trip. Natalie decided to go with black eye paint for her costume, while Thomas chose to forego that (because of sensory defensiveness) and preferred to dye his hair blue. The reason is twofold. First, we wanted to know if allergies would be a concern. Considering both have an extensive history, you never know what they might react to. Fortunately, we had nothing to worry about on that end. Secondly, we wanted to know if they would tolerate their costumes altogether.

In hindsight, this test wasn’t met until the afternoon of their first day of actual cosplay. Thomas tolerated everything well, but Natalie became agitated as the day wore on. She figured that her headgear and makeup was a little too much and she chose to spend the rest of the convention in her everyday clothing – which is totally okay! The officials at Gen Con were impressed enough with their outfits that our kids became official Scavenger Hunt items for the attendees to check off their list.

We had the delight of witnessing someone dressed as Emperor Palpatine (Star Wars) drifting across the hallway as if he were using the Force. In reality, he employed a Segway underneath his cloak. It was a majestic demonstration of possibilities to behold! My son Thomas has a feeding tube, so we needed to figure out a way to accommodate nutrition with his costume. No problem! As an Inkling, he needs his “ink pack,” which is actually his enteral feeding kit. We consulted the graphics on the videogame and added neon green duct tape to complete the look. 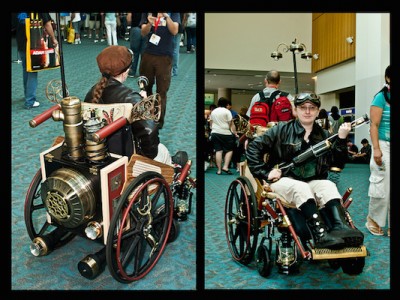 In passing, I have witnessed Darth Vader costumes for attendees with tracheotomies and reclined mobility units. Wheelchairs, however, have endless possibilities. If Steampunk or certain fandom vehicles strike your fancy, go with it!

We have our calendar cleared, registration, badges, hotel, and dog sitter reserved for Gen Con 2016. Natalie already has her costume for Rey (Star Wars), I’m going as Agent Scully (X-Files), and Thomas will go as Sans from the videogame Undertale. Goodness knows if Andrew will be able to hang out with author R.A. Salvatore once again. Maybe my mother-in-law and I will be able to glean new tips and tricks for writing along the way.

Above all, our family plans to have an absolute blast and further perfect the process!

Jennifer Peterson is an at-home parent who reentered the workforce on her own terms as the owner of Peterson Transcription & Editing Services, LLC. She uses her experience as a former paralegal and special education advocate to ensure the medical and educational needs of her children. Each child is medically complex with diagnoses spanning multiple food allergies, Eosinophilic Disease, Mitochondrial Disease, Generalized Anxiety Disorder, and High-functioning Autism. Despite everything, Thomas and Natalie have infectious smiles and curious natures. Her family thrives by relying on resources, tricks of the trade, gratitude for lessons learned, and an offbeat sense of humor.