I have wonderful memories of playing during my childhood. It seemed that the block where I lived always had more than enough kids who were outside playing hide and seek, soccer, running bases, riding bikes, roller skating and running through sprinklers. Inside, there were games, toys, and pretend play. The days were filled with activity of our own making. My husband grew up playing Little League and soccer. He is a sports fanatic and he “loves the game.” I know he had dreams of teaching our son to play sports, watching him play on teams, and coaching. 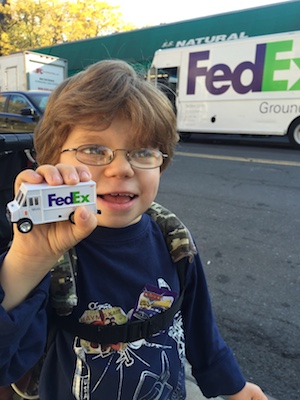 Although you know that your children are going to have a different childhood experience, you want to impart the best of your childhood to theirs. Play is a big part of that experience. However, there are so many ways in which play doesn’t mean the same thing with a child who has special needs. Over the years, I have had to emotionally let go of so many expectations, and play was just another thing to add to that list.

Lucas was diagnosed with Koolen-de Vries Syndrome at 20 months old. It was very clear at that point that he had global developmental delays. His fine motor skills were (and still are) a real challenge. He was non-verbal until he was nearly six. He struggles with sensory issues and shies away from typical children and new places.

Early on, I got every toy that therapists and teachers recommended. I urged him to play with blocks, balls and string beads. So many of the toys we had were designed to improve skills. But, it was clear that he wasn’t very interested. He liked to dump the blocks or beads out on to the floor. He liked to put them back in the container. He wasn’t going to do that puzzle or try to color with me. 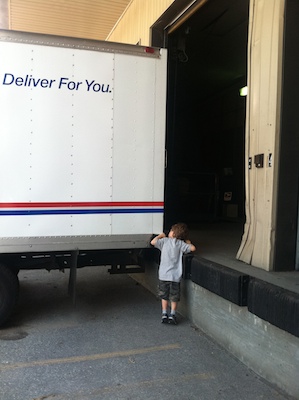 Play had been taken over by therapy. Every therapist walking in the door had a toy for him to manipulate. He started early intervention when he was seven months old and maxed out at 15 therapy sessions across six therapists before going to preschool.

Play was work for him.

I didn’t realize that right away. I continued to lug out the Play-Doh and try to engage Lucas in playing with his toys appropriately. I longed for him to enjoy being around other kids. At the park, all he wanted to do was swing. He ran away from other children who tried to play with him or talk to him. I slowly gave up trying to get him to go on slides or even go near the jungle gyms. Holidays and birthdays meant returning the toys given by well-meaning relatives, or struggling to come up with a list of toys he might like when he still hadn’t played with the toys from the last year or two. I ended up donating barely used toys to our hospital’s Child Life and his special needs preschool.

Sensory issues made a lot of activities challenging. After years of belonging to the zoo and having Lucas get upset or melting down nearly every time we went, we dropped our membership. We stopped trying to go to aquariums and birthday parties, which made for sensory overload. He refused costumes for Halloween and trick or treating once he could communicate.

Each of these deviations from my “typical” childhood caused a little more heartbreak in my mommy heart.

But, Lucas did have things he enjoyed doing. What he wanted to do most was watch traffic. Not able to do the ASL sign for buses, he made up his own. He could sit at the bus stop for hours watching the buses pull up. He loves doors that open and close. I made friends with the bus manager at a busy bus stop. Passersby smiled at his excitement watching the buses. Lucas was in his element. 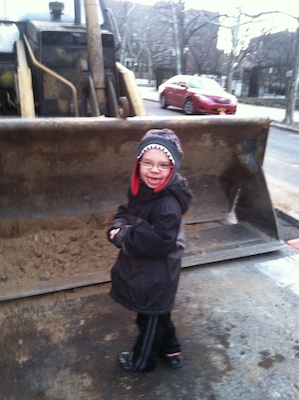 His love of buses grew to trucks. We sought out construction sites to watch excavators, backhoe loaders, and cranes. Delivery trucks are plentiful in the city, and a truck that is being unloaded to a hand truck is very exciting. Then came the elevators. Elevator doors open and close and they are much more frequent than waiting for a bus. A new shopping center provided an opportunity to see escalators and elevators together.

As time went on, therapy toys were replaced by trucks. Slowly, he started to move the trucks around. One day, when he was six, I noticed that the tow truck was attached to another truck. Then the trucks lined up in a parking lot, suspiciously like the parking lot at the post office. It wasn’t the pretend play I expected, but it was pretend play.

Somewhere I let go of what I expected his childhood to be. I used to feel so guilty and sad that he was missing out on the things I had enjoyed. But, then I realized that he was enjoying his childhood in a different way. He had things he loved to do, and I just had to embrace doing them with him. We ride the bus for fun. We go into Manhattan to ride elevators and watch trucks, not to see a show. I take the highways that have the most trucks on them despite the fact there is always more traffic. We walk around town looking for delivery trucks that are loading or unloading. We talk about the trucks we are going to see and what they are doing. We rarely leave home without a toy truck in hand.

His childhood is his alone and he is enjoying it on his terms. My preconceived notions of what play and childhood games are really don’t apply. But, that is OK.

Traci Nagy is mom to Lucas, 8, who has Koolen-de Vries Syndrome. She is also the founder of the Feeding Tube Awareness Foundation.