Life after the Trach: Not So Simple 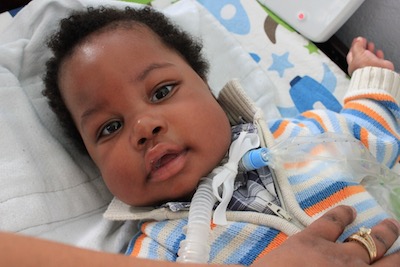 At two months old, my son Richie received his trach, and he was ventilator dependent until he was 18 months old. Gradually, he was able to tolerate a speaking valve and capping, all working toward decannulation. It seemed to us that things would be easier once he no longer had a trach, but it isn’t quite that simple. Richie was decannulated last spring at the age of three, and now, a year later, we can reflect on the challenges of this new part of his journey.

Facing the world without a trach has been a little scarier in some ways. We no longer have to worry about mucus plugs and emergency trach changes, but because Richie has a neuromuscular condition, respiratory concerns will always be a factor in his care. Weak muscles mean that Richie has a weak cough, making him prone to congestion and pneumonia. We still have suction, nebulizer treatments, an ambu bag, and oxygen supplies, and we have replaced the trach with new equipment to manage Richie’s respiratory status: a cough assist machine, and an airway clearance vest. His pulmonologist is also considering adding a CPAP or BiPAP machine to his respiratory routine.

Prior to decannulation, we had managed to keep Richie well and out of the hospital. In fact, the entire time he had the trach, he had no unplanned hospitalizations, a fact that gave us a sense of pride and accomplishment. That streak ended soon after decannulation. During his first autumn and winter without a trach, Richie was hospitalized three times for respiratory issues including pneumonia, RSV, and bronchiolitis.

We are learning that we have to be proactive about maintaining Richie’s respiratory health in the absence of a trach. At the first sign of a cold, we increase the frequency of his respiratory treatments and adjust his nebulizer medications. We remain aggressive until all signs of illness are gone. We can’t take for granted a little sniffle, because it can morph quickly into an illness that is beyond our control. With treatments every two to three hours around the clock when Richie is ill, his respiratory status can be effortful to maintain. But this is the new post-trach terrain: still complex but in a different way. 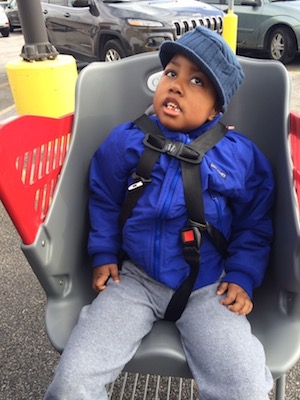 Looking back, I have a great appreciation for the trach as a medical innovation and a life saver. It gave our tiny, fragile son a chance. At the same time, it had an impact on other areas of our lives. The challenges created by the trach, most of which will affect Richie for years to come, are our new reality.

Richie still has oral aversions and does not chew effectively. He avoids food textures that are crunchy or novel, and he is reluctant to try new foods; for that reason, he still relies heavily on his G-tube. His sensory issues extend beyond eating as well.

Most noticeable are his speech delays, largely the result of not having been able to make sounds at all until he was nearly two years old. He uses a communication device now to help him communicate more effectively. Life after the trach consists of trying to reduce deficits that were created by the trach experience and keep Richie moving toward his highest potential.

Even though the trach experience was initially undesirable, we learned so much from it. Having a child with a trach taught us how to be disciplined, meticulous, and organized in managing his care. We learned to manage a staff of home nurses and to be alert for small changes in Richie’s health. Being trach parents, in essence, taught us to be more attentive and goal-oriented parents. It was truly a mixed bag.

We continue to fight Richie’s respiratory challenges one illness at a time, always grateful for the trach journey and hopeful that we won’t have to revisit it.

Charisse Montgomery, author of Home Care CEO: A Parent’s Guide to Managing In-Home Pediatric Nursing, is a professional writer, editor, wife and disabilities advocate, in addition to her most important role as mama to Richie. Having lost her sister to fiber-type disproportion myopathy in 2012, she advocates on behalf of her son and in memory of her sister. She has a bachelor’s degree in English from Towson University and master’s degrees in English and Educational Psychology from The University of Toledo, with research focused on empowering parents with medically disabled children.

She recently completed a graduate certificate in Patient Advocacy, and she serves on the Patient and Family Advisory Council for Rainbow Babies & Children’s Hospital. She can be reached at @madvocator on Twitter, Facebook, and Pinterest or through her personal blog site, madvocator.com.