Seizures During Sleep:
One Boy’s Journey with CSWS Epilepsy

Hello, meet my son Joshua! He is six years old, and he has a rare epilepsy known as Continuous Spikes and Waves of Slow Wave Sleep Syndrome (CSWS). This syndrome is commonly referred to as Electrical Status Epilepticus During Sleep (ESES). It appears to be quite rare comprising of less than 1% of all childhood epilepsies. The exact number of cases is unknown; however, it is believed that there are less than 1000 documented cases worldwide. 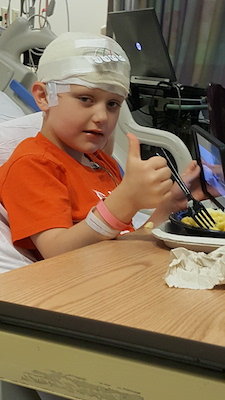 When your child is diagnosed with this condition, the journey can prove to be quite confusing. This is because not much is known about the condition and the terms or abbreviations—CSWS, ESES, and Landau Kleffner Syndrome (LKS)—are often used interchangeably. It is my understanding that ESES refers to the unique EEG pattern of near continuous slow spike and wave activity on the EEG which occupies a significant portion of non-rapid eye movement sleep (NREM). What is considered “significant” is debatable, and some authors suggest thresholds range from 25% to 85%. CSWS refers to the epileptic encephalopathy associated with global regression. LKS refers to the epileptic encephalopathy consisting primarily of language regression. The focus of this discussion will be on CSWS, a severe epileptic encephalopathy with: 1) seizures (but not always); 2) regression in at least two domains of development; and 3) ESES on the EEG.

I am Joshua’s mother. I am writing this in my personal capacity as Joshua’s mother, and not in affiliation with any organization. I am not a medical professional nor do I have any medical training. I am just a mother sharing one boy’s journey. Joshua was born in 2010, a happy and healthy boy. Joshua’s first seizure occurred at the age of 10 weeks. The doctors told us his first seizure was most likely an isolated incident and was not likely to occur again. The CT, EEG, spinal tap, and blood tests all returned normal.

By the age of two, Joshua had grown into a loving and sweet little boy who loved books, trains, puzzles, and playing with his older siblings. He was highly intelligent; speaking in clear, four-word sentences and mastering all his developmental milestones. He was naturally curious about the world around him and loved to learn more than anything. A few months later, he began having very brief staring spells.

At the age of four, Joshua began to decline in his social skills, becoming more anxious, withdrawn, and easily angered. He began misbehaving in school and exhibiting signs of autism. He also developed a fluctuating stutter and had difficulty finding words to express himself. He often refused to answer when we spoke to him, and he became increasingly uncooperative. His primary physician was concerned about his behavior so he referred Joshua to a local developmental pediatrician.

During our first visit, she witnessed a very brief staring spell. She immediately ordered an EEG, which revealed results consistent with Benign Rolandic Epilepsy (BRE), and Joshua was referred for a neurological evaluation. At this first visit, the local neurologist told us that Josh had about only a 40% chance of having a second seizure, it is possible that he would never have one at all, and not to worry.

Soon thereafter when Joshua turned five, his staring spells became longer and more frequent. He also began having facial twitches and became increasingly clumsy. His behavior became impulsive and unpredictable such that it was difficult for him to remain in school.

Thus, a second EEG was performed, but this time Joshua fell asleep. From the very onset of sleep, the EEG revealed very frequent discharges occupying a significant portion of non-REM sleep; however, not quite meeting the diagnostic repetitive requirement of ESES. I asked our then neurologist, what is ESES and why is it mentioned in Joshua’s report? I was told not to worry, that Joshua had a benign epilepsy and most children outgrow the condition by the time they reach puberty.

His explanation seemed simple and I am sure was intended to be comforting, yet I still had many unanswered questions.

If Joshua had ESES, what would that mean for his future? To find answers to these questions, I began searching the internet and reading every PubMed article I could find on the subject. During my search, I learned that ESES impacts school aged children usually between the ages of four and nine, although some earlier cases have been reported. Many of these children are seizing almost continuously while they are asleep, yet the seizures are not always visible to the naked eye. This is known as subclinical seizure activity. If untreated, these children may slowly lose the ability to speak, understand language, and regress in other areas of development such as motor skills and intelligence. They may have difficulties with attention, learning, and processing of memories. The symptoms can be subtle and developmental delay may be the only sign that epilepsy is present in some children. 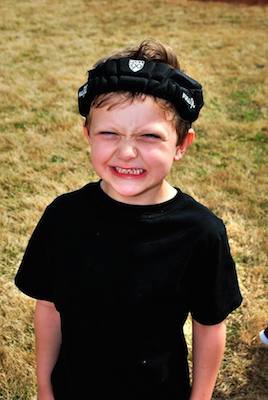 Behavioral regression is the most striking feature of this syndrome, and autism-like symptoms can occur. These children may also be diagnosed with ASD, ADHD, and behavioral disorders; however, it is the underlying epilepsy that is most likely responsible for their unique behavior profile. Technically, ESES is considered a benign epilepsy, in that the seizures almost always resolve by the time the child reaches puberty. However, the damage done to the child’s development and the resulting neuropsychiatric deficits are often permanent. Early detection and treatment is thought to be critical to preserving the neuropsychological development of these rare children. I feel it is important to note that some children never have a clinical (visible) seizure. Consequently, this epilepsy can easily be overlooked and remain undiagnosed for years; resulting in potentially irreversible damage to the child’s development.

After learning this information, we were determined to find out whether Joshua was in the early stages of this disease, and if so, to get him the early intervention treatment that was so highly recommended in the literature. During my search for an ESES expert, I stumbled across an article in the Boston Globe called, Taking back the night in epilepsy. This was a story about a little boy named Ian with ESES, who was a patient at Boston’s Children’s Hospital (BCH) and was helped by a clinical researcher on this very subject. After reading this article, we decided to seek a second opinion with specialists who were experts in this area.

However, prior to our first appointment, I awoke at 4:15 a.m. one morning to find Joshua amidst a convulsive seizure involving the left side of his body. Our local hospital admitted him for a five-day EEG study. The EEG data once again showed the peculiar EEG pattern generally associated with ESES. The on-call neurologist tried to offer some encouraging words, but her facial expression as she looked at the EEG data told us she had some concerns. She used expressions like, “Well, not a lot is known about this phenomenon,” and, “We are not sure what this means for Joshua.” She discharged him with a prescription of Trileptal and encouraged us to pursue a neuropsychological evaluation and a second opinion. After starting Trileptal, Joshua’s seizure activity increased and he developed a chronic-vocal-motor tic disorder. He was then placed on Keppra which made the behavior problems worse and did very little to control the seizures or the tic disorder.

When we arrived at the hospital for our first appointment, it was apparent that the neurologist had spent much time reviewing the voluminous amount of records, EEG data, and MRI images we had sent him earlier. After carefully reviewing Joshua’s EEG data and medical history, Joshua was diagnosed with CSWS Epilepsy Syndrome. We also learned that Joshua not only had ESES on his EEG, but that Joshua had near continuous spike and slow wave activity 85% of the time he was asleep every night for the entire five days he was in the hospital. It was this intense subclinical seizure activity that was responsible for the seizures, behavioral problems, and developmental issues we were seeing in Joshua.

It was recommended that Joshua receive both speech and occupational therapy. It was further recommended that we purchase seizure detection monitors and an anti-suffocation pillow to keep Joshua safe during the night.

As one can imagine, we were devastated by Joshua’s diagnosis. We were horrified that the seizures occurred during the night while we slept, and we were concerned not knowing what the future holds for him. Yet, we took comfort in knowing that he is getting the finest medical care available to him. We also found comfort in the several CSWS, ESES, and Landau Kleffner parent support groups on Facebook.

Joshua is currently being treated with a gentle dose of Onfi (Clobazam) at bedtime. Within a few months of starting his new medication regimen, the ESES pattern on the EEG disappeared, Joshua’s speech improved, he began experiencing an explosion of learning, and the autism-like symptoms resolved. He has less seizures and his behavior has improved dramatically. He is currently doing well in a mainstream classroom with the assistance of a personal aide.

We believe that awareness is the first step toward advancing research into this disease, and without research, a cure is not likely to be found. Therefore, we highly encourage other parents to do what they can to raise awareness in their own communities. Some parents have asked me, “why is it so important to share your boy’s story?” The answer is simple. I firmly believe that when we share our stories, we can improve and even save lives. It did in our case!

Vinez Campbell is mom to Joshua (age 6), and has three grown children Rachel, Christopher, and Lisa. She has five grandchildren. She resides in Williamsburg, Virginia with her husband Tom and son Joshua. With training in Law and Sociology, but none in medicine, she recommends consulting with a pediatric neurologist whenever developmental delay or symptoms of autism are present even in the absence of visible seizures. Keep in mind that an overnight sleep EEG may be required to detect the presence of ESES.