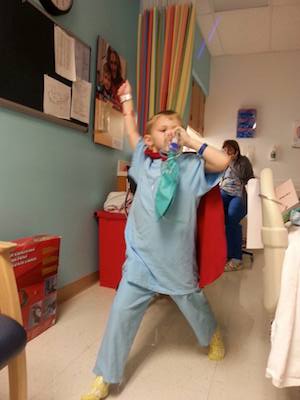 According to The International Foundation for Functional Gastrointestinal Disorders, Dyssynergic Defecation is an evacuation disorder or condition in which there is a complication with the way muscles and nerves work together and function within the pelvic floor, many times causing the person to have problems with chronic constipation. It is unknown specifically what causes dyssynergic defecation, as it can be different for each patient. Frequently, the complication can be due to the lack of coordination of the muscles of the abdomen and pelvic floor to evacuate stool. It can also be due to paradoxical contraction or non-relaxing anal muscles during defecation. In many patients, there is also a decrease in the sensation within the rectum causing the patient to not know when the rectum is becoming full of stool and needs to be evacuated.

Our son, Weston, has multiple Functional GI and Motility Disorders, one of which is Dyssynergic Defecation. Weston is six years old and has had multiple GI issues since he was born in 2010. In 2016, he was diagnosed with Dyssynergic Defecation after having an Anorectal Manometry test twice at a Motility Center in Ohio. The recommendation for treatment specifically for Dyssynergic Defecation is for Weston to do Intrasphincteric Botox Injections and to start Physical and Behavioral Therapy that would consist of Biofeedback Therapy three times a week. We also do other treatments, regimens, and therapies, but those are for his other motility disorders.

We came back home to Michigan and found a Physical Therapist who could do Biofeedback Therapy with pediatric patients. The PT observed Weston on our first visit and started his biofeedback training sessions. We also began the Intrasphincteric Botox Injections while still maintaining his other therapies and oral medicine regimen. We have videotaped some of his Biofeedback Therapy sessions so that other people can see how easy it is and what it’s like. This link will take you to a video of one of his Biofeedback therapy sessions.

When we started the biofeedback therapy he was doing sessions three times a week for the first two months. Each session takes approximately 20 minutes to complete. We were also encouraged to do these same rectal exercises at home two to three times a day. He can do the exercises while laying down or while sitting on the toilet. Because our insurance only covers 32 Physical Therapy visits per year, we slowly went down to two biofeedback therapy sessions over the last four months, and are now down to one time a week.

Biofeedback therapy and training has helped Weston tremendously. It has made a huge difference! It assists him in being able to feel what his rectal muscles are doing and shows him and us visually on a computer screen what he is doing when he relaxes and contracts his rectal muscles. It has strongly reinforced to him how to properly use his abdominal and rectal muscles when he is attempting to defecate. 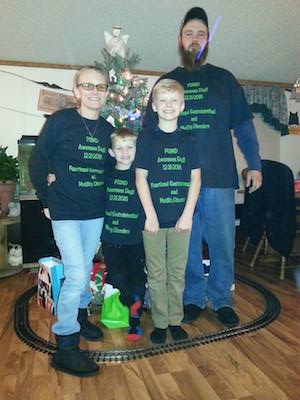 Biofeedback therapy/training is a form of Physical and Behavioral Therapy. According to the Herman and Wallace Pelvic Rehabilitation Institute,

Biofeedback Therapy is a non-invasive technique that allows patients to adjust muscle function, strength, and behaviors to improve pelvic floor function. The small electrical signal (EMG) provides information about an unconscious process and is presented visually on a computer screen, giving the patient immediate knowledge of muscle function, enabling the patient to learn how to alter the physiological process through verbal and visual cues.

Biofeedback Therapy provides real time visual and sometimes audio feedback of the rectal muscles. Sometimes a probe is inserted; however, this is used more for adult patients. For pediatric patients like Weston, we apply two sticky electro pads to his rectum, one on each side, along with one electro sticky pad on his butt cheek. The electro pads are then connected to wires that are connected to the biofeedback machine and a laptop computer.

As reported by the Herman and Wallace Pelvic Rehabilitation Institute,

Each Biofeedback therapy session can vary on timing from about 20 minutes to an hour depending on the patient. Biofeedback treatment is basically a way to provide the patient with the information necessary to retrain and change muscle behaviors of the rectum from tightening to relaxing during the defecation process. It also helps to retrain, teach, and reaffirm to the patient which muscles to use and not to use when trying to relax or contract to successfully retrain the muscles how to function properly together to have sufficient bowel movements.

Caroline, who goes by Carrie, is married to an amazing man and daddy—Jordan Meckstroth. They have two of the most handsome boys on the planet: Braxton (13 years old) and Weston (6 years old), and baby girl Remington Sue born still on 1-12-10, who was just too beautiful for earth.

Caroline has a BA in Communication, a Master’s Certificate in Nonprofit Management and another Master’s Certificate in Public Management. She is an advocate for Functional Gastrointestinal and Motility Disorders. She started the group Weston’s World (FGIMD—Functional GI & Motility Disorders) on Facebook in March 2016 to give updates on her youngest son Weston, who has Functional GI disorders and multiple Motility Disorders, to advocate and raise awareness for FGIMDs, and to find other families struggling with the same or similar FGIMDs. Her main goal is to spread awareness for FGIMDs so that more little ones can get the proper care, testing, and diagnosis in a timely manner!!

Weston has had GI issues since he was born in December of 2010, such as Vomiting, Diarrhea, Malabsorption, Failure to Thrive, Acid Reflux, GERD, and Chronic Constipation. Weston has been diagnosed with a Functional Gastrointestinal Motility Disorder, referred to as Chronic Constipation due to Slow Colonic Transit or Colonic Dysmotility, as well as Rectal Dysmotility or Dyssynergic Defecation. This means that his body cannot physically eliminate waste without assistance.