When our second daughter, Kelsey, was born, our hearts became fuller than we ever thought possible. Our little family with two sweet, beautiful daughters was a dream come true. I should know, because I am kind of obsessed with dreaming big. I’m a financial advisor and success coach, so my wheelhouse is all about thinking positive and goal setting. We’d experienced some tough trials in life, but despite this, we felt like we had accomplished everything we wanted. I wanted others to feel the same fulfillment, and I loved showing them how. 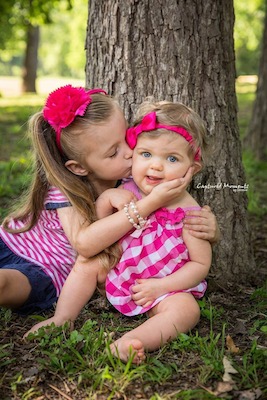 Then our toughest trial began.

I truly wish I could go back to that more carefree, confident, and naïve time. I had greater health, positivity, and energy then.

Our firstborn, Lexi, was a very active child. She still rarely sits still and has been a great communicator since earlier than average. So, when our second daughter, Kelsey, was born, we definitely noticed she was more laid back. We could see the stereotypical first and second child characteristics playing out. Lexi was independent and active. Kelsey already expressed an easygoing attitude and was in no hurry to reach milestones. Luckily, they were both good sleepers and happy girls.

The difference became a greater concern when at 10 months, Kelsey wasn’t yet crawling and she lacked stability when sitting, among a few other minor curiosities. We started to run a few tests, all of which came back negative, and we put her in physical therapy really believing she would just need a little assistance to catch up. I had some worries—no doubt—but I was in the habit of not spending too much time on negative thoughts.

The absolute scariest night of our life was just four days after Kelsey’s first birthday. I heard a clicking noise coming from the baby monitor and almost dismissed it because I was starting to wean off of the monitor. I’m so glad I was up later than usual reading and that something wouldn’t let me ignore it, because when I glanced at the monitor to visually check on her, I could see her face down and rhythmically shaking. She looked flat. It looked so wrong.

I have never felt a more certain and immediate intense fear. I think I gasped and felt like I couldn’t bolt fast enough to her room. My husband Rocky asked what was wrong and luckily didn’t wait on my response as he ran behind me. I picked her limp pale body out of a puddle of fluids in her crib. She was still aspirating, barely breathing if at all. I cried out asking what was wrong with her and what to do. There are no words to describe the intense helplessness and terror of witnessing your child dying. We both dropped to our knees in weakness to the floor. Rocky took her from me, and as I prayed over her, he cleared her airway. She took one desperate gasp and then let out the loudest scream as she woke up. Her color came back and the blueness from her lips started to get a little better.

We cried happily but still in hysterics. We then scrambled and stumbled in the night to grab Lexi out of her sleep, the diaper bag, my purse, and drove to the ER. They transferred Kelsey by ambulance to a major children’s hospital two hours away as Rocky followed behind us.

I really can’t remember what I thought must have been wrong with her, but after they ran a battery of tests, they came in with diagnoses of brain abnormalities in her temporal lobes and corpus callosum. They said that cells migrated to the wrong place somewhere around the fifth month of pregnancy, and described what that might mean for her life with seizures and delays. I wondered if it was my fault and ran through every possibility from a fall onto her head she had around 6 months old to the flu shot I had during my pregnancy. They assured me none of these could have caused this, and offered that an infection was more likely the culprit despite all of those tests later coming back negative.

Well, confusion, denial, devastation, utter sadness, and grief don’t seem to accurately sum up our feelings in that moment we learned her diagnosis. We both broke down and sobbed so deeply to the core as soon as the doctors left the room. We didn’t call anyone for a while until we were numb. I think we’re still coming out of that numbness eight months later. 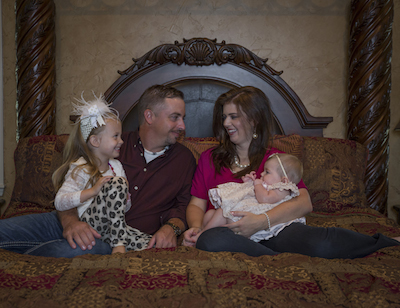 I thought I knew emotions prior to that day. I thought I understood what special needs meant—I mean, I knew other families on that journey. It’s the same way I thought my heart couldn’t get any fuller than it was after the birth of our firstborn. I was wrong, so incredibly wrong. I had no clue how much your heart could love. I had no idea what it felt like to love even more.

I had no clue how much your heart hurts when you learn your child isn’t well—permanently not well. I had no idea there would probably be millions of moments that remind you of that pain.

My go-to negative emotion has never been anger as a first resort—it’s usually sadness or fear. I’ve heard it takes more energy to be angry, and that anger is fear turned outward, while depression is fear turned inward. Although I can relate, I honestly don’t have enough energy to get mad when someone says or does something disrespectful to the special needs community, my child, myself, or otherwise. It’s rare and would take a lot for me to get angry. It’s also now less likely because I haven’t slept the same since that day despite three monitors in Kelsey’s room.

I just get sad when I’m hurt. I usually, and thankfully, get over it pretty quickly, too. I’d be in a depression if it weren’t for my training—it, along with an amazing support system, has been my lifesaver. We’re starting to gain control again and choosing to design our happiness. I am hopeful our growth from this will lend itself to an even more beautiful life.

I am still innately a positive person. I also believe in the power of being positive and have a strong faith that certainly helps, too. But when my daughter becomes inconsolable and has no words at 21 months old to express her feelings, I get sad. When I attend a birthday party and see children half her age walking, I get sad for Kelsey who isn’t walking yet and is overwhelmed by the commotion. I get sad when I think about releasing my complex and last baby from our care to a new two-day program to help her socialize and learn. I get sad when I see other children or adults with special needs that remind me of Kelsey.

I get sad a lot more than I did before that fateful day. I also get ashamed of being sad, when I have two living, breathing beautiful, mostly happy children. I get ashamed because I am supposed to be the one holding it together. I get ashamed because I didn’t view the special needs community with as much compassion as I do now. I’m ashamed I don’t usually feel like letting others in. I also never want to bring anyone else down, so I spare them.

Being a special needs parent can be a lonely place—as it is with any type of grief, I’m sure—well actually, I’m not sure, and I don’t want to be. I don’t wish any sort of trauma on anyone, but I will tell you, it has broken my full heart wide open. I’m not sure yet if that’s a good thing or not, but I will tell you my old mindset training has never been more useful or more real to me.

Focusing on the present is how I snap out of the sometimes-daily sadness. Thankfully, we have more reasons to be happy than sad, and that is our saving grace. I just look at my daughters’ smiles, breathe, and dig in to them. To stop my runaway thoughts at night, I pray with gratitude and envision a happy future. All I know how to do is this, and it helps.

Michele Rohde is a Victoria, Texas native, mother to two daughters, Lexi and Kelsey, and wife to her high school sweetheart Rocky. Together they own Rohde Financial Group of Ameriprise where they serve as Financial Advisors and Insurance Agents. They’ve won Best Financial Planners in their greater metro area for over five years. Michele co-authored the National Best Seller Women Who Mean Business and also serves as a certified transformational coach to motivated women all over the world. Michele’s passion is showing others how to achieve their dreams. She was excited to host her first VIP party for children with disabilities this year and hopes it becomes a positive and impactful event for the special needs community for years to come.