Living the Joy in the SLOS Journey

When my daughter Ilse was born, she was whisked away to the NICU after only a brief mommy cuddle. I was lying on the operating table and my arms were pretty numb, so I barely got to touch her when they laid her on my chest. I didn’t get to unwrap her and count her fingers and toes. 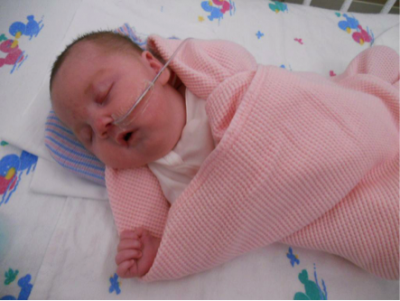 When the small town hospital I’d delivered at didn’t know what to do with a baby who couldn’t suck, whose blood sugar was up and down, and who was a floppy 34-week preemie, we made the decision to transfer her to a children’s hospital in a larger nearby town. I didn’t get to go with her and I still get teary thinking of the first night she spent there all alone.

Ilse didn’t learn to suck/swallow/breathe like preemies are supposed to. She didn’t gain weight and she didn’t learn to hold up her head. In addition, she threw up most of every feed even though it was given slowly through an NG-tube. My husband and I were cautioned against holding her while she was eating—or even shifting our position in the arm chair—because the medical professionals believed those things were causing her throwing up.

As we observed our daughter, we discovered cataracts, low energy, and very slight syndactyly (webbing) on the second and third toes of each foot. My husband consulted with my sister, whose daughter was born with all of those things, and he asked the doctors to test for a specific genetic syndrome. I felt so betrayed when I arrived at the hospital and a rude nurse reported to me, “Your husband thinks Ilse’s eyes look VERY funny.” I was angry that my husband could even intimate that anything was “wrong” with my precious child. 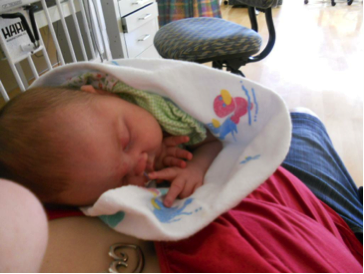 Two weeks later, though, I came face to face with the fact that there was something wrong. Ilse was diagnosed with Smith-Lemli-Opitz Syndrome (SLOS). SLOS is a metabolic disorder in which the DHCR7 gene is missing an important enzyme, the enzyme that finishes up the production of cholesterol. Cholesterol gets a bad rap, but it’s actually necessary for each cell in the body. Without enough cholesterol, the body can’t develop properly. Individuals with SLOS inherit the gene from both parents, and they have varying symptoms depending on the amount of cholesterol they can produce.¹ Ilse has microcephaly, syndactyly, droopy eyelids, sensitivity to the sun, immunodeficiency, feeding problems, elevated liver enzymes, intellectual disability, low muscle tone, cataracts, random fevers, Raynaud’s Phenomenon, disturbed sleep cycles, and poor growth. She’s non-verbal, doesn’t walk (yet!), is not potty-trained, is G-tube fed, and she burns so easily park outings last ten minutes or less. She also displays Autistic tendencies, as do between 71% and 86% of other kids with SLOS, according to a discouragingly named article written by researchers at the Oregon Health and Science University, a highly respected center for research into Smith-Lemli-Opitz Syndrome.²

Ilse is a happy girl. She babbles, giggles, plays, and she knows where her iPad is even if I move it around. Despite going through blood draws, pain, doctor appointments, six therapies a week and frustration at not being able to communicate, nothing stops her from delighting in the world around her. 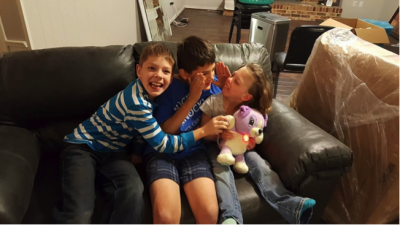 Last year was her first year at school. While some kids with SLOS are in general education classes, Ilse is in an Experiential Learning Classroom. She’s working on putting items into a container and waving when others greet her. Ilse will continue to learn. She’ll never be out of a self-contained classroom, but she will learn to walk and will hopefully learn to say a few more words. Right now she reliably says “yes.” It comes out as “Ah-yesh?” but she’s saying it! And her “peek-a-boo” and “thank you” make her brothers and me giggle uncontrollably. Right now one of Ilse’s favorite things to say is “oh ee oh ee oh ee.” We don’t know what it means, but she only says it when she’s happy.

This summer is the first summer Ilse has enjoyed the water! We bought a house with a pool (aquatic therapy, you know!) and she loves spinning in the water. She doesn’t recognize the danger that comes with a pool, so I don’t let go of her for a second, and I watch to make sure she doesn’t swallow or breathe in any water.

Ilse and I get ready together in the morning. We get dressed, we put on our makeup, and we do our hair. Momma takes a turn and then Ilse has a turn. She will stand with me if I let her look in the mirror and talk to her in a silly voice. We also sing our special song at bedtime, and she knows that at the end of the song we say, “Joy!” and tap her nose. She knows Joy is her middle name, and she knows that if we tap another part of her and say “Joy!” that it isn’t correct, she giggles and giggles until we tap her nose. 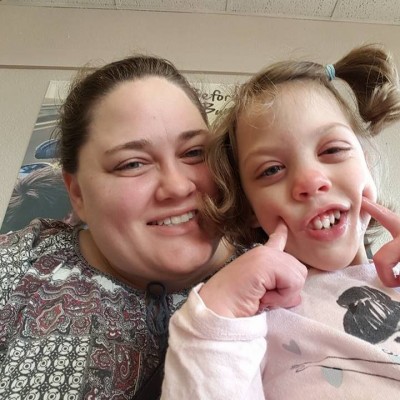 Ilse requires constant supervision. She loves the feeling of falling backwards because of the vestibular stimulation it gives her, but her lack of danger awareness makes her all the more unpredictable and keeps us on our toes. The constant monitoring can be draining, but the special moments interspersed throughout the day make it all worthwhile.

Ilse is one of six or seven kids with SLOS in Texas, but there are hundreds around the world. I love being able to message my fellow SLOS moms and get a realistic but hopeful idea of what Ilse’s future will look like. When she’s in her twenties or older and still living with us, she and I are going to get a fancy convertible and tool around town. I’m going to help her live a useful life, whether that’s a job she’s suited for, or just being a good example of happiness and perseverance to people who see her. We might spend our days visiting her brothers’ families and holding their babies, or shopping for or visiting shut-ins.

I’m not picky about what we do in years to come. Because I’m pretty sure I’ll hear “I love you” by then.

Emily is a busy wife and mom. Her three kids have varying levels of disabilities, from mental health, Oppositional Defiance Disorder, and PTSD to Smith-Lemli-Opitz Syndrome, and her husband has Cerebral Palsy. She has a passion for helping and loving other families on the special needs journey. She is on the board for JourneyFEST, a non-profit that is “Community for Special Needs Families,” and she enjoys reading, tv shows, and gazing at her children while she wonders why on earth she was blessed with such precious souls to love.