A Mother’s Open Letter to Pediatric Providers:
It is Never a Bad Idea to Make the Referral to Palliative Care

June had an undiagnosed neurologic disorder that began, for us, the morning after her birth when she failed the newborn hearing screening at the hospital. Infantile spasms started not long after, eventually numbering in the hundreds to thousands each day. As her issues compounded—cortical visual impairment, developmental delays, nephrotic syndrome, bowels that simply stopped working—we took June to one specialist after another, leaving with more questions than answers as to the underlying cause of her symptoms and with mere temporary solutions. We lived in a constant state of worry and unknowns about her health and future. 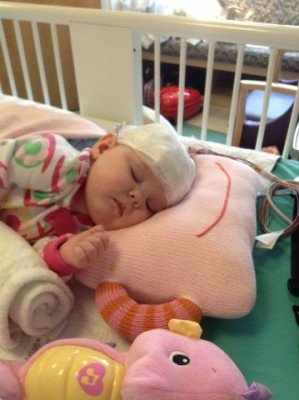 Desperate to find a cure, we turned to experimental therapies, even moving our family hundreds of miles from home…without success. June’s kidneys failed two months shy of her fourth birthday. She could no longer take in fluids without liquid pooling in her lungs. That’s when my husband and I decided to listen to June and what her body was telling us.

She was ready to die.

The thought that June wouldn’t live past childhood came to us late in her life. In hindsight, I think we would have benefited from clear, honest, and direct conversations from June’s physicians earlier on.

In total, June saw 20 specialists across four different hospitals in three different states. Despite all of these doctors, we didn’t learn about palliative care until a year before her death, and by pure luck—the hospital that performed June’s feeding tube surgery has a policy where the palliative care team follows all complex children that are admitted. I am so thankful for this policy. Individually, we had a fantastic relationship with nearly every one of June’s doctors. We trusted each of them, and I know they care deeply for their patients and their families. As a whole, however, I believe the system let us down by not introducing palliative care at the moment we were unable to control her infantile spasms. I believe it would have ushered us in to the next stage of her condition in a better way.

The palliative care team helps parents coordinate their child’s care when the growing number of specialists can quickly become overwhelming. I know June’s doctors communicated to one another in their notes, but to us each specialty felt separate from the other, and it seemed the care of June as a whole person was lacking. I felt tossed around to each specialist like a hot potato. I questioned if anyone was putting the pieces together.

I understand that coordination of care is an enormous problem in all areas of healthcare, and I don’t have a solution to propose. However, I think palliative care can aid families in this dilemma until we figure out how to resolve it. At the very least, palliative care providers can be the point person to parents desperate to make sense of all the different ailments and how they relate to their child.

Another vital role of palliative care for a family like ours is to educate parents on what they can expect in their child’s life and likely death. My husband and I hadn’t experienced chronic illness or death until it was happening to our first baby. While you—pediatric doctors, nurses, and healthcare professionals—see sickness and death more often than you’d like to talk about, many of your patients’ parents are facing it for the first time. June’s was a unique scenario and I appreciate that without a diagnosis, there was no way to tell how her condition would unfold.

We asked questions about what to expect for June’s life and most of what we heard was, “it’s unlikely,” “we don’t know,” “it’s hard to tell.” I would leave the conversations feeling defeated, but I still had a glimmer of hope in the doctors’ uncertainty. And hope is so important, I know that. But so, too, is acknowledging what might also happen. After June’s death, I thought about a few of the conversations, and it is now obvious to me that her doctors did not believe she would live a long, fulfilling life. They saw the imminent danger, and while no one ever misled us, I saw a crack of hope in their seeming uncertainty and took it as a large window.

In hindsight, I wish someone had been clear and upfront with us when we were unable to control her infantile spasms. This wouldn’t be an easy approach, I know. I would have been angry with you. I would have cried, maybe yelled, and probably stormed out. But as a mother on the other side of it now, I would much rather have known our likely fate and spent my energy proving you wrong. Even if I didn’t see it at the time, my anger would have been with the situation and not with you. I would have looked back on the conversation now and been grateful for it.

Pain Management and Quality of Life

Lastly, palliative care would have helped us manage June’s pain so much sooner. June suffered from the day she was born. In the first few weeks, she cried all the time. I remember telling the pediatrician at her one-month check up that it seemed like something was hurting her because she screamed so much. He brushed it off as colic, but when the spasms became obvious, her crying episodes made much more sense.

During our first encounter with the palliative care doctor, on the other hand, she noticed June would cry out in pain for no reason at all. I wanted to hug her as soon as she said something because that is what I had been saying for so long! And, guess what?! She had a medicine to help with that.

June’s palliative care doctor was a great support to us, and once we were set up with her, the last year of June’s life was mostly peaceful. Our appointments focused on June’s comfort and everyone’s quality of life. I used to be afraid to ask about June dying to other doctors because I thought they would think I wanted her to die. With our palliative care doctor, we could ask questions freely and openly. She was our lifeline, and I am so grateful to her.

Being June’s mom is both incredibly rewarding and exhausting—a physically and emotionally draining process. For parents like me, some of these hardships are out of our control and some are in our control. Making life easier for families like ours through palliative care is in our control. When you see the writing on the wall, don’t be afraid to recommend palliative care. It could be just the thing the family needs.

Author: Genny Jessee • Date: 2/13/2017 • This article first ran in the AAP’s Section on Hospice and Palliative Medicine December Newsletter and was also featured on CourageousParentsNetwork.org.

Genny Jessee is a writer, wife, and mother. She is a bereaved parent, patient and family advocate, and co-founder of the June Jessee Memorial Foundation, dedicated to the life and legacy of June in support of other brave children and families battling devastating neurologic and medically complex conditions.