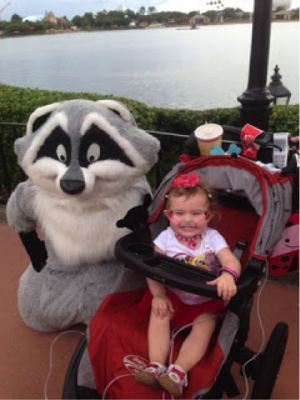 I’m writing this article because it is something I searched the Internet for before we went to Disney and struggled to find information. I wanted to share the things we learned along the way to help someone else planning a trip to Walt Disney World with a child who uses an oxygen concentrator.

5. Get as many batteries as you can

At home we use a large plug-in oxygen concentrator and small tanks when we go out of the house. Since you cannot fly with tanks, we rented a portable oxygen concentrator from our durable medical equipment provider. While it is smaller than what sits in our living room, it weights more then my 2 1/2 year old and was the same size as the basket on our Baby Jogger Summit stroller. We had never used a portable unit before, as this was our first trip with oxygen.

Our supplier only gave us two batteries that stayed in the unit. They supposedly last 5.75 hours on my child’s rate; however, they never lasted that long. An extra battery would have been very helpful at times, and would have made us have to find a place to charge less often. There were times where what we could do next revolved around plugging in to charge for a while. I would recommend seeing how many batteries your supplier will let you borrow with the concentrator and take as many as you can.

4. Stroller as a wheelchair

My little one is 2 1/2 and is on oxygen and a feeding pump most of the day. She also has low muscle tone and can only walk for short distances. If she walks too much it takes too much energy from her that is required for her other organs to function. She will need a wheelchair as she gets older so that she can fully participate in things without it being too much work on her body. However, at 2 1/2 her stroller works just fine for getting around, which is why we invested a year ago in a nice stroller, as it gets a lot of use. Carrying her, her feeding pump, medical supplies, and a 20-some pound oxygen concentrator through all the lines would have made it so we could not have done as many things as we did. 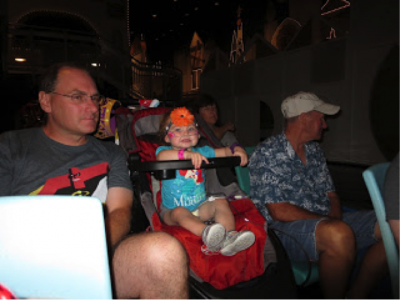 Having her stroller tagged as a wheelchair was a lifesaver for us and made it so we could enjoy Disney. We only came across one other guest who was not kind about us being let in with a stroller when she was being told to park hers. In our case, getting the tag was rather easy. We went to guest relations and said that we needed it and then the cast member looked at Jillian and went and got it. I know other people have said they needed to explain why they needed it, and that is so that people don’t abuse the system, and ruin it for those of us who really need it.

We did not get a Disability Access Card (DAS) because we did not feel like Jillian’s needs required it. As long as she could be in her stroller while we were in line, we did not need more accommodations. That is who we are, and we will use as few accommodations as necessary to participate in a situation so accommodations will be there for others who truly need them, and there for us in the future in case we really need them.

When you need to plug in every few hours, you end up spending a lot of time looking for outlets. There are some of your typical charging areas (Rapunzel bathrooms in the stumps) but those are outside in the heat. Most of the time when we needed to charge we wanted to charge while we ate, so we were not just sitting around doing nothing and wasting precious Disney time. Restaurants do not have a lot of outlets in them, and sometimes they were located in really odd places; however, the cast members that are cleaning in the restaurants know where they are located because they use them for cleaning. We learned that they were more than helpful once we let them know it was oxygen we were charging and not a cell phone. 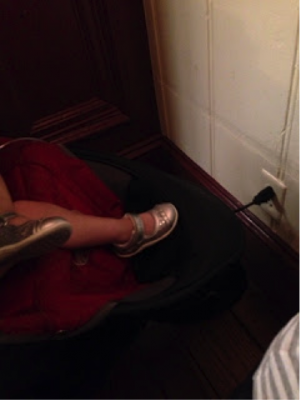 2. You will still be able to do most things

Any ride my two year old wanted to do and was big enough to do (she really wanted to ride Big Thunder Mountain but is many years away from being tall enough) she was able to ride. Sometimes we needed to get a little creative, and sometimes cast members worked with us to come up with the best way for her to ride, but we were able to make it work. For most rides we did not transfer Jillian out of her stroller; if it was a ride she could stay in her stroller then she stayed in. Her oxygen was hard to get out from under her stroller and more secure in the stroller than sitting out on a ride. With her low tone she also does not sit up nicely for long amounts of time, so it is better for her to be in her stroller where she is best supported.

We did not find that her oxygen kept us from doing anything she wanted to do. She is also only two, so there are rides she did not go on. I am not sure how those work with oxygen, but maybe someday down the line we will figure that out. The great thing about Disney is that most rides are meant to be enjoyed as a family, so a two-year-old can go on most things.

Chances are that if you are taking a child on oxygen to Disney that your life is rather full of doctors and therapists and all sorts of other medical things. While you still have to tend to your child’s everyday medical needs while at Disney, it seams a little less “medical” doing it at Disney. Enjoy the time there; it is truly a magical place. Use it as a time to recharge yourself, too, so you can go back home and jump back into the craziness of raising a child with medical needs. I have a child who is happy during most things (including GJ-tube change-outs!), but there is nothing quite like the joy on her face while we were at Disney. That was priceless!

Attractions she went on in each park

Amanda is married to Brent and has two children, Jillian and Lydia. They are both still considered undiagnosed although it is thought that there is an underlying muscle issue with a maternal genetic inheritance as Amanda has many similar symptoms, just not as severe as the girls. They both have GJ-tubes and Jillian is on oxygen and has leg braces. They are the happiest kids, and they both love making people at our local children’s hospital smile. Jillian’s favorite things revolve around pink, purple, glitter, and tutus, and she is ok with all the medical stuff as long as she can make it girly. Lydia loves smiling and cuddling. They are a big Disney family and planning trips to the parks is their stress relief.

Amanda has a degree in early childhood education in both regular and special ed and taught 4K until Jillian was two years old, when she became a stay-at-home mom to help protect Jillian’s lungs from germs. They rely on their faith, friends, and family to get them through the hard aspects of being a medically complex family. Her blog can be found at brownandpinkpolkadots.blogspot.com.