When I walk into one of my son’s many doctor’s appointments, which sadly have been monthly and sometimes more frequent, I am asked a multitude of questions. What’s the current medicine regimen? What has his liquid intake been? How has his appetite been? When was his last bowel movement? What size and type of bowel movements?

Well, for me to answer these questions off the top of my head got to be quite overwhelming. How in the world is anyone supposed to remember all of that?! My six-year-old son Weston has multiple Functional Gastrointestinal and Motility Disorders (FGIMDs). His medicine regimen has changed many times over the last six and a half years. He is usually on a handful of different medicines, including oral, topical, and rectal suppositories, along with therapies as well. His liquid intake is mandatory, especially water because many of the medicines he is taking can cause dehydration very quickly.

So, I knew I needed to make a change to make things easier and simpler for myself and for anyone that would possibly need to know the information. I started monitoring and charting all the information.

How to Chart Meds and Intake 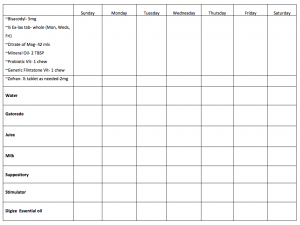 I made a chart listing each day of the week along with each medicine, dosage, and times given, as well as liquid intake such as water, Gatorade, juice, and milk. This helped me tremendously because when the doctor asked what the current medicines were or how his liquid intake was I could pull out my son’s medicine chart and have everything right there at my fingertips. I could tell the doctor the exact name of each of the medicines, the dosage, and the last time that my son had taken each one, as well as the type and amount of each liquid every day.

I know monitoring and charting sounds overwhelming and can be time consuming at first but I promise once you get the hang of doing it daily it will seem easy and make your life a while lot simpler! I started a Facebook group, Weston’s World (FGIMD- Functional GI & Motility Disorders) in 2016 to raise awareness for FGIMDs, to give updates about my son and to hopefully connect with other families going through similar struggles. This link shows an example of one of our medicine charts that is posted under files in Weston’s World.

How to Chart Bowel Movements

Weston’s FGIMDs cause him to not be able to have bowel movements on his own. We have had to keep track and chart every single bowel movement my son has had for years. Each time we go to the doctor, we all go over the charts and see what the next step in his care should to be. This assists the doctors and me in seeing if he is becoming constipated. It also helps us to ensure that the current medicine regimen is working to produce daily bowel movements that keep his colon clean and free of stool. Weston cannot go more than 24 hours without having a bowel movement or he starts to become backed up with stool.

We have used the Bristol stool chart to describe the type and consistency of the bowel movement, which most Gastroenterologists should be familiar with. This link gives a great explanation of the Bristol stool chart. We also include in our bowel movement chart the date, the time, whether he sat without having a BM, if he sat and had a BM on his own or whether it was prompted by me, as well as any accidents or stool leakage. 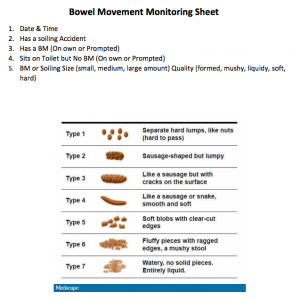 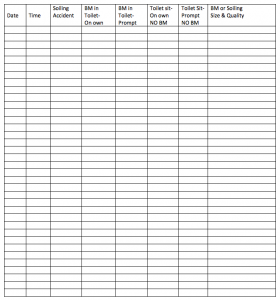 This is an example of the bowel movement recording sheet that we use. It also includes a bowel movement example picture to show what a good stool consistency is from Medscape.

The Benefits of Charting

By monitoring, recording, and charting all his medicines, liquid intake, and bowel movements, it has become much easier to keep track of his care. Charting has made my life so much simpler and helped us to learn what is helping and what is not. It also helps us to determine if certain medicines make a difference or not, and what works and doesn’t work for our little Weston. We can see if he’s been low on fluid intake and what he needs as far as liquids to ensure that he doesn’t become dehydrated. Dehydration can of course still happen, but we have found it to be less likely to happen when we are monitoring and charting it.

Weston is now almost seven and he asks me all the time, “Hey mom did you write that down?” I think that by monitoring and charting we are also encouraging him to learn and understand how important his care is and the importance of keeping a close eye on all of it.

Caroline, who goes by Carrie, is married to an amazing man and daddy—Jordan Meckstroth. They have two of the most handsome boys on the planet: Braxton (13 years old) and Weston (6 years old), and baby girl Remington Sue born still on 1-12-10, who was just too beautiful for earth.

Caroline has a BA in Communication, a Master’s Certificate in Nonprofit Management and another Master’s Certificate in Public Management. She is an advocate for Functional Gastrointestinal and Motility Disorders. She started the group Weston’s World (FGIMD—Functional GI & Motility Disorders) on Facebook in March 2016 to give updates on her youngest son Weston, who has Functional GI disorders and multiple Motility Disorders, to advocate and raise awareness for FGIMDs, and to find other families struggling with the same or similar FGIMDs. Her main goal is to spread awareness for FGIMDs so that more little ones can get the proper care, testing, and diagnosis in a timely manner!!

Weston has had GI issues since he was born in December of 2010, such as Vomiting, Diarrhea, Malabsorption, Failure to Thrive, Acid Reflux, GERD, and Chronic Constipation. Weston has been diagnosed with a Functional Gastrointestinal Motility Disorder, referred to as Chronic Constipation due to Slow Colonic Transit or Colonic Dysmotility, as well as Rectal Dysmotility or Dyssynergic Defecation. This means that his body cannot physically eliminate waste without assistance.