My nine-year-old son Bobby was born with an unfixable congenital heart defect and Down Syndrome. Between the ages of three months and three years he underwent a series of palliative open heart surgeries (the Fontan procedure) that have already extended his life. 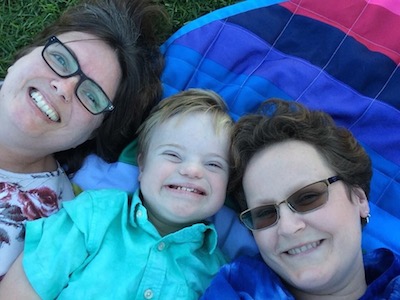 He is fortunate in that his physiology made him an ideal candidate to benefit from these procedures. At the time of his last surgery our cardiologist told us he could reasonably survive into his forties. Forty seemed so far away that we didn’t think much about the possibility of early death. However, this summer we were given a new estimate that Bobby’s life expectancy is only into his twenties, even with his body’s favorable conditions.

Bobby was born with a single ventricle heart. The initial danger of this defect is that the heart can’t keep red and blue blood separate, and so the blood flowing through the arteries is always somewhat depleted of oxygen. The Fontan process fixes this anatomical problem.

The lingering issue is that Bobby is missing his left ventricular muscle, and so his weaker heart pump slows his circulation. As the pressure in any given organ rises, the ability of Bobby’s heart to push blood through that organ decreases, potentially resulting in organ failure.

Specifically, as with nearly all Fontan recipients, his liver function is compromised because of his weakened blood flow. Blood comes into the liver but is not processed as quickly as it should be. His liver is enlarged from extra blood retention and scarred because the full liver occasionally regurgitates blood backwards. So far, his function is not impaired, but some day it will be.

As of today, Bobby is in what one doctor calls his “honeymoon phase.” He is living with a condition that is fatal in the long term, but for now his health is good. Over time his heart muscles will break down from overuse and his liver damage will lead to liver failure. At that point, additional interventions will be palliative—extending his life but never curing him completely.

After Bobby successfully completed the final Fontan procedure at age three, our cardiologist told us that his life expectancy was into his forties. Our surgeon emphasized that his timeline was so long as to almost be rendered meaningless because thirty years is a very long time given the progress of medical research. Bobby had an excellent chance of living long enough to see the development of artificial hearts as long-term options for cardiac patients.

My wife and I then proceeded with our future plans for Bobby as though he would be healthy permanently. Intellectually we knew that complications could start at any time, but it seemed foolish to plan for a death that was potentially decades away.

However, last summer just after Bobby’s ninth birthday we received sobering news from a new cardiologist. The left ventricular muscle that Bobby is missing does a huge amount of the heart’s heavy lifting. Without it, the other muscles wear out relatively quickly. It’s actually patients that are missing the relatively puny right ventricular muscle that live decades with the condition.

Ironically, this news came upon the heels of a cardiac catheterization and liver biopsy that showed that Bobby is currently thriving with his Fontan. My son hadn’t gotten any sicker, but the best estimate of his life expectancy had halved.

Coping With The New Information

I know that Bobby is not preordained to die in the next fifteen years. However, many of our hopes are diminished. The likelihood of efficient artificial hearts becoming available before Bobby declines is not as robust as when we had a thirty-year window. That makes him reliant on a transplant system that discriminates against people with intellectual disabilities.

We have much to be grateful for. Many children with this condition don’t live as long as he already has. Others have much more serious complications or illnesses. Part of me even feels a sense of relief that Bobby is not likely to outlive my wife and me, meaning we will never be forced to turn over his care to strangers. I have my low moments where these pronouncements sound glib, but I try to focus less on bemoaning the fact that Bobby was dealt some tough cards and concentrate more on helping him play his existing hand to maximum effect.

The new information has minimal impact on Bobby’s health care, simply because extending his “honeymoon” has always been our first priority. We closely monitor his condition, most recently adding a gastroenterologist and a nutritionist to his team to advise us about his liver.

Changing Attitudes toward School and Life

My attitude towards school and his day-to-day life has shifted, however. Bobby likes school for the social value but is often frustrated by or indifferent to academics. We have learned over time that he needs teachers who make learning fun and highly interactive, or else he withdraws.

For that reason, Bobby has always been placed in self-contained special education classrooms. I have had concerns that the arrangement was limiting his social and academic growth, and in fact I was in discussion with the school district over mainstreaming him when we received his new prognosis.

With the sobering news of a shorter life expectancy, my energy for worrying about “growth” dissipated quickly. Bobby has a lovely group of friends in the school’s special education program who will stay with him through graduation. His interactions with nondisabled students are limited, but I’m loathe to spend my remaining time with Bobby worrying about engineering those relationships when he is so happy with the friends he already has. I want to enjoy my boy, and I want him to be around people who accept him for who he is.

Academically, Bobby will not get a high school diploma, but then by the time he ages out of a transition program at twenty-two he may not be well enough to reap the benefits of a diploma anyway. In the meantime, he won’t be tied to a formal curriculum and he can choose learning activities that engage him.

I’m an economist by education and so I make these sorts of decisions analytically. As Bobby’s future becomes more uncertain, I place more weight on making his current situation as comfortable and fun as possible. As Bobby gets older I hope he will be able to decide on these trade offs himself, but while I’m doing it, I’m choosing love and fun over traditional lists of accomplishments. I’m choosing the people who naturally appreciate him over those who are steeped in bias.

It doesn’t make sense to me to make Bobby work harder to achieve a level of academic success he may not benefit from. And if he defies expectations and lives into his forties? The worst I’ve done is helped him live a life of enjoying the small things.