My daughter is currently in the PICU having a lot of trouble with fluid balance issues. It’s something she deals with all the time, as is the case of many children with complex medical issues, especially those with tubes or lines. Currently she is very acutely ill, so the issues are more extreme, but they are omnipresent no matter how healthy she is. 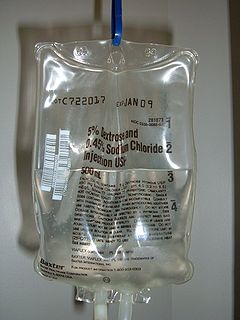 In the most general terms, the term “fluid balance” refers to the state in which the fluids you take in are equal to the fluids you put out through urine, stool, sweat, and other losses. When fluid balance is not perfect, either dehydration or overhydration can occur. In this article, I’ll go through the symptoms of being dry, being overhydrated, and some of the complications that can occur with either state.

Being Dry or Dehydrated

Dehydration is a common problem for any child with an acute illness, and a frequent problem for children with complex medical issues. Many children receive barely enough fluids to keep them hydrated on a daily basis, often due to GI problems or eating problems. With even the slightest stressor, these children get dry or dehydrated.

In kids with complex medical issues, the most common cause for dehydration is increased output. For example, children who drain their G-tubes or children with ostomies may have too much drainage or output. Drainage of bile, which particularly contains high levels of sodium and bicarbonate, can easily be dehydrating. Other children may have vomiting or diarrhea. In some cases, children may be unable to drink enough due to GI issues or because they are not feeling well, or may not tolerate enough tube feeds to keep them hydrated. Other conditions, including fever, sweating excessively, or dysautonomia may also contribute to dehydration. Some children may also receive diuretics that can cause dehydration, or have conditions such as diabetes that contribute to dehydration.

Early symptoms of dehydration include reduced urine output, darker urine, less tears, thirst, and dry mouth and lips. As dehydration worsens, children may also become lethargic or have a fast heart rate, low blood pressure, slow capillary refill, and “saggy” skin that does not seem as elastic as usual. Severe untreated dehydration can lead to seizures, shock, and even death.

There are several tests that can be used to assess hydration status. The simplest is to check the specific gravity—kind of like the density or concentration—of the urine. This test can even be performed at home with urine strips for children who experience dehydration frequently. Other tests, including checking the electrolytes in the blood, can also help identify dehydration.

There are three basic types of dehydration, and each has different patterns of electrolyte and water loss. The most common is isotonic dehydration, which means that both water and electrolytes are lost in equal proportions. Hypotonic or hyponatremic dehydration occurs when someone loses mostly just electrolytes, especially sodium. This type of dehydration is less common, but may be seen in children who drain G-tubes or have ostomies, as well as children on medications or with conditions that may cause sodium loss. Hypertonic or hypernatremic dehydration is a loss of water only without a loss of electrolytes, which can occur with certain conditions such as diabetes insipidus, or whenever there is a large water loss with illness.

Treatment for mild dehydration can often be accomplished by giving an electrolyte solution such as Pedialyte either orally or by tube. These solutions will replace both water and electrolytes such as potassium and sodium. It is important to use a solution containing electrolytes and not just free water, and to check with your doctor about which solution is appropriate for your child. Pedialyte may be too low in sodium for some children, for example. While it is possible to make your own electrolyte solution, it can be very difficult to get appropriate amounts of electrolytes into the solution, and this is not recommended without physician approval of the solution.

Children with moderate to severe dehydration will likely need intravenous fluids. These are typically balanced to include free water, dextrose, and electrolytes.

Normally, the kidneys will excrete any extra water through the urine. In some cases, the kidneys may not be functioning well, and water cannot be excreted. Some children who are very ill may also find that the body preferences other more critical organs, such as the brain and heart, and the kidneys may not remove water effectively during these periods. Children who are acutely ill or on intravenous fluids regularly may also receive extra fluids for other issues (such as raising blood pressure, receiving blood, rehydration, etc.) and these may overwhelm the body’s ability to remove excess water. Other conditions such as heart disease or underactive thyroid, or medications like steroids, may also lead to overhydration. Children who have consumed or been given too much salt or sodium may retain fluid. Children who drink or receive too much water without appropriate electrolytes may also become overhydrated and have disturbances in their electrolyte balance.

When you are overhydrated, the extra fluid tends to enter the tissues, resulting in swelling or edema. The most common areas to swell are the feet and ankles, hands, and face. Other symptoms include weight gain, swelling in other areas, pitting edema (denting when the skin is pressed) and difficulty breathing from water in the lungs. Extreme overhydration may lead to confusion and seizures.

Overhydration can be corrected in simple cases by reducing fluid intake. Some children may require diuretics, medications that cause the body to remove excess fluids to be excreted in the urine. Treating underlying disorders, such as infection, kidney disease, and so forth, may also reduce overhydration. In extreme cases, dialysis may be necessary to remove excess fluids.

Fluid, aided by electrolytes, moves in and out of cells in order to maintain an appropriate balance. For example, fluid inside cells is typically high in potassium and magnesium and low in sodium and chloride, while the opposite is true for fluid outside of cells. When a transient imbalance occurs, fluid will be pulled in or out of the cell to restore balance.

In some cases, fluid leaks into places that normally are not supposed to have large amounts of fluid, such as in the abdominal cavity or around the lungs. While difficult to explain, this phenomenon, known as third-spacing, creates edema in these areas that can be very difficult to resolve. In effect, the fluid becomes trapped in these spaces and cannot return to the bloodstream. Meanwhile, the amount of fluid in the bloodstream is reduced, which can cause its own set of issues. The first priority in this situation is to improve the amount of fluid in the bloodstream, before attempting to remove the excess fluid from the third space. It can be very difficult to remove fluid in this situation, and the treatment will depend on the underlying cause and the individual child’s status.

Fluid in the body is exquisitely balanced. Under normal circumstances, this delicate balance is maintained naturally by the body, as long as signals such as thirst are appropriately acknowledged. In children with complex medical issues, this balance is often much more difficult to control. It is of great importance to keep track of your child’s input, output, and hydration status on a daily basis, especially if your child is tube fed, on IV nutrition, or is not able to indicate signs such as thirst or discomfort.