The 3rd year resident looked positively green and distressed as I displayed the gem of a picture I had taken of my daughter in bed earlier that morning. I had been getting more and more frustrated with her bowel issues the past few months, and now that we were admitted, I was going to make a stink about it (no pun intended). 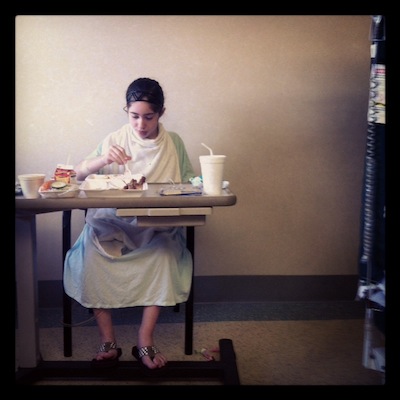 For some reason, my daughter has dealt with poop dysfunction her entire life, but recently it was out of hand. The southern gravy type muck that made its grand appearance in her diapers everyday was driving me batty. Actually, it was the fact that it didn’t stay IN the diaper that bothered me (and her) the most. A GI team was following us, but they never seemed to be around when “Mt. Vesuvius” erupted. Like lava, it flowed throughout the diaper, out of it, and anywhere else it could find. Copious amounts of orangey brown gravy stuff that just didn’t even remotely resemble what a 14-year-old child should produce everyday. I didn’t care if she WAS a child who was medically fragile and on a pharmacy of meds…this stuff was not normal…even for her!

So, I did what every good special needs mom does: I took a picture. And promptly showed it to the resident who visited my room at Oh-Too-Early every morning.

His reaction was glorious. The screwed up face! The “Ew!” The turning of the head! The shoving the iPod back into my hands!

Yes, Dr. Resident. It IS nasty, isn’t it? Now you know what I deal with…

Needless to say, my picture became quite famous that admission, and my daughter finally got the attention she needed. It’s nine months later, and we’re not dealing with Southern gravy anymore.

Parent to parent, let’s be candid.

Poop is awful. But eh…it’s not the worst thing we’ve ever dealt with, right? And truly, you get used to it after oh…I dunno…11 years or so.

Michaela has dealt with poop issues ever since we started trying to potty train her. First diagnosed with encopresis as a toddler, she lived on Miralax and scheduled bathroom “sit-ins” after dinner every night. That regularity definitely helped her become “regular,” and we enjoyed normal bathroom habits for a few years. 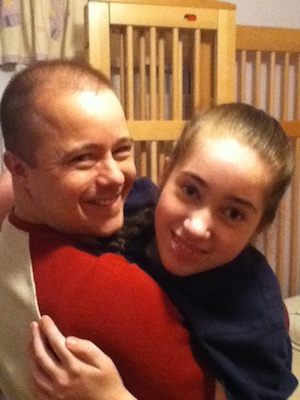 But due to an impossible to treat neurological disorder, her bowel issues would rear their ugly head when the seizures got bad. Alternating diarrhea and constipation made us a slave to Miralax, cholestyramine, and all their pharmaceutical friends. We’ve tried everything: from the more common Milk of Magnesia, all the way to the bizarre—fruit pectin and changing her tube feeds to real food pureed (instead of her normal G-tube formula). Nothing helped. We lived in constant anxiety of her colon’s rebellious impulses. Eventually, she became housebound because of it.

Because poop isn’t that awful, until you have to try to clean gravy off of your teenager’s nether regions…in a public restroom.

Ugh. No thank you.

We eventually became pros at clean-up though. We would sometimes diaper her in three different diapers: an infant one, placed like a sanitary pad, a medium sized one, and then a large to hold it all in. Sometimes I broke out cloth diapers that I used on her younger siblings. I also invested in washable underpads that went with her everywhere she went. I found the disposable versions to be too thin to work well for us. She would move around and they would crumple beneath her, rendering them useless. So we bought underpads from an online resource.

The sanitize feature on my heavy-duty washer became my best friend!

There were many nights when she would fall asleep and relax, and inevitably she would mess herself and everything around her—often sleeping right through it. But her dad and I would walk by her room and the stench would waft out under the door, trapping us at all hours of the night. Beckoning us to start the drudgery of de-gravying her while she snored.

I must admit, there were some 3am bathroom trips where I actually went back to bed, instead of answering the call of the waft….

We’re being candid, aren’t we?

It got to the point where Michaela never wore anything beside a diaper and a t-shirt to bed. Pajama pants or gowns were a joke. And she never wore anything but a skirt during the day. We even bought her a few of those wrap around towels for her to wear while she was awake. If they got soiled, we simply undid the velcro, and never had to worry about pulling poop down all over her legs. I’ve heard of some people taking pants, cutting them down the sides, and adding velcro so they pull away from the body. That would be perfect for some kids.

We also invested in a pull down shower nozzle. There were just too many times when simple clean-up procedures wouldn’t make a dent in the mess. It took the big guns to get some of that stuff off of her. Thankfully, our showerhead has a myriad of settings, including “de-grossify!”

Speaking of big jobs, can we talk about GoLytely?

Who came UP with that name?? For a medication that does THAT??

Is this some kind of cruel joke?

Well, as far as GoLytely goes, we’ve been around that block too. Due to severe colonic dysmotility, Michaela’s large intestine just could never move things out like it needed to. Miralax seemed to be the only med that would get things moving. Only thing was, it made things sloppy (hence the “Southern gravy”). So, from time to time, an adventurous GI would decide to stop the Miralax, in an effort to stop Mt. Vesuvius.

By that time, another GI would be attending, and they would be stuck with a kid who was bloated to third trimester pregnancy. Of course, GoLytely would be the prompt therapy.

Except, it would take THREE DAYS and THREE GALLONS for it to do the job.

The nurses on the floor got very used to Michaela’s GoLytely play dates. See, you take a kid that is constipated with already sloppy poop (I forgot to mention that her colon wouldn’t remove the water from her stool, so even though she was constipated, it wasn’t hard…ever), and add a swimming pool of GoLytely, and you have recipe for disaster.

Did I mention that Michaela doesn’t know how to go to the bathroom? She can’t tell us when she has to go…no sphincter control, you see. Which means GoLytely results landed in the bed. Oftentimes all over the bed…

One time, the nurse and I were chatting, when all of a sudden I heard water splashing on the floor. I thought one of us had left the faucet running.

Ohhhhh…if only it was that pleasant.

Nope. It was a blow-out…of Vesuvius proportions. All over her, the bed, the floor. She was pretty much floating in muddy water. The nurse’s eyes were like saucers. The CA, a no-nonsense black woman, got down to business, “Oh girlie, now you done it. You ain’t even jokin’. (splash, splash, plop) That is not funny Michaela…..GIRL! Get the haz-mat suits ladies, we gotta job to do!” Two nurses, the CA, and myself all gowned up: booties, masks, gloves…the whole nine yards. One nurse was even well stocked with peppermints for us. You’d be amazed at how sucking on a mint keeps you from smelling what’s around you!

But let’s just say, the linens were a total loss, as well as the towels we used to wipe her down. We’re talking straight-up Pompeiian destruction here.

(Thank God it was the hospital linens, and not mine. No sanitize feature could’ve handled that mess!)

Michaela has since had a colostomy placed. Her colon was just too dysfunctional to treat medicinally. We simply needed to take it out of the equation. I pushed for the procedure for at least six months (and three rounds of GoLytely) before our GI team would get on board. But I learned how to push respectfully, and how to deny treatment peacefully. I realized that living with poop issues was not as bad as many people would think. You just get into a routine, and DO IT. I taught myself how not to be fazed by the smell (and there were some interesting ones, for sure), how to contain the mess efficiently, and how to clean up quickly and maintain damage control.

Not that poop issues shouldn’t be addressed just because we learned how to manage them. But with children who are complex, GI issues are so common, that I find many parents—like us—get a lot of run-around therapy…leading to months and months of clean up and coping. If we couldn’t figure out a method to survive the madness, we would’ve dealt with more anxiety than we already did. By using tools at our disposal, being creative, and keeping things light and positive during the nasty times, we survived a situation that tried to make our lives miserable.

Oh, and by taking one really good poop picture…that helped a lot too!

Kelly Morris is a stay-at-home mom of six kids, including Michaela (Lennox-Gastaut Syndrome, autonomic dysfunction), and Gabe (Eosinophilic Esophagitis). No stranger to rare disorders, she spends a lot of her time in and out of Children’s hospital, researching treatment, and advocating for her kids. She also enjoys homeschooling, camping, and reading in her “spare time.” Check our her kids’ Caringbridge pages at Caringbridge.org/visit/michaelamorris and Caringbridge.org/visit/gabemorris.