All parents believe they single-handedly support the diaper industry. I, on the other hand, know it to be true. For my fourteen-month-old daughter, Sophie, diarrhea was not a passing fad; it was a way of life. With multiple episodes on a daily basis, my husband and I found ourselves going through boxes of diapers every week. Most nights she would “explode” through two diapers, pajamas, sleep sack, and onto her crib sheet. Between the g-tube leaks, reflux, and diarrhea, my washing machine was my best friend. 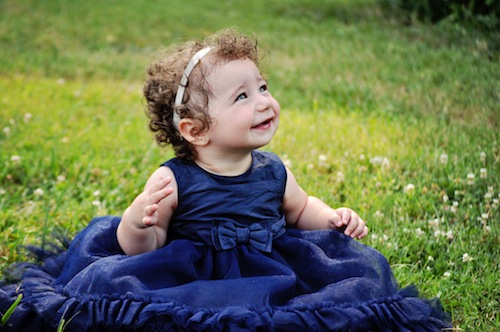 When Sophie started having diarrhea last October, her doctor was not concerned. She believed it just was a side effect of an antibiotic, Erythromycin, which she took to help her motility. We tried adjusting the dose and adding fiber, but it just got worse. After several frustrating months, I made an appointment with a different GI for a second opinion.

Our new GI took my daughter’s symptoms more seriously. She weaned her off of the antibiotic and ordered several stool studies. All of the lab work came back negative, including a stool test for the bacterium Clostridium Difficile, otherwise known as C diff.

At this point her diarrhea was unmanageable. I was afraid to take her out of the house, because she would leak all over the infant car seat or my lap. Once, when we were taking family pictures, she had her largest explosion to date—all over my husband. Shirt and pants, completely gone. At least we were taking pictures near the men’s section in Sears.

At that point our doctor recommended a short course of antibiotics to treat bacterial overgrowth. Miraculously, the diarrhea resolved. We were thrilled. I had forgotten what normal poop had looked like. Unfortunately, that didn’t last long. A few weeks later her diarrhea came back with vengeance. 104 fever with no other symptoms. The pediatrician checked her ears, throat, urine, blood and stool. Everything came back negative. The diarrhea now had blood and mucus in it. After two weeks her fever finally subsided. We exhaled. 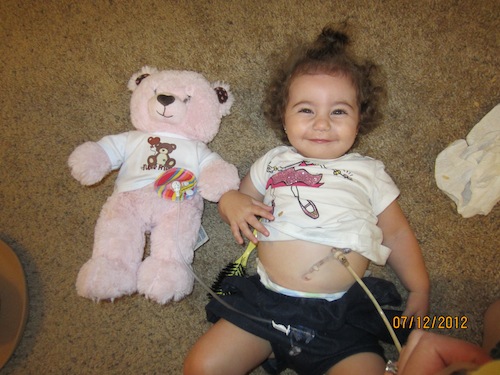 Sophie still didn’t seem herself. A week later her high fever came back with even worse bloody diarrhea. That is when we really started to panic. We had her tested for every GI intestinal disease imaginable. At this point our doctor discussed scheduling a colonoscopy to check for Crohn’s Disease and other conditions. I waited by the telephone, desperate for an answer. Finally, two weeks later our doctor called and said that Sophie had C diff. She had tested negative to C diff five times in the previous months. She also had colitis, as a result of C diff. We were relieved that she was diagnosed with something easily treatable—or so we thought.

The only good thing I have to say about C diff is that you always know when it’s time to change your kids diaper—from a mile away. Our family became vigilant handwashers, and had a dedicated bathroom for Sophie’s baths. We went through several rounds of different antibiotics. Although her symptoms did not subside, she still tested negative for C diff. We scheduled the colonoscopy. The day after the colonoscopy they called to tell me that my daughter was positive for C diff. We restarted the antibiotic. A few days later my doctor called to say that Sophie had an intolerance to lactose and maltose. We started Sophie on Lactaid milk while we waited for the dietician to research the optimal formula for us. Overnight, her diarrhea disappeared.

Once again, this only lasted a few days, as we ended up in the hospital for another high fever. They started feeding her Neocate and switched her antibiotic. Her diarrhea returned. When I mentioned my concerns with her diarrhea to Sophie’s doctors they brushed me off. When I asked if the diarrhea could be a result of the Neocate they looked horrified at me, and said that unless she had a corn allergy they were more interested in treating her fever than worrying about her diarrhea (apparently doctors become very confrontational when you question Neocate).

After discharge she continued to have diarrhea and started vomiting several times a day. I was beyond frustrated. At this point, Sophie had been having diarrhea for nine months. We took care of the C diff, maltose, and lactose. What else could be wrong? Our doctor said that as long as she tests negative to C diff and is gaining weight we shouldn’t be concerned.

I was furious. “Gaining weight” was not good enough for me. My daughter’s butt was so irritated at that point that it bled. What type of quality of life is it to have diarrhea forever?

Sophie’s vomiting became worse, and she couldn’t tolerate Neocate anymore. I switched Sophie back to the Lactaid milk. Once again, her diarrhea disappeared. As soon as her allergy testing came back, I started adding small amounts of food into her milk (our first attempt at a blenderizied diet ended in projectile vomiting and an allergic reaction). We are slowly transitioning to a full blenderizied diet and her poop couldn’t be better!

After nine months of dealing with bacterial overgrowth, recurrent C diff, food intolerances, and general formula intolerance, we are down to only having to use five or six diapers a day!

Some lessons I have learned about diarrhea:

Dena resides in Baltimore with her husband and two adorable children, Emma and Sophie. She is a stay at home mother, using her background as a social worker to help manage her children’s medical care.