We adopted a son who came to live with us when he was 12. When he first arrived, he was kicking, pulling hair, punching, and ripping things off the wall. He was not potty trained at the time and wore diapers. He has cerebral palsy and is developmentally at a toddler/pre-school level. 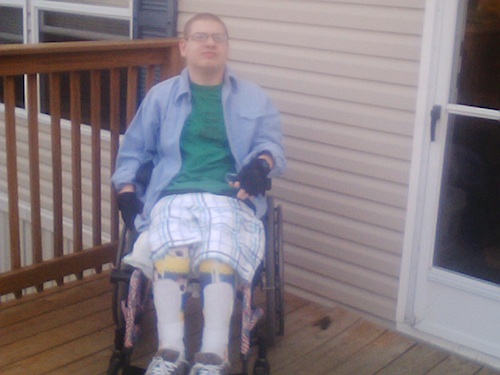 When he first came to live with us, his rear end was bloody from being in diapers and he always had a hard stomach. I immediately called the pediatrician, who told us to use a special cream and put saran wrap on his bum. I was shocked, but we did it and the cream worked.

We were then referred to a Gastroenterologist (GI doctor). So we went, and when the doctor felt his hard stomach, he said my son was packed with poop. He looked at his chart and called doctors around to try to get some more information on his background. They found out my son had never been to a GI doctor in all of his twelve years!

Unfortunately his rectum is stretched out, and the doctor said that he will always have pooping issues. He diagnosed him with encopresis, which is typically an involuntary leakage of stool. He said it can be caused by the combination of his cerebral palsy and also being neglected for so long. Holding in stool could also be an emotional coping mechanism for him.

In order to improve his stooling habits, we went through many trials of medications. First, the doctor put him on the laxative Miralax every three days, but that did not work too well. He was then increased to every other day of Miralax and Senna as needed, but the Senna gave him nightmares. Finally we settled on frequent enemas and Miralax every day. He poops a lot with the enema but doesn’t poop when he doesn’t get it. He gets the enema about every three to four days. Due to his rectum being stretched out, he will always need enemas and continues to require Miralax every day.

With this regimen, he was out of diapers and into pull-ups at age 13 years. And at age 13 he was finally potty trained for urination!

It was not until he was 17 years old that he first felt the need to poop. Now, at age 19, he can wear underwear on the days he does not have enemas. Since he has permanent damage of the rectum he continues to need pull-ups on enema days.

We have discussed putting a port (cecostomy tube) into his intestine to give him an enema from above every few day. We decided against it because he could get an infection and the doctor was not sure it would help. It took so long to get this far, and since his current regimen is working we decided against the port.

We are continuing with Miralax every day and an enema three or four times a week. He does have intense cramping with the enemas, but the days between he feels good. It is not a perfect ending but better than the beginning. We always believe in hope and hope for something else down the road, but for now we will continue going to GI doctor and be amazed at how much our son has accomplished! Nothing will surprise us, and maybe someday he won’t live in this pain.

Tabatha Dean is a wife of Mr. Dean and mother of John.  She also has four furry kids—two cats and two dogs. Tabatha enjoys volunteering throughout the community, camping, attending church, attending numerous family functions, and works per diem as a Social Worker.