I want to begin by stating this article is not intended to endorse a candidate or pass judgment on a political party. Instead, it will simply look at one proposal, turning Medicaid into a block grant program, and the effects this proposal will have on children with disabilities.

What are Block Grants? 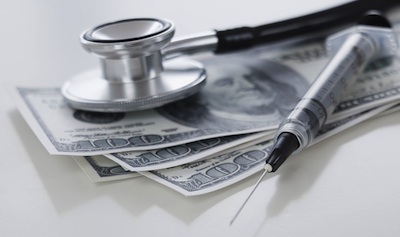 I think we can all agree that the Medicaid system could use some reforming. It is an expensive program, and it is not free from fraud and waste.

One suggestion for reforming Medicaid is to convert the program to state-based block grants. In this system, the federal government would determine each state’s general financial need based on population and other factors, and would award the state a lump sum in Medicaid funding. This lump sum could then be spent however a state wanted, intentionally free from most federal rules and regulations. When the federal lump sum has been exhausted, the state cannot receive any further federal funds.

Currently, states receive federal matching dollars for each dollar they spend on Medicaid. This encourages states to spend their own dollars on Medicaid if they want to receive additional federal matching dollars. Under block grants, state spending would no longer be tied to the receipt of federal dollars. States would be free to spend or not spend additional state dollars on Medicaid, potentially reducing state spending for Medicaid considerably in some instances, but also putting states at financial risk if they run out of federal dollars as a result of an unpredictable event, such as a natural disaster.

While some political groups have suggested they would leave some federal protections and regulations in place, such as mandatory coverage for certain populations, other groups truly want to remove all federal oversight of the Medicaid program, allowing states to fully design their own programs with minimal to no oversight from the federal government. It is unknown how much federal oversight and protections would remain.

In addition, some block grant proposals call for dramatically reduced federal spending on Medicaid over time, meaning significantly fewer federal dollars will be available to states. For example, a House budget plan from 2011 would have cut Medicaid by 34% or $1.4 trillion dollars over a 10-year period by eliminating the Affordable Care Act and changing to a block grant system.

The Arc, a non-partisan non-profit organization that supports people with intellectual disabilities and their families, has already prepared a general position paper on what block grants are and how they would affect people with disabilities. The primary issues raised by the Arc include removal of guaranteed access to Medicaid (entitlements), elimination of protections that mandate required benefits, and the potential stoppage of federal dollars when the grant runs out.

States are already strapped for cash due to the economy, and many are currently trying to trim their Medicaid budgets. Under current regulations, states are barred from removing any classes of people from Medicaid until 2014 for adults and 2019 for children. If Medicaid were switched to a block grant program, however, states could potentially remove certain populations from Medicaid, cap the number of individuals served, or scale back benefits considerably.

Various scenarios predicting Medicaid enrollment under block grants estimate that 41% to 58% of individuals would lose coverage.¹ While it is unknown which populations states would remove from Medicaid, it is likely that states would try to target some of the higher cost users in their states. People who tend to be high cost users typically include people with disabilities and the elderly. See Figure 1. While the elderly and people with disabilities make up only 25% of individuals enrolled in Medicaid, they are responsible for 66% of Medicaid spending. 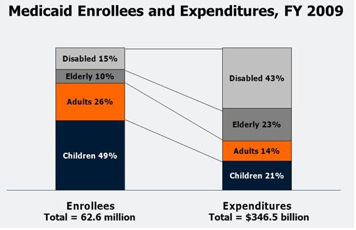 States would have to choose which populations could benefit from Medicaid the most. States would likely restrict Medicaid coverage for healthy adults to only the very, very poor. Similarly, healthy children cost Medicaid very little money but make up 50% of recipients. While in general it is good public health policy to keep children healthy and insured, children don’t vote, and it is expected that block grant policies may limit the number of children insured through Medicaid quite significantly. On the other hand, the elderly vote in large numbers and tend to have more political clout, meaning they may have better luck preserving their share of the Medicaid pot. People with disabilities unfortunately have little political clout and may see their share of Medicaid cut considerably through block granting.

Medicaid would also cease to be an entitlement, meaning that states could cap the number of enrollees in certain Medicaid plans or groups, denying services to some of the most neediest citizens, who could flounder on waiting lists for years. In addition, currently mandatory and optional services could be cut for adults and children, leaving families with inadequate coverage, and potentially leading to greater mortality and morbidity.

No matter what decisions states make, there will be rationing of Medicaid services under block granting, which will likely lead to lower levels of Medicaid coverage for some groups of children and people with disabilities.

EPSDT: The Protection that Guarantees Nursing, Therapy and Specialty Care

One of the most important protections in the current Medicaid program is a little known program called Early Periodic Screening, Diagnosis and Treatment (EPSDT). You can think of this program as the “package” of services provided to every child who receives financially-based Medicaid or a Medicaid waiver. It is the greatest protection for children in Medicaid, and the provision that mandates that children receive critical services, including therapies, home nursing, coverage for supplies and equipment, and other necessary services.

The EPSDT program began during the late 1960s, when it was determined that one out of three young males was not eligible for military service due to a physical, developmental or medical problem. This was especially true for lower income males. In order to correct this problem, the Medicaid rules were changed for children. Doctors were required to screen children as early as possible and on an ongoing basis for any problems. If a problem was detected and diagnosed, the doctor was required to prescribe a treatment plan, and Medicaid was obligated to pay for it. Eventually, these rules were applied to all mandatory and optional Medicaid services, thus providing children with an incredibly comprehensive set of benefits, far more generous than private insurance in most cases.

Currently, EPSDT requires that states cover all medically necessary services for children who financially qualify for Medicaid or participate in Medicaid waivers. Most states also expand these same benefits to moderate income children who receive Medicaid coverage through a state-based Children’s Health Insurance Program (CHIP), though this is not federally required.

A block grant system would make EPSDT null and void, unless political leaders chose to leave certain protections in place, which is unlikely. Without the guarantee of EPSDT, states could determine which services they do and do not cover. For example, many states have refused to provide diapers and other incontinence products through Medicaid, but were forced to do so because of EPSDT. Other states have tried to eliminate or reduce home nursing care services or prescription drugs, but have thus far failed because of EPSDT.

With a block grant system, EPSDT would likely disappear, thus removing the greatest protection mandating children receive medically necessary services. Cash-strapped states will be given full power to determine what services they will cover and for what populations. States would likely limit or refuse to cover certain critical services (similar to what private insurance plans have done), such as therapies, home nursing care, equipment and supplies. If these services were eliminated, children would have no protections or legal recourse to obtain them. As such, many children would no longer receive medically necessary care and services, leading to poorer outcomes, increased hospitalizations, and potentially even the deaths of some children.

Currently, many children with disabilities or complex medical needs receive primary or secondary Medicaid coverage through Medicaid waiver programs, often called Katie Beckett, TEFRA, or Deeming waivers. Waivers are optional programs that extend Medicaid to people who would not normally qualify or need additional services. These programs are typically available to any children who would otherwise have to live in an institution (where they would be eligible for Medicaid) to receive necessary specialized care and services. At this time, most programs are open to children of all incomes, though acceptance criteria vary widely by state. States must apply to the federal government for a waiver program, and the government pays at least half the cost of the program. Waiver programs come with certain assurances and protections, including full EPSDT benefits for children.

Under a block grant system, Medicaid waivers would be eliminated entirely. The federal government would no longer determine who is eligible for or entitled to Medicaid services. Instead, states could determine which children they want to serve, and what services they would provide them. Based on the fact that cash-strapped states including Florida, Illinois, and California have already tried to eliminate or drastically reduce services, it is very likely that these small waiver programs would be cut or eliminated in many states. Hundreds of children currently able to live at home with services and supports could be forced into institutions.

Block granting as currently proposed would have a devastating effect on children and people with disabilities, eliminating coverage for many of them and reducing benefits considerably.

But the likelihood of them continuing to reduce costs is unknown. If millions of people become uninsured as a result of block grants, these people will still require healthcare. Most likely, the burden of their care would shift to the emergency room and hospital, with increased costs for charity care to states and providers. Past experience has demonstrated that this type of inconsistent and uncoordinated care results in dramatically steeper healthcare costs.

If states responsibly create unique programs to cover their citizens in a comprehensive way, it is possible they could reduce costs. However, this option is already available through type 1115 demonstration programs, within the context of the current Medicaid system, including appropriate protections. There is no need for a draconian block grant system when the flexibility to create comprehensive yet individualized state-based programs already exists.