Turning on Hearing: Thoughts on a Cochlear Implant

This past January, my son, Joseph, received a cochlear implant to help him hear. The common misconception about a cochlear implant is that he will immediately be able to hear, understand language, and be able to talk. If only it were that easy. As the ENT always says, “Now the real work can begin.”

What a Cochlear Implant Truly Means

When Joseph wakes up from surgery, he will have absolutely no hearing in his left ear. When the electrode ray is inserted into his cochlea during surgery, all residual hearing will be wiped out in that ear—forever. It cannot be reversed. With both of us being musicians, that one fact alone—along with many others—is what has made this decision SO tough. Willingly wiping away your child’s residual hearing is gut wrenching, but knowing the long term positive effects of ultimately giving him hearing are almost too much to comprehend. 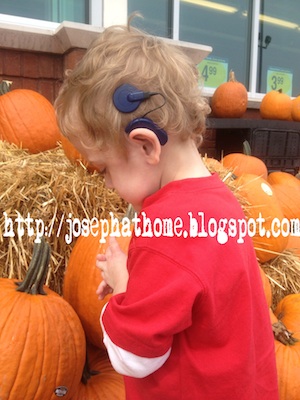 Once activated, Joseph’s hearing age will be zero months—like a newborn. His brain will have to learn to organize sound, language, and learn to process sound. Yes, Joseph “understands” a lot right now, but who knows what his brain understands. He has learned what “let’s go take a bath” sounds like to HIM, but what does he REALLY hear? It could be a string of sounds that he has interpreted as such. His brain will have to be completely retrained to REALLY understand “let’s go take a bath.”

Several parents have told us that their child didn’t even understand his/her own name after being activated. With Joseph having Auditory Neuropathy, goodness knows what his brain has actually understood for three years.

Many kids who have been hearing aid users have a tough transition to the implant. They are used to the sound of their aids and they want them instead. We fully expect this to happen.

The hope among Joseph’s therapists and doctors is that because Joseph has been in such intense therapy, and because he does have good receptive language, his “rehabilitation” should be quicker than someone who hasn’t been in therapies. And by quick, I’m meaning months and years. Not days and weeks.

Will Joseph need an implant in his right ear? Who knows? Ideally, we would love for Joseph to be old enough to make that decision. However, if we aren’t seeing much progress in a year or so, we will start considering a right implant. A lot depends on how much the neuropathy in his right ear impacts what he and his brain are understanding through the implant.

Needless to say, an implant is not an immediate fix—it is just the beginning. If you know us well, you know how much we have wrestled with this decision for over two years. It isn’t like his G-tube. It isn’t reversible; it isn’t something that we can take out if we decide we don’t want it anymore. It is permanent—forever. That is why insurance companies and doctors require parents to undergo a psychological evaluation as part of the candidacy process. Parents have to know that they are making a lifelong commitment. I even had to write letters to both insurance companies in addition to the evaluation.

We are 1000% confident that this is the right decision for Joseph. Making the decision doesn’t wake me up at night anymore. It’s thinking about all of the above that keeps me up.

The beauty in all of this is that one day Joseph will look at us and say, “I love you,” or, “Hi, Mommy and Daddy.” Those are the days we have to focus on. One day, he will be able to function like every other hearing person in society.

That’s what makes the difficulty of the post-surgical months all worth it.

Laura Martin is the NICU Ambassador Director at Graham’s Foundation, a non-profit organization that offers support to parents of premature infants. She is also a blogger for Preemie Babies 101. Before joining the team at Graham’s Foundation, Laura taught middle school chorus in the metro Atlanta area. Laura is mom to three: Joseph, Campbell, and Emily. Joseph and Campbell, fraternal twins, were born at 24 weeks gestation. Campbell passed away after 23 days of life. Joseph spent 228 days in the NICU before coming home. As a result of prematurity, Joseph has diagnoses such as auditory neuropathy, hypotonic cerebral palsy, short bowel syndrome (he has a G tube), asthma, vision impairment, global developmental delays, and he also has multiple food allergies. Emily was born at just over 39 weeks. Laura, her husband, Scott, Joseph and Emily live in Georgia. Laura and her journey raising a survivor twin can be followed on her blog: http://josephathome.blogspot.com.