G Tube: Didn’t Want It, But Now I Love It

My son Eli was born extremely premature and only weighed 2lbs 4oz. He had several surgeries before he was able to leave the hospital at five and a half months old. However, for some reason, one surgery stands out from the rest: the placement of his G tube when he was only 20 months old. I took this surgery personally. 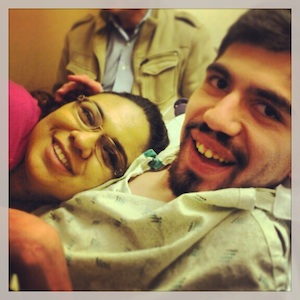 There was one doctor in particular that lacked bedside manners (to say the least) and was very blunt and rude. Oh, I forgot to mention that I was very young when I had my son. Therefore, I was seen as an unfit mother before I even was given a chance. This doctor always seemed to make it a point to mention that my son was not coming along as she expected. She would say that he was failing to thrive. At this time he was still eating and drinking out of a bottle and never had any swallowing problems.

I fought the G tube placement because I saw it as another THING that my son had. It seemed so unnatural. I was not ready, though I knew that it would help because he had projectile vomiting, which limited his weight gain. It was tough the first year or so, especially the changing of G tube every three months and the stares of strangers during feeding.

At age three my son had a massive seizure that lasted for over an hour. For some reason unknown he stopped eating by mouth. Therefore, we were left with no choice but to use the G tube for his nutrition completely.

My son is now 19, and it’s been a long and winding road. He is non-verbal but understands. He takes part in his feedings by holding the tube and clasping it. I have come to terms with his G tube feeding, and now I see it as a blessing since it is the way we keep him alive. I now love feeding him and sharing those moments in the day that we connect. It is our special moment, and I am certain that he looks forward to it not only for the meal but also for my undivided attention. The G tube is now a blessing.

Susie Chavarria-Torres is a graduate of Our Lady of the Lake University (OLLU) and has her B.A. in Psychology with minors in Sociology and Fine Arts.  She has a certification in violence prevention. She has been married for ten years and has four children. She always appreciates a challenge, and she loves books and movies.