Spencer was a puke machine. Was. After his fifth formula in a year resulted in his normal vanilla gastric volcano, I decided we were done with formula. I had heard on several Facebook groups about this thing called Blended Diet, but I wasn’t quite sure how to start my one-year-old on it. A pre-packed formula has been the norm in the feeding tube community for years. How does one exactly “go rogue” and feed her child real food? How could something so simple seem so complicated?

First, let me tell you about my tubie. Spencer has a rare genetic syndrome that left him with a host of issues. As a newborn, he never really figured out the whole sucking, swallowing, and breathing thing, due to a submucosal cleft palate, bronchomalacia, tracheomalacia, laryngomalacia and micrognathia. He had an NG tube placed when he was a day old and a gastrostomy tube when he was a month old. He lost his suck all together shortly after being released from the NICU. He toyed with the idea of eating baby cereal and purees when he was around six months old, but eventually started to reject those as well. He never had any major oral aversions, but getting him to eat was always hit or miss. 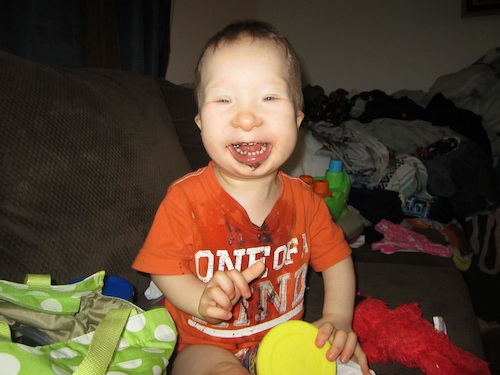 Plus he was a puker. Those who have a puker know my pain. Spencer wasn’t just a puker, he was the king of the pukers. Our lives revolved around vomit. Spencer ate every three hours, around the clock. This also meant our lives ran on three-hour intervals, day and night. When we would do his feed, we waited an hour to see if he would hurl, and then went on with our lives. This meant we had two hours to go do any errands we had to do and to get back in time for the next feeding. Feeding him away from home meant a risk of him puking all over the place, and thus resulting in quite an embarrassing situation. This kid didn’t just spit up—it was projectile vomiting. He could clear several feet, thus resulting in his being referred to as a vanilla volcano. Everything in our world smelled like sour vanilla, and we had some fun stains on our apartment floor (we didn’t get our security deposit back) and on nearly everything he owned. I still can’t do anything vanilla scented without feeling sick to my stomach.

We would try a formula, it would work for a little while, and then Spence would turn back into a puke machine again. I would get so frustrated when this would happen, because each time we thought we found a cure for his chronic vomiting. Then I had enough. I called our high-risk clinic at Cincinnati Children’s Hospital and asked them for advice. I told them that I wanted to puree food for Spencer because clearly formula wasn’t cutting it for him. Prepared to fight for my cause, I wasn’t told no. His doctor thought it was a great idea and she put me in contact with a pro-blended diet nutritionist. The nutritionist emailed me some spreadsheets on how to provide a well-rounded diet per caloric intake and told me good luck.

So I had some spreadsheets. What was I supposed to do with that? I turned to the Facebook group Blenderized Food for Tubies for help. Most importantly, I met Aadhaar O’Gorman, tube feeder extraordinaire. Aadhaar quite literally wrote the book on tube feeding, from a pro-blended diet perspective. Being tube fed himself, he could even tell us which foods didn’t sit well on the stomach and if serving it hot or cold mattered. He gave me a ton of great ideas on what I could feed Spencer, with great nutritional content at a practical cost. He also—whether intentionally or not—instilled in my brain that commercial formula was bad. One time he posted on the Facebook group a fact sheet of the contents of commercial formula. The numbers were so bad that I haven’t given Spencer a milliliter of formula since. Aadhaar, who passed last year, is probably smiling down on me as I write this.

Roadblocks to the Blended Diet

I know for some that financial reasons are a roadblock for doing blended dieting. Let’s face it, most insurances and WIC will cover our kids’ food for free. Many of us live on a limited income. We went from paying nothing for his food, to nearly paying for everything. Luckily, Spencer receives WIC and the amount of milk they provide is just enough to cover his blends for the month. We also get a very small fruit and vegetable allowance. Otherwise, since Spencer is lactose intolerant, we are on our own. For the most part, we do what I call family style blends. I make dinner for all of us, but make enough extra to make the entirety of Spencer’s blend for the next day. For example, if we have chicken for dinner, I make Spencer a piece of chicken along with it. If we have carrots, I make a ton of carrots to throw in the blend. We eat a lot of frozen vegetables. I usually do fresh fruit, but will occasionally do frozen as well. We also will buy things that freeze well when they are on sale. I often by avocados in bulk and puree them with lemon juice and freeze them, which will last quite a while.

Another potential roadblock is the cost of a commercial grade blender, which usually runs around $500. For a while I was using a regular old blender that I bought at Wal-mart. Making blends was a slow and annoying process. Mind you, it can be done and the puree will fit through a 12 French button, but it involves a lot of overcooking and straining. We were pretty fortunate to be able to get a Blendtec blender. I gather up all the food I want to use, throw it in all at once and hit the highest speed button. It’s amazing. I’ve heard some people have had success with a Ninja blender, which is about a fifth of the cost of a Blendtec, or another commonly used blender, the Vitamix. Both Blendtec and Vitamix usually offer a medical discount with medical documentation.

Another roadblock is not having support from your medical team. For us we are lucky enough to have an amazingly supportive GI. I know several people who have just gone rogue and did a blended diet without the support of their doctors. I also know some who have sought out doctors who are pro-blended diet. It shouldn’t be scary to feed our kids real food, but it is, especially without doctors on board.

Pros of the Blended Diet

While a blended diet isn’t appropriate for all children, for many who are parents of chronic vomiters, it’s a godsend. Because of the thicker texture of the blended diet, along with the nutritional value of real food, pukers often stop puking on a blended diet. Blended diet is also a great way to control volume for kids who can’t handle large feeds but need calories.

Aside from the gastrointestinal benefits, there is this sense of being in control that comes from doing blended dieting. I know what is going into my son’s body, and I have control over it. It’s easy to watch closely for foods that he cannot tolerate. When you start doing blended dieting, it’s ideal to start with one food at a time so you can watch out for allergies. As time goes on, we found a core group of foods that work for us on a regular basis, but also add in a new food from time to time to see if it works for him.

Making and planning blends can be time consuming; however, once you get the hang of it, it can be done in no time at all. We make a lot of Spencer’s food with our food. Then we add the rest of his stuff to make up a well-rounded diet. He is on a high protein, high calorie diet, due to poor growth and weight gain. Our typical blend will either be meat or tofu, a veggie, some fruit, olive oil, flax seeds, one avocado, oatmeal, peanut butter, and soymilk. We then blend it for 50 seconds and it’s done. I store his blend in a three-quart Rubbermaid container or in plastic canning cups. We usually do six feeds a day via syringe, and adjust our volume according to how large the blend is.

Even though learning how to do blended dieting may be challenging, there are some perks. There have been studies done on blended dieting, and some research suggests that kids who do blended diets are more likely to eat orally. In a study done through Cincinnati Children’s Hospital, 19 of 33 participants in their puree diet study showed an improvement in oral eating. While my son wasn’t in the study, he is one of those lucky kids. He went from eating virtually nothing by mouth to eagerly accepting foods, shortly after switching from formula. He is now in the beginning stages of self-feeding. It could be due to appetite, or it could be from not puking all the time, but either way he’s eating!

Most importantly, blended dieting gives me a since of normalcy. Let’s face it, feeding our kids through a tube in their nose or stomach isn’t what society perceives as normal. Sure, it’s our normal, but every once in a while I would think about how incredibly strange it was that all my son’s nutrition came from a can. How one eight-ounce can could keep him alive. With blended dieting, I feel a little more normal. I can choose what he is going to have for supper that night. While it may not be the same way the rest of us are eating, it’s still going to the same place.

While doing a blended diet was kind of scary when we first started out, I feel 100% secure making blends and feeding him now. Spencer has been formula free for over a year and a half, and I can’t remember the last time he vomited. He is gaining weight and height and is thriving. While blended dieting isn’t the norm in our community, if Spencer didn’t have feeding problems and need a feeding tube, he would be eating real food.

If you’ve been thinking about blended dieting, try it. When we started, I put baby food bananas in with some Pediasure and went from there. If you’re curious about it, there is an entire community out there who will support you and help you along the way. It worked for our puke machine, and it might work for you, too.

Special thanks to Aadhaar O’Gorman for showing us the way. He, along with many others, have been an invaluable resource in the blended diet tube feeding community. We miss you, my friend. Buy his book Complete Tubefeeding.

Rachel Nichols is a stay at home mom to nearly three-year-old Spencer. They live in Ashland, Kentucky. You can follow their journey Joining the Club Foot Club.