The Importance of Finding the Right Nurse

Hannah may not be able to sit up, roll over, feed herself, or even protect her airway when she swallows. But she can still certainly communicate her displeasure when she feels insulted by a nurse. 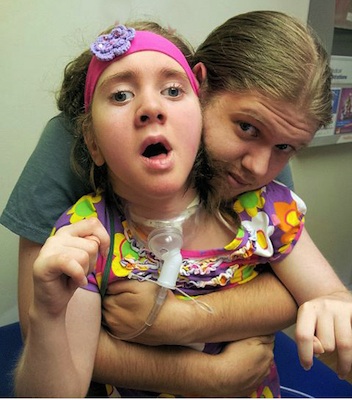 Hannah sitting up with help from her brother, Zachary, her guardian and protector

We are very fortunate to have a steady crew of nurses taking care of Hannah around the clock, regulars who have learned her unique set of needs and characteristics. She has trisomy 14 mosaic partial, a chromosomal anomaly so rare, only 15 to 20 people in the world are known to share it. “Mosaicism” means that she has a mix of normal and abnormal cells, and that mix can vary tremendously from organ to organ. So the effects of trisomy 14 mosaic partial also vary tremendously from one “owner” to the next, ranging from hardly any to the profound.

Trisomy 14 in any form is rare among living individuals. It accounts for a large percentage of miscarriages, according to an article we read soon after her condition was identified at 10 months of age. Because of the small population and the variability of effects, it’s impossible to predict how Hannah’s condition might progress over time. We constantly live with the unknown, the unexpected.

Her genetic profile affected Hannah mostly in terms of muscle coordination. We see her try to respond when her physical therapist requests her to do something, so we know she is hearing and understanding, at least some. But she can’t get her body to cooperate with her, so she has no way to speak or even point at things.

Coordination even affects things like temperature regulation throughout her body, and digestive functions. Her body and her brain don’t “talk” to each other very well, leaving limbs and organs to sort out their own thing independent of the central control most of us take for granted.

That’s why it is so important to us that Hannah’s nurses have learned to “listen” for the messages that are so hard to pick up.

One of our former regular nurses (let’s call him Bob to maintain his privacy) drove 90 minutes one way to get here. We were very happy with him, and he seemed to really like our household and Hannah, but with gasoline prices what they are, he felt compelled to take a different case closer to home. But occasionally he fills in when one of our current crew cannot come to work.

Once, Bob came here after an absence of about three months. When he walked into her room, Hannah pooched out her lower lip, turned her head away (she can control gross motor muscles to some degree), and refused to look at him for over an hour. Eventually, after he had talked to her and stroked her hair and otherwise acted contrite, he apparently earned her forgiveness. She finally turned back to him, and spent a long time just gazing at him.

Another former regular moved back “home” to Nebraska to care for a sick sibling (let’s call her June). She came back to visit relatives here just last month after an absence of over a year, and called to see if she could come pay her respects to Hannah.

June had been a night nurse, so she spent much of her time alone with Hannah and no one else. When June walked into Hannah’s room, Hannah immediately locked eyes with her, then half-closed her eyelids and relaxed. June stroked Hannah’s hair, and Hannah’s pulse dropped as low as it ever goes without being asleep. She doesn’t have the ability to smile normally, but those of us who know her best all agreed she had the “Mona Lisa” smile we’ve come to recognize as representing the height of well-being for Hannah.

Pulse and oxygen levels are the main way Hannah communicates with us. When she is distressed, her facial expression may not change at all (although sometimes she grimaces and turns red), but her pulse will spike. A quick inspection may reveal a sheet creased underneath her, a wet diaper, an arm trapped in a sheet. If nothing is apparent, the next step is to check temperature (which gets checked regularly anyway, of course), lung sounds, belly sounds, or skin, looking for anything that could explain Hannah’s apparent distress.

In this situation, a nurse who truly knows Hannah becomes, literally, a life-saver.

It works the other way also. We have had a few nurses who just didn’t work out.

Maybe they weren’t comfortable with Hannah’s needs (she generally needs suctioning every 10 to 15 minutes through her trach), or were frustrated with their inability to suss out Hannah’s mysterious messages.

Maybe they weren’t very dedicated. One of our ongoing regulars often found dirty trachs or very full diapers when he relieved a particular short-termer. Determining the source of the slack care was easy.

Maybe they were spreading themselves too thin. Another short-termer not only neglected Hannah and got caught sleeping on the job, but also revealed that she was working for another agency at the same time on a different shift, and often went 36 to 48 hours without sleep.

In most of these cases, our first indication of something wrong came from Hannah’s responses. Her pulse would go up as soon as the person in question came on shift. That’s our best way of telling when she is comfortable or uncomfortable with someone.

So when her pulse dropped into near-sleep range territory during June’s visit, she clearly communicated to us: she felt safe and comfortable.

It takes time and disappointment, but it’s worth it to get a team together for whom your child is more than just a job. Hannah was hospitalized 24 times in her first four years of life, before we were able to get 24-hour nursing. In the last six years, she has only been hospitalized four times, and two of those were planned ahead of time for “regular maintenance.”

Those nurses keep her out of the hospital. They keep her alive. Most importantly, they help keep her feeling loved, something every 10-year-old ought to feel.

Saying it’s important to find the right nurse for your child is one thing; doing it is something else. Here are some insights from our successful experience in finding the right nursing team.

Donn King works with individuals and groups who want to forge top-notch communication skills to increase their influence and impact. When his daughter lets him, Donn is associate professor of speech and journalism at Pellissippi State Community College in Knoxville, Tennessee, as well as a speaker, writer, and communication coach. He has spoken to audiences, churches, and radio audiences across the United States and written numerous newspaper, magazine, and blog articles as well as a textbook. He will soon publish an ebook about what he and his family have learned from Miss Hannah. You can learn more about him and his work, as well as about Hannah, at http://donnellking.com and http://trisomykidsarespecial.com.