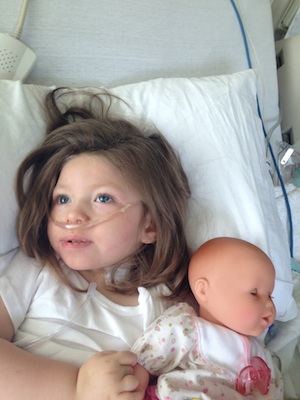 “Don’t you have home nursing?” she asked.

“You mean you’ve been doing this all yourself, for the last two and a half years?”

“Your daughter has seizures multiple times per day, is 100% dependent for all activities of daily living, is fed solely through a gastrostomy tube, you carry portable suction with you everywhere you go, and you don’t have home nursing?”

Versions of this conversation happened multiple times over. I began to wonder: who were these medical professionals that thought my child’s medical needs warranted the support of a home nurse? Had we entered the Twilight zone? Not exactly. We had, however, moved to New York.

Who Will Take Care of Her?

Soon after I came to grips with the initial shock and grief of my then two-month-old daughter Olivia’s diagnosis of Aicardi Syndrome, my thoughts soon turned to a practical question: am I qualified to care for her? If not, who is?

Within that first year and a half, Olivia’s oral motor skills declined and she received her gastrostomy tube in February 2012, and soon after a portable suction machine to help clear her secretions. Like many parents of children with complex medical needs, we were expected to learn many nursing skills with barely an hour of training.

At the time we were living in Illinois. We inquired about programs to provide caregiving support but were told that none existed for us as we made too much money to qualify. And the Medicaid waiver in Illinois is incredibly restricted, mostly just kids with trachs. Various families and medical professionals also told us that it would be nearly impossible to qualify for caregiving support through our private insurance company since the need was chronic and not acute. Dissuaded, we never tried our private insurance. Instead we found lay people who had an interest in special needs or the medical field and trained them ourselves in Olivia’s care.

Unexpectedly, we had an opportunity to move. The work location meant that we could live in one of three states. I began researching benefit programs for children with special needs to see what I could find out. Resoundingly we heard that New York was more generous than the other two. 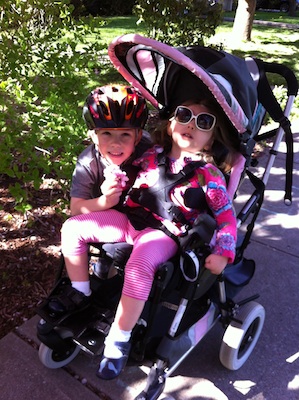 During my first transition meeting with the local Early Intervention coordinator she asked if Olivia was on the Medicaid Waiver. Without hesitation she insisted we get the application process rolling since it could take up to six months for the approval. “What if she doesn’t qualify?” I asked. “Oh she will, given the severity of her diagnosis.” “Don’t we make too much money?” I asked. Not an issue: New York does not means test for children.

While we waited for the Medicaid approval, Olivia proceeded to have her worst stretch of medical issues since her diagnosis. Medical equipment started spawning at our home. Olivia was made NPO (nothing by mouth), put on a continuous feed, put on overnight pulse oximeter monitoring, and at times required suctioning every hour and supplemental oxygen. The beeps and alarms and interventions at home, along with frequent emergency room visits and hospital stays, quadrupled. My husband and I were barely keeping our heads above water, and it seemed like the more medically needy Olivia became, the more unreasonable it was to expect her lay caregivers to learn these skills along with us.

Doctors Who “Get It”

Olivia has gotten excellent medical care throughout her lifetime. I was very happy with her Illinois doctors and rarely went for a second opinion. When we moved, it presented an opportunity to rebuild Olivia’s care team knowing what we liked best and what would be required as she grew and her needs changed. A big factor was selecting a pediatrician experienced with caring for children with complex medical needs. The pediatrician had a network of similarly devoted specialists and referred us to some great doctors. These doctors knew how to advocate for services for their patients and families.

After back-to-back admissions for respiratory distress, Olivia’s pulmonologist went to bat with our private insurance company for in-home nursing. I was convinced it would fail. She wrote an extensive letter outlining Olivia’s specific nursing needs. When the insurance company initially tried to deny it because they interpreted the letter as asking for respite care, she rewrote the letter. When the insurance company told her they needed a home care agency willing to take the case before it could be approved, she called around and found an agency. When Olivia was admitted to the hospital yet again while the decision was pending, she got the social workers involved to leverage the admission to speed the approval.

It worked. In February of this year Olivia was approved for in-home nursing through our private insurance. The approved amount is 18 hours per day, 7 days per week. This week she received her Medicaid card for New York’s Care at Home waiver program with a similar level of nursing support.

Having the support of in-home nursing has been a tremendous benefit for our whole family. It couldn’t have come at a better time. Even with home care, Olivia continues to need emergent hospital visits. The difference has been that we have been able to be discharged sooner, since the home nurses could, for example, wean her off oxygen. At times we’ve been able to avoid admission altogether. We also learned that Olivia had more nighttime needs than we realized. My husband and I tried to do the best we could at 3AM, but in all honesty she likely got less interventions and got sicker longer because we could not stay on top of the 24/7 care.

While we are grateful for the home nursing, it comes with an awareness of how arbitrary and vast the differences are from one state to another. There is no standard of care when it comes to qualifying for and quantifying the amount of home nursing. Families we know in Illinois with children very similar to Olivia’s medical profile have little to no support. Parent vigilance to their child’s needs can only go so far for so long.

Polly VanderWoude is mom to two wonderful kids, son Morgan (age 5) and daughter Olivia (almost 3). Life was pretty much going according to “plan” up until her daughter Olivia’s first seizure at age two months. Twenty-four hours later she and her husband Dan received the news that Olivia had a rare, random, genetic condition known as Aicardi Syndrome (AS). Polly received her Master’s in Healthcare Administration from the University of Michigan and is earning her PhD in “real-life” healthcare management through her experiences caring for Olivia’s increasing medical needs. She was able to balance working for a large academic medical center in Chicago but transitioned to a stay-at-home mom upon their relocation to Westchester County, NY. Someday in the future she hopes to apply her practical knowledge back into the field of improving healthcare for children with complex medical needs. To learn more about her family and their daughter Olivia’s condition, read her blog at http://oliviapaigevw.blogspot.com/