Our trach journey began in January of 2011, when our fourth child, Chance, was born. We knew there would be some complications. My 20-week ultrasound revealed that his lower jaw was extremely small, and it was determined that he most likely had Oto Palatal Digital Syndrome. Within hours of his birth it was determined that he would need a trach. His lower jaw was positioned so far back that his tongue kept flopping back, blocking his airway. Surgery was not an option yet as his jaw needed time to grow. 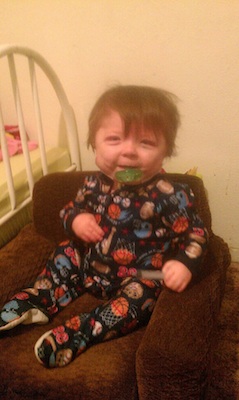 OPD is a rare genetic disease that affects the hearing, the palate, and the fingers and/or toes. The small mandible is also a common characteristic of the disorder. It is a spectrum disorder and for some reason affects males worse than females. I have OPD, and my six-year-old daughter has it as well. My case is mild, my daughter’s was moderate, and Chance’s was severe, although we would not know how severe until he arrived.

We weren’t novices at having a special needs child. My daughter has a feeding tube and was diagnosed with autism before the age of three. The trach, however, was a whole new ballgame and a very scary prospect. Within a few days, however, the trach became the least of our problems.

When Chance was four days old, he went into acute respiratory failure and had to be placed on an ECMO bypass machine as a last resort attempt to save his life. He was retaining carbon dioxide and no one could figure out why. The ECMO machine would let his lungs and heart rest, and hopefully heal. There are no words that can accurately describe what that week was like, and what seeing your baby hooked up to life support does to you. We operated on autopilot for almost a week, hoping for the best, but preparing for the worst. Each day was an emotional roller coaster. Finally, we got the good news that his blood gas tests were coming back within normal limits, and he was taken off the ECMO machine. He would spend the next four months in the NICU. During that time he contracted a staph infection in his lung and began to have multiple feeding issues. In April, he had a feeding tube placed, and in May we were finally able to bring him home.

Our living room resembled a small hospital room with all of his equipment. Along with the feeding pump and G tube supplies, we had a humidifier, a pulse oximeter, a suction machine, and boxes of trach supplies. It was a little overwhelming. The humidifier was extremely loud, and the pulse oximeter came loose when he wiggled and set off the alarm, which caused more mini heart attacks than I’d like to remember. Going anywhere with him was a challenge. Going anywhere with small children can prove difficult, but going anywhere with a baby who has a trach is a major ordeal. Aside from all the medical equipment and emergency bag that must go everywhere he goes, there had to be two adults in the car with him when we went anywhere; one to drive and one to suction as needed. For the first year or so of his life, the only time we took him anywhere was to doctors’ appointments.

Another huge adjustment we had to make was having home health nursing. We had been approved for enough shifts to have someone during the day and overnight seven days a week, but we opted for five. It was very strange having someone else in the house with us for that amount of time, especially someone we didn’t know that well. At first I actually resented the idea that the hospital thought we needed it; like they thought I was incapable of taking care of my own baby. How wrong I was! Nursing turned out to be a lifesaver. The benefits of getting a decent night’s seep far outweighed the weirdness of having a virtual stranger sitting in your living room when you wake up at 2am to go to the bathroom.

Illness has always been a nerve-racking issue. We have three older kids, all in school, who seem to bring home every virus that comes around. Since he was discharged from the NICU, he has been hospitalized three times for respiratory ailments, which I am told is not bad for a baby with a trach, as they are always more susceptible to whatever is going around. We have been very lucky, but it is still very scary and stressful when he does become sick, as he can go from bad to worse in no time.

His care has gotten both easier and harder at the same time. We are way more confident and experienced than we were two years ago, and trach changes and suctioning are second nature to us now. But it is harder in that he is a squirmy two-year-old who does not like to sit still. Everything from trach care to diaper changes can turn into a wresting match, and trach changes now require three people instead of two because he jerks around so violently. The same goes for his breathing treatments. What used to be an easy task has turned into what must look like torture to an outsider. We need one person to attach the adaptor for the IPV/nebulizer to his trach and stabilize it, and another to hold his hands so he can’t grab and pull at the adaptor.

As time went by, life was still crazy, but it became easier as we settled into a routine. The medical equipment became part of the furniture, and even the humidifier became white noise after awhile. Aside from some initial jealousy and a few time outs for messing with medical equipment, our older kids adjusted quite well to their new brother and accepted him lovingly from the time he first came home.

Even today my two other boys will fight over who gets to play with him or hold him.

A New Kind of Life

Having a child who is medically fragile can be isolating. Not only do we have to be careful when we go out, but in our case, there are very few people that we can relate to. There aren’t that many kids with trachs locally, but I have found several kindred spirits through the internet. These are people who deal with the same issues that we face every day, who know what I’m talking about when I ask about granuolmas in the stoma or who feel my pain when I freak out because Chance has started yanking on his trach when he gets upset. They may not know it, but they have been a port in the storm on many occasions.

The last two years have had a profound affect on everyone in the family. As chaotic and stressful as life can get, we are constantly reminded that we have so much to be thankful for. Chance is now a toddler and acting like a typical two-year-old most of the time. He is still delayed in speech, because he refuses to wear the speaking valve that fits over his trach. It’s a struggle that we continue to work on, but for right now he is doing some sign language and seems to always figure out how to get his needs met and his point across!

Life as we know it has forever changed. We tend not to sweat the small stuff anymore, and as is typical in a crisis, we have come to know who we can really trust. I’ve come to learn that in a situation like ours, the people in your life often go into “fight or flight” mode. Those that can’t handle it suddenly seem to fall off the face of the earth, and those who can handle it are those that truly get it. They get why you can’t be spontaneous and why you are tired all the time and why phone calls sometimes go unreturned. They get it, and they don’t hold it against you. Regarding the people who suddenly distance themselves, I’ve learned to let them go because if they can’t handle what goes on in our life, our life is better off without them.

I’m sure there are many people out there who would look at our situation and see it as being a burden, but I refuse to see it that way. Our kids are here for a reason, and they inspire us daily. They struggle everyday to do what comes so easily to others, and most of the time, they don’t complain. We do have our bad days, but the rewards of the good days far outweigh them. It is our privilege to be the parents of these kids, and it is our duty to advocate for them, and we will continue to do so until they can do it for themselves.

Jennifer Arnold lives in Northern CA. She is a full time mom and wife who loves to write, to curl up with a good book, experiment in the kitchen, and consume lots of coffee and chocolate. She is also a part time student working towards a degree in respiratory therapy.