Our Journey with Neuromuscular Scoliosis

We started thinking about scoliosis approximately ten years before it became a surgical issue for our daughter. We went to twice a year appointments with the “best” orthopedist, the one everyone says is the best scoliosis surgeon around. We went through hip surgery with said orthopedist (“will this affect her back?” we asked him). Then there were the monthly back checks by the physical therapist, and seating and positioning checks of her wheelchair. All with the sole purpose of putting off surgery. We dared not hope to avoid it entirely.

Scoliosis in Children with Neuromuscular Conditions 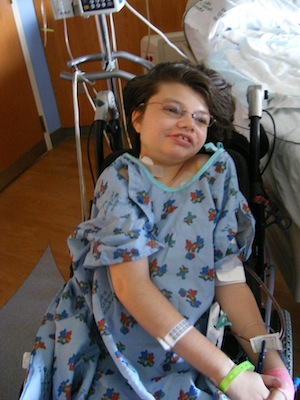 The reason for our early vigilance is because children with neuromuscular diseases like cerebral palsy, muscular dystrophy, or Rett syndrome are much more prone to developing scoliosis than the general population. Things started very gradually with a little lean, which could be remedied by some good stretching. Later, a small curve was noted on X-ray that didn’t disappear with stretching or positioning. She was eleven years old before “the curve” became something we started talking about as a real thing. Instead of just watching to see IF it would show up, it was here and needed to be watched more closely.

By her 14th birthday, in the fall, the curve was getting much more noticeable, but it wasn’t severe enough to require surgery yet. Most noticeable was that her head was not quite setting on the headrest of her wheelchair.

Our orthopedist does not recommend bracing for neuromuscular scoliosis. We were glad he didn’t, as I could not imagine bracing with everything else. In his opinion (and much research I did on my own), bracing is ineffective in this type of scoliosis. If she had been younger when the curve started progressing, I probably would have considered bracing. We were lucky; she was a teen before it got concerning.

By our spring orthopedist appointment the curve was much worse. Now it was surgical, which means the curve increased to over 50 degrees. Her head wasn’t even on the headrest of her wheelchair any longer; it was hitting the metal push handles. Moving the headrest kept her head from becoming injured from constant bumping on the handles, but it sure made her chair look odd, as it was at such a strange angle.

We scheduled surgery, but had to wait months for a date. Between getting insurance preapproval and getting on the surgeon’s schedule, it was a long four months. I’m sure if we had chosen a less well-known surgeon, someone less busy, we could have gotten it done sooner. We wanted to be sure we had an experienced surgeon who specialized in scoliosis.

I had read many horror stories of scoliosis surgery, how long it lasts, how long the hospital stay is, the awful recovery. I am happy to say that, for the most part, she breezed through this surgery. 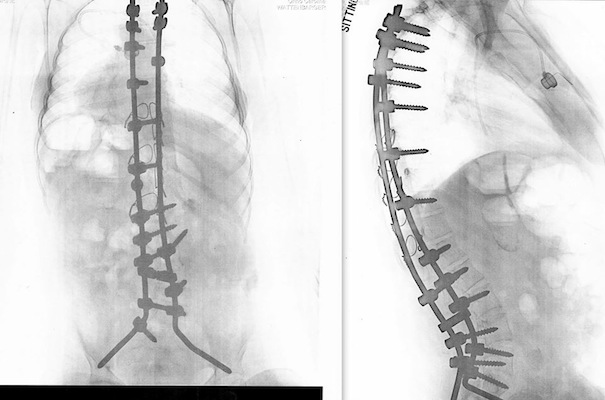 Typically, the spine is fused using real or artificial bone grafts. This allows the spine to eventually harden into one long fixed “bone.” In order to keep the newly fused spine in place, rods are typically placed alongside the spine, fastened by screws and hooks. How much of the spine is fused depends on the child’s needs. Technically, you can fuse from the cervical (neck) vertebrae all the way down to the pelvis. In discussing the surgery, our surgeon recommended that the hardware continue down into her pelvis. Since she uses a wheelchair exclusively, this would provide support and stability. I trusted my choice of doctor and went along with his recommendations.

For my daughter, surgery time was less than we were told to expect, which was between four and 12 hours. Though we had been told to expect her to be on a ventilator after surgery, she was off by the time she got to recovery. The worst part was the bed. Yes, the bed. This was the only time in our many hospital stays that she got one with a bad wheel, like a bad cart at the grocery store. Rolling from recovery to PICU was excruciating as that wheel bumped along. We considered moving her to another bed, but determined that would be more painful for her.

The first 24 hours of recovery were about what was expected, aside from not needing the vent. She did spike a fever overnight, and I awoke to find her surrounded by ice packs. But that subsided, and by morning she was doing better. By the middle of the day physical therapy arrived and said they had to get her up, the sooner the better. 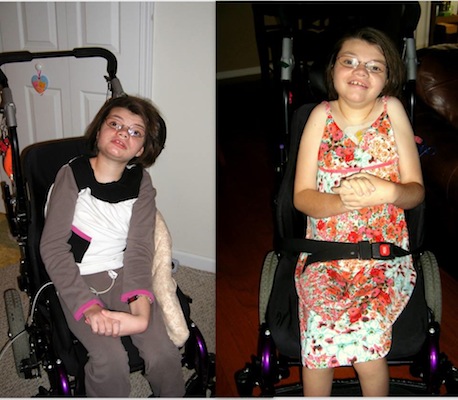 Before (left) and after

We ensured that she had recent pain meds, and got her up into her chair. It went amazingly well, and she even kind of smiled! Getting her into and out of the chair became much easier once we removed all side supports, arm rests, and laterals on the seat to keep her legs in. The new way to lift her while keeping her back stable meant almost sliding her in from the side. We were in the hospital hallway with tools taking parts off the chair before we needed to move her again.

The only thing I wish we had pushed harder on was beginning chest PT within 24 hours of surgery. A group I am in specific to my daughter’s diagnosis had recommended it. It was even in their written guidelines for scoliosis surgery, which I shared with the doctor. Unfortunately, the hospital was unable or unwilling to support this “extra” service, until my daughter developed post-surgical pneumonia. She had been ready to go home at four days post surgery, until the pneumonia hit, giving us an extra four days inpatient.

The whole scoliosis experience was much better than I had imagined it would be. I had expected much more ICU time, to have my daughter be on a vent for a while, and much more pain. I was also told the surgeon would not be able to fully correct the curve. While her back may not be fully straight, it is only noticeable in that her head is not quite centered on the headrest (which is back to the middle now) on her chair.

The only negative that we experienced with this surgery that we did not expect was that with the hardware continuing down into her pelvis, her ability to lean forward in her chair, something she would do when she was excited, is gone. While I miss that ability of hers, I do not miss the huge C curve, which must have caused a great deal of discomfort for her.