I have a dirty little secret. Okay, secret is probably the wrong word. What I’m referring to is more like an alter ego. A secret life. A life spent in the relentless pursuit of one thing: a perfect poop. 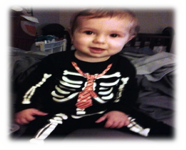 Now obviously poop is not a secret as much as it’s simply a subject most people would rather not talk about–a taboo topic, if you will. Well, what do you do when an obscene amount of your time is spent analyzing the unattractive facts of life? You write about them, of course.

So here it is, plain and simple: I am a poop expert. And today is your lucky day, because I am going to take you through the magic poop portal and into the world of my son, Bennett. My hope is that in sharing my experience, perhaps I can help ease the anxiety of another scared parent, as well as demonstrate to others how heroic our kids can be, even if you never witness their fight.

Imperforate Anus is a type of Anorectal Malformation (ARM) that affects 1 in 5,000 births and occurs during approximately the fifth to seventh weeks of gestation; its cause is unknown.¹ The degree of severity of Imperforate Anus varies greatly from child to child, and there are numerous scenarios of how the anatomy can form, leading to a wide range of malformations. Imperforate Anus is generally categorized into two sub groups: high IA and low IA.

Put very simply, high IA occurs when the rectum ends higher in the abdominal cavity than is normal. Children with this type of defect generally have a harder time gaining bowel control and often are given a colostomy shortly after birth, which is later reversed once corrective surgery has taken place. Children with low IA typically have a rectum that extends very close to the perineum wall, can more often have corrective surgery soon after birth, and generally gain good bowel control.

Thankfully, we were fortunate enough to find that Bennett has no VACTERL associations, other than a very slight heart murmur and low IA. In fact, the exact words of his surgeon at the time of his initial corrective surgery (at three days old) was that short of not having it all, Bennett’s type of defect was what he considered the best case scenario. So here he is: my “best-case scenario” baby. Cute, right? Why, thank you.

And now that you have a basic understanding of what IA is, I’d like to tell you about what the “best-case scenario” of IA does.

When kids with IA have corrective surgery (Anoplasty), the doctor forms an anus from the tissues already there and connects the rectum to this new anus. Because the doctors are essentially making a hole where there was none, the skin/tissue will naturally tighten as it heals, the same as it would with any other cut/wound. However, because this wound is circular in nature, as it heals, there’s a tendency for the hole to close (think earring holes). To prevent this, parents are given metal dilators that are used to keep the hole open and functional. Yes, this means we insert the dilator into the anus twice daily. The girth of the dilators is increased over time until the hole is the appropriate size for the child’s age and is no longer threatening to close.

I’m not going to lie—this is an altogether unpleasant experience, and one that requires at least four hands. It is also very, very important. I will admit I was not a fan of this particular treatment and was tempted to let the dilations slide from time to time (no mother wants to feel like she’s hurting her baby), but I was always reminded of their importance. For example, when Bennett was only six weeks old, we saw his pediatrician. While getting vitals before the appointment, a well-meaning nurse took a rectal temperature (using the tiny tip of the thermometer—and you know how small those are) and caused quite a bit of trauma. And so I became a diligent dilator.

Still, when I was told that Bennett’s defect was of the mildest sort, I accepted these dilations as a harsh, yet temporary reality that would lead to making my baby all better. I was wrong. I was totally, woefully wrong. The truth is that there is no “all better” with IA, not even in the best case scenario. I don’t say this in an attempt to intimidate new parents, but rather because I have learned through my own experience that the sooner a parent accepts this, the sooner he/she will be able to not only absorb what doctors say, but understand and appreciate it.

When doctors, nurses, friends, or the lactating populous in general tell you that breast milk is best for your baby, they know what they’re talking about! Even with the smallest anus, breast milk will find its way out of your baby. For kids with Imperforate Anus, this is a very, very good thing. I say this because one of the main complications of IA, post-operatively, is constipation.

Now, I’m not talking about the kind of constipation that you’re probably thinking of. While it’s true that just about everyone will experience an episode or two of constipation within his/her lifetime, the constipation IA kids deal with is far, far worse. Once solid foods such as cereal and strained baby foods are introduced into the diet of a baby with IA, things (and by things I mean poop) can come to a screeching halt. It’s cute when kids strain and you can just see them stop what they’re doing to concentrate on having a bowel movement, isn’t it? Not for an IA kid. I can’t tell you how many times I’ve been pushing Bennett around the mall or grocery store only to have him begin straining, except constipation is such a problem that his straining is more alarming than it is entertaining. He struggles so hard to have a bowel movement that his face literally turns purple and he screams in pain, yet still gets nothing out.

When he’s unable to have a bowel movement, his belly swells and becomes so distended that often his shirts no longer fit. In the six months since Bennett had solids added to his diet, he has been hospitalized for fecal impactions five times. His surgeon, at a loss as to what is causing such severe constipation, has tried laxatives, stimulants, and enemas to keep him clear, and finally had to take him back to the operating room to manually clean him out under general anesthesia. He’s now on daily laxatives, stimulants, enemas, dilations as needed (to stimulate the bowel to push out), and a high fiber diet. I’ve also learned to use tracer foods (like corn) to monitor how well he’s passing stool through his system. As a result, I have become adept at reading poop. I know what the colors mean, how it should smell, how long it should take before I see a particular food reappear, and what every spot on the consistency spectrum indicates.

So, yes, constipation for an IA child is life altering, but then so is diarrhea. Often, the two are coexisting. It is not uncommon to see a child with diarrhea straining to have a bowel movement. This may actually indicate a blockage is present. The blockage exists, so everything that comes in behind it either adds to the impaction, or simply seeps around it, much like water will do in a clogged drain. The result is that there is a constant flow of poop, but no relief for the child. In addition, for babies with IA, the constant flow of poop eats away at the baby’s skin, creating extremely painful, bleeding sores.

It’s also been my experience that everything affects Bennett’s bowels. Something as simple as a common cold or getting vaccinations, as well as situations which would irritate most people’s bowels (like taking antibiotics), causes extreme diarrhea. For example, not long ago I took Bennett for a walk around the mall in his stroller. He had a runny nose, but seemed otherwise happy and healthy. Imagine my surprise when as I was pushing him around I started noticing people looking at him oddly. When I came around the stroller to look at him from the front, I noticed he was sitting in a large pile of poop which had evidently oozed out of his diaper with no effort or recognition on his part whatsoever. Gross? Yes. Embarrassing? Absolutely. The point, though, is that kids with IA easily go from one extreme to the other with very little in between. Knowing how to read what’s coming (or not coming) out is just as important as watching what goes in.

When I first learned that Bennett had an Imperforate Anus, I was heartbroken, stunned, and worried all at precisely the same time. Very rarely is Imperforate Anus detected before birth, so when it is diagnosed (usually when you’re in the delivery room waiting to meet the sweet, sweet baby you’ve been waiting on for months), it’s a hard pill to swallow.

But, for me, what has been so much worse is the element of the unknown. No two cases of IA are exactly alike and doctors have a hard time predicting what the prognosis for any given child will be. It’s frustrating, to say the least. It’s even more frustrating trying to make employers, teachers, friends, and even family understand the delicacy of a child who appears completely healthy.

Even with these frustrations, though, it’s important to keep in mind how very fortunate we are. Imperforate Anus, particularly high IA, was often treated unsuccessfully in the past. Today, however, there are some really phenomenal surgeons treating our kids. These kids will grow up, they will have families, they will have jobs, and they will be okay. And so will you.

So, when you begin feeling the weight of the complexities of your child’s condition bearing down, reach out to the many, many support groups for parents of IA kids. You’ll find there’s a lot of relief in shared stories of a perfect poop.