This is our story about oral aversion, tube feeding and blending real foods. This is what has worked for our family, based on my own research and opinions.

From the day he was born, my sweet boy Chase had a hard time eating…he just never quite got it. It didn’t matter if it was a boob, bottle or spoon—he was not interested. At about 10 days old and losing weight quickly due to lack of food volume and burning increased energy trying to eat, it was getting concerning. It was time to place an NG tube, a tube that goes down the nose into the stomach. Formula or breastmilk would flow through a pump into his tummy at one ounce per hour, 24 hours per day. 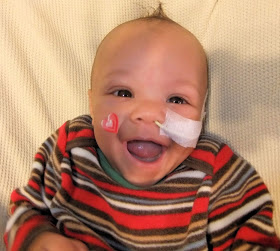 He received constant nourishment, but vomited most of it. It was a vicious cycle, battling doctors and debating with therapists. Needless to say, having a tube down the back of your throat and excessive vomiting did not help the oral aversion—it made it worse. I would attempt to give him a bottle during the day and he would scream/twitch/turn his head in refusal. The goal was survival and calories, and the feeding tube won.

First, I thought it was my overly engorged breast and latching issues. We tried all positions, Lactation Gurus, attachments, you name it, and there was no change. Then we switched to bottles, tried every nipple, temperature, and holding position with no change. I purchased every invention imaginable to help increase his oral skills—Nuk Brush, Boon Spoon, Chewy Tube, Mesh Rattle, fancy straws, Honey Bear Cup, Nosie Cup, and many, many more. I guess it was just wishful thinking, that the right tool would change his mind.

Maybe it was the comments from family and friends, such as, “Is he eating YET?” or, “Have you tried green beans, mac and cheese?” “Did you burp him first,” or, “You just having found anything he likes to eat!” And, “Don’t worry, he will just grow out of it!”

Then, I thought it was my fault. So, I let someone else feed him, and again no change.

It was time to get help.

We started with our Early Intervention program when he was four months old. Chase had an OT (occupational therapist) and an SLP (speech therapist). OT provides assistance with daily living skills, like eating and working on textures. Speech therapists work on the function of the mouth, swallowing and of course speech. Speech is greatly impacted by oral aversion/delayed eating. If you don’t learn to use these muscles when eating, using them to make sound is very challenging.

I remember having an SLP who would strap Chase in his high chair when he was barely six months old and turn on a timer. She would shovel baby food in this mouth until the timer went off five minutes later. He was crying, I was crying, he would start vomiting, and she was fired. I really didn’t know any better, but was looking for someone who had the right answer.

Over time, we found out through numerous swallow studies that he had mechanical issues with swallowing. A video swallow study watches the food (or in Chase’s case, liquid) go through a complete swallow cycle. Unfortunately, most of our studies were limited, due to Chase’s lack of interest in swallowing ANYTHING. But, we did find that he had a delayed swallow, aspirated fluid into his airway, and had pooling. Basically, swallowing was difficult from day one and it still is. He “wants” to eat, but it is a challenge. For me, it’s like a child who has paralysis and wants to walk, but it just doesn’t work.

We have accommodated Chase and cheered him on along the way. He has made great strides and I will share some of the tips that have proven successful!

At nine months, after consistently torturing my son with sticking a tube down his nose, I finally convinced the doctors to move forward with a G tube, a more permanent option that is a tube directly into his stomach. I change this tube every three months. I think it looks like the valve on a beach ball: we open it, use a connector and insert his food. It is out of sight, it is easier to manage, and better yet, he can’t pull it out as easily. 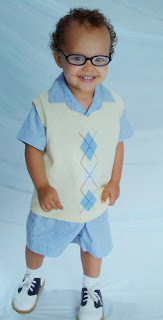 After treading through the first 18 months with the vomiting and refusal, I decided it was time to make big changes. Personally, all of these changes were made by my own investigation and trial and error. I have found a couple of good providers or therapists. But, in general, I found that they didn’t care if he vomited, ate or was on a feeding tube the rest of his life. I have gone to four major hospitals and their pediatric feeding clinics, and not one had an answer. I spent countless hours on the highway, nights in various Ronald McDonald Houses and all I was left with was a new chewy tube.

I took matters in my own hands. Blending real food was NOT suggested and was actually discouraged. They wanted us to stick to formula and move to a GJ tube directly into the intestine. I was not going to settle for a more invasive tube. I had a plan for my son to move forward, not backward. I was going to constantly strive and never settle. I put my foot down and started making small changes, with or without professional approval.

The first thing I did was call our DME and say, “The feeding pump and pole are ready to be picked up.” I hated this equipment, my baby was getting tangled around it and the beeping ran my life. I decided to go to a bolus feeding schedule. This method uses a syringe and tubing, and instead of a feeding pump pushing the meal through, the parent does it manually. I put Chase on my kitchen counter and do his feeds. We feed, break for 15 minutes and feed again. He eats three times per day (10 ounces each time) and gets two or three water boluses. Chase likes water out of a straw cup; he does this with caution and sometimes uses a thickener.

Then I started to blend real foods and put them through his feeding tube. It is a lot of work, but I will never, ever have anyone talk me into giving my child nourishment out of a can again! On formula he was fragile, vomiting and miserable. We tried about 10 different kinds of formula, including elemental formula, with the same reaction. Immediately after starting a blended diet we began noticing improvement. Then when I eliminated dairy and gluten, he completely stopped vomiting and started to grow! Most noticeable, his hair, skin and nails looked much healthier!

There are a few tools that have really helped along the way. These include:

Regardless of your child’s age, when a child is orally adverse it is suggested you start from the beginning. Think babyfood for a six-month-old. Unfortunately, we are not there yet. We are still working on very small bites of Jell-O. We are working on tastes and miniature “sprinkle-size” bites that dissolve. I do not count calories from oral eating; he gets enough through his tube.

Due to Chase’s small stature, we are not able to reduce tube feedings at this point to encourage hunger, which is another school of thought. I keep this info in my back pocket and as he gains more weight, I will try decreasing feedings!

In the beginning we used novelty flavors to stimulate him to eat. Some families focused on feeding naturally may not be comfortable with this, but I was desperate to get my son to eat, and I was willing to start with anything. The focus is BIG flavor that is dissolvable. These include:

Some things that did not work for him were raisins, peas, or anything small and round that would cause gagging and frighten him. Some kids do well with strange liquids like coconut milk or unusual juices, but Chase did not care for them.

Our first goal was moving the tongue around simple, small items. Chewing and swallowing complicated textures will come later, and that will be our biggest challenge.

Prior to getting his tube feed, Chase is offered food at the table. He is required to taste his food, and it is great if he takes a couple small bites. While getting his feeding, a 10ml syringe or medicine cup is filled with his tubefeeding blend. He drinks the blend while I am completing his feed. It is extremely important for children to attach the idea that eating orally makes them full. You do not want your child to think that the only time he gets full is through a feeding tube.

A Work in Progress

Well, Chase is embarking on his third birthday and we are still relying on the G tube. My boy is active, healthy and thriving. His weight is climbing, and tube feeding is a huge part of our life. The tube and I have a love/hate relationship. I am so very grateful for it, and for my baby! It is a lot of work and I feel like I live in the kitchen. Traveling is tough and our life revolves around a feeding schedule. But, I have found something that works for us. I am grateful of the technology to allow my son to have a tube to provide him nourishment and I will continue to encourage his appetite and ability to enjoy food!

Stacey Anderson is a proud thirty-something mom of a chubby Chihuahua, Olive, and two boys—Trent Nathaniel (13) and Chase Allen (3). She embraces her life as a solo parent, after life took an unexpected turn in 2010 when Chase was born with special needs. Besides having a fondness for small coffee shops and thrift stores, Stacey adores writing. She shares her journey and new found strength through online articles, her blog Solo with Stacey, and most recently as a contributing writer in Monday Coffee and Other Stories. Her passion is to encourage change as a Disability Advocate for the state of Missouri.