Only new parents can relate to that feeling you get when you are first able to hold your newborn baby…that amazing wonder you see in your child’s eyes as she looks at you, and the relief that after ninths months you have a beautiful and healthy child. I was robbed of these emotions when I first held my daughter Leah. Instead, I felt my heart racing as the panic gripped my body, and the wild thoughts and fears raced through my head. 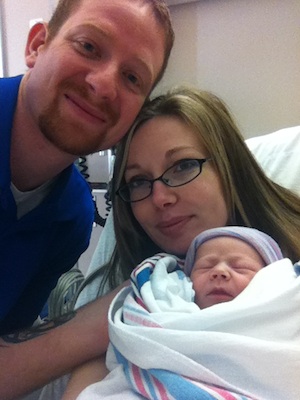 The minute I held my daughter Leah I knew that something was wrong. She had a mass, dark purple and gruesome, protruding out the backside of her delicate neck. As I continued examining her small body, I counted her fingers and toes, realizing that her middle fingers and hands were much larger than the rest of those tiny limbs. Her fingers were so large that they would bow as she stretched her hands, and her palms were rough, with much more tissue than normal. I spent that precious night with my baby sleeping on my chest, and my husband at my side, not knowing I would not be able to hold my little girl again for a week.

The next morning, Leah was ambulanced to a specialty hospital a three-hour drive from where we were, after the doctors discovered a harsh heart murmur. In combination with her other symptoms, she was admitted to the Neonatal Intensive Care Unit. The next week, at the time, was the longest of my life as I just wanted my baby and to go home. In retrospect, it’s a blur. I was lost. I was confused. I didn’t know what her symptoms meant, or what her condition might be. I didn’t know whether it was merely a birth defect, or something much more severe. The questions and thoughts during this week stemmed more out of fear of the unknown than anything else. I could handle something I knew, but how could I handle something I’d never heard of?

By the end of the first week, Leah was showing signs of being healthy enough for release. Her heart murmur stabilized, she was eating great, she was reactive, and we were told she could go home. The diagnosis we left with, however, led to a maze of contradicting “impressions,” medical terminology that might as well have been a different language, from multiple medical teams in multiple specialties around the country.

Leah’s initial diagnosis was Proteus Syndrome, which is a very rare condition associated with overgrowth of the skin, bones, and tissue. After researching this condition, and seeing the physical and medical effects, we were crushed. I immediately contacted the NIH, as they are one of the few institutes that deal with this condition. Her medical file was reviewed, and she was accepted into a research opportunity for overgrowth disorders. The NIH’s impression after reviewing her case was that her diagnosis did not meet the criteria for Proteus syndrome, but might lie on the spectrum of Cloves Syndrome. 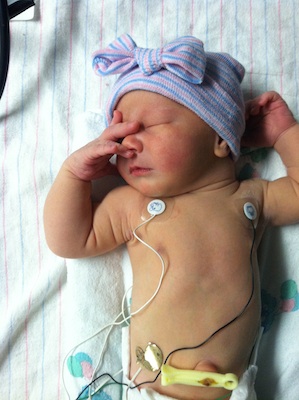 I went back to my research, contacted the Cloves Syndrome Community (an amazing group that I am now a fervent advocate of regardless of my daughter’s condition), and contacted Boston Children’s Hospital, as they are one of the leaders in vascular anomalies and discovered the Cloves Syndrome genetic mutation. After a team of specialists in Boston reviewed her case, they were unable to make a diagnosis at that time, but had the impression she may have macrodactyly, a rare condition causing either fingers or toes to be abnormally large due to the overgrowth of the bone and tissue. 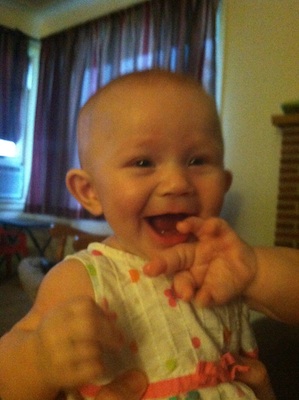 As of now, my daughter has had four contradicting diagnoses by the top overgrowth specialists in the country. At this point, I felt I had hit a dead end. All overgrowth conditions present themselves with symptoms that are unique to the person. The name on the condition doesn’t mean as much to me as knowing what to expect, what to look for, how it can affect her medically. Do I look for lipomas, which are common in many of these overgrowth disorders? Do I look for bone distortion? Do I look for malignancies? We just don’t know what to expect, which has made my husband and me hypersensitive to every little hiccup or bump.

The NIH research program is an amazing opportunity as they had just opened it up to overgrowth syndromes outside of Proteus Syndrome. For Leah, this has meant a skin biopsy, which will be cultured so that the geneticists and medical teams can look into her genes further to try and see where her specific genetic mutation occurred. With this, we are hoping for more answers.

There is no cure for overgrowth conditions. To date, the only option is treating the symptoms as they occur. Leah is involved in occupational therapy on a regular basis to improve the mobility of her hands. She has monthly X-rays to track the growth of bone and tissue development. She has ultrasounds quarterly to monitor her kidneys. Her regular doctors include a pediatric surgeon to monitor her lymphatic malformation (from a mass in her throat), an orthopedic surgeon as it has been suggested to remove her affected fingers, her regular primary care giver, geneticists, and multiple medical teams.

Emotionally, the changes have been just as drastic to our lives. I just recently had my first experience where others stared, made comments, and pointed at her for being different. I had taken my two-year-old son to preschool and the children there, only being three years of age, were perceptive enough to notice she was different. One child walked up and said, “Her hands are big, mommy, look at how big her hands are!” The mother of this child then stared. I was a little shell shocked, not knowing how to respond. The next incident, however, I was prepared. When one of my son’s classmates said, “She’s pointing at me!” I knew that of course, she was not, and that the little girl only thought this because her middle fingers are so much larger than the others and that’s how it appears. I told the little girl, “She’s not pointing, honey. Her fingers are bigger. That’s how she was born. Everyone is born different, you have brown hair, but she has red. You have freckles, and he does not. Everyone is different and special, and Leah is different and special because her hands are bigger.”

I know this will be an issue that will arise again. At some point, Leah will be old enough for the stares to affect her. One of my biggest fears as a parent is that she will grow up thinking she isn’t beautiful…when I know that she is.

Children are strong, stronger than they are often given credit for. I can see this in Leah and in how she has adapted to her larger limbs. The milestones are extra special. I didn’t know if she would be able to hold things, or sit. I did not know if she would be affected developmentally. There are still some things I don’t know if she will be able to do. But right now, she rolls, she crawls, she has a smile that can light the darkest of rooms, she coos and talks. The future may remain unknown, but for today, she is a typical six-month-old baby with exceptional obstacles that I have no doubt she will be able to overcome. We will deal with each of the obstacles, medical, physical, emotional, as they come, because in situations such as this, it’s the only thing you can do.

Having a child with an unknown condition is like walking into a dark tunnel with a blindfold on. You stumble, you fall, and you don’t know which direction to go. The support of my friends and family has been invaluable. It’s meant more to me than they can imagine. Awareness is key now. If it weren’t for families before me, sharing their stories, I would not have had a direction to go. Because of this, I can share her story.

For me, fear of the unknown is the hardest part. The support I’ve gotten through friends, families, coworkers, siblings, my husband, and the amazing members of the Cloves Syndrome Community has given me hope. The specialists and many doctors Leah has seen have all been amazing. We may not yet have a diagnosis to date, we may not get one for some time, but we will take each day as it comes and appreciate the little things that many take for granted.

My motivation, my light in the dark tunnel, is my children. Both of them. It’s that simple. This specific journey, however, into unknown territory…Leah makes this journey worth it.