Our Life with Wheels: The Freedom of Mobility

My 4-year-old son, Spencer, has Say Barber Biesecker Young-Simpson Syndrome. Due to his condition, he has mild joint contractures and hypotonia, both of which have limited his mobility. He didn’t sit up until 14 months. He didn’t start crawling until at least 18 months. He didn’t take his solo first steps until recently and still will only take a few steps at a time. While we have always been thankful that Spencer can get around on his own, we knew the time would eventually come that he would need a wheelchair. 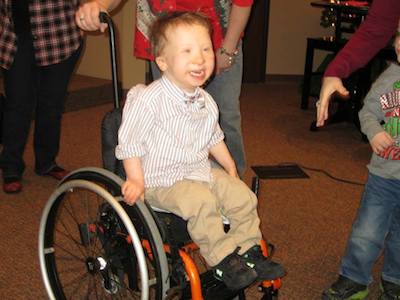 We put off getting Spencer a chair as long as we could. One of our family philosophies is that we try to keep as much medical equipment out of Spencer’s life as possible. We like to try to accommodate Spencer’s needs by using typical items creatively. Since he is a smaller guy, he can still fit comfortably in a regular stroller, even now. We also know that in our state, Medicaid will only pay for a new wheelchair or special needs stroller once every five years. We didn’t want to get him anything too young in case his needs changed as he got bigger.

We ended up getting Spencer a wheelchair when he was getting ready to start preschool. We knew that he would need a safe way to make transitions while at school and to potentially take the bus. Knowing that his chair could take several months to get back, we made him an appointment to get evaluated for a chair a few months before his third birthday, which was around nine months before he would start school.

The wheelchair evaluation was exciting yet emotional. It is a harsh realization that your child needs a wheelchair, and that didn’t really hit me until we were waiting in the wheelchair clinic. However, I was quickly put at ease. At the appointment, we met with a physical therapist and the hospital’s wheelchair specialist. They asked me about Spencer’s abilities and what we thought he could handle as far as mobility independence. We then discussed the different types of wheelchairs that they thought would work well for him. After we chose a model (the Tilite Twist), we then discussed features such as brakes, seats, and parent handles. Finally, we chose a kid friendly color (Orange) and he was measured.

Spencer’s chair came back way faster than we imagined, shortly after his third birthday. I was worried that he would freak out about being in it because it was so different than his stroller, but he loved it. The first trip we took out in public was at a local grocery store. As we were browsing, I became aware that everyone was staring at us. Spencer has gotten many stares and looks over the years, but after so long you don’t really notice. However, the wheelchair absolutely screams to society that my child is disabled, and it was a different type of staring that we weren’t used to.

We quickly fell in love with Spencer’s chair. It really took him from being a baby to being a big kid. He loved being guided around in it, and he enjoyed his new perspective of the world. It took some time, but he has also learned how to maneuver it on his own. His chair has given him an opportunity to explore the world in a safe way. The chair has quickly become part of our family and we are grateful for it. He also feels like his chair is a safe place, and it has become a useful tool for when the world gets overwhelming.

Spencer’s chair has given him celebrity status at school. He is the only kid at school with wheels, and the other kids think he is cool because he gets to roll. I was really concerned that Spencer, due to multiple delays, would have a hard time making friends when he started school. However, Spencer’s chair brings him a lot of positive attention and everyone knows him. They don’t see the chair as a symbol of disability, but as an awesome accessory.

While the world may see a wheelchair as a symbol of disability, our family sees it as a symbol of freedom. Spencer’s chair, this giant hunk of metal and rubber, has given Spencer something that his legs haven’t been able to yet–independence.

Society can go ahead and stare at my child in his wheelchair—all they’re going to see is the big, goofy grin on my kid’s face.

Rachel and Spencer Nichols live in Ashland, KY.  You can follow their journey on their blog, Joining the Clubbed Foot Club:  And Other Spencer Related Adventures.