This is going to be Spencer’s last Feeding Tube Awareness Week as a “tubie.” He has worked really hard and we are expecting his feeding tube to be removed this spring or early summer. I am often asked how we weaned Spencer off his feeding tube. We didn’t do an inpatient feeding program or employ the help of expensive, unrealistic, online “experts.” Spencer has essentially weaned himself from his feeding tube, in his own time, when he was ready. 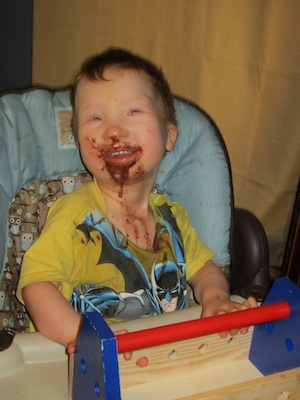 One fundamental thing you must know about Spencer before you read any further is that for him to do anything, it has to be his idea. He is incredibly stubborn and is not easily persuaded. I have never, nor will I ever, force Spencer to do anything. However, I will challenge him to do things. Either he’ll throw a fit and I’ll back off, or he’ll do it.

We knew Spencer would someday eat orally, but he would do it at his own pace. We have never felt pressured to get rid of his tube until he was truly ready. We have never made a big deal out of Spencer not eating and never really stressed out over it. His feeding tube has been our normal for nearly four years, and losing our dependency on it has been liberating, yet terrifying.

Why Spencer has a Feeding Tube

Spencer is a “tubie” because of complications from Say Barber Biesecker Syndrome and Pierre Robin Sequence. He was born with craniofacial muscle weakness, a small jaw, a cleft palate, and laryngo-tracheo-bronchomalacia. He never quite figured out how to breath, suck, and swallow at the same time, so he received an NG tube at one day old and his G tube at one month. We chose to do a G tube because we felt it was going to take him some time to learn how to eat. I believe getting his G tube was the best medical decision his father and I have ever made. Shortly after being released from the NICU, his very limited eating skills completely regressed, and he refused to take a bottle at all.

We gave up on the idea of him ever taking a bottle. When he became old enough for baby foods, he sampled different tastes, but never at much volume or with any consistency. Spencer was already facially defensive because of his oxygen cannula, severe vomiting, and sensory integration disorder, so he was less than thrilled about eating in the first place. After a series of colds with ear infections, he completely stopped taking anything by mouth at around nine months old.

I never gave up trying to get him to eat something. Most of the time I would get turned down, but on a rare occasion Spencer would take a small sample of something. We would have a victory dance when he would eat half a yogurt melt. 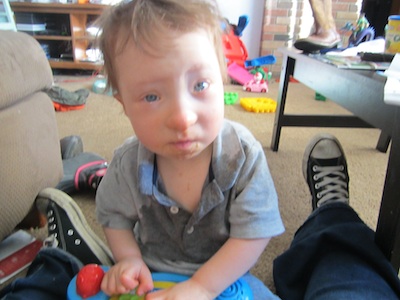 When he was around a year and a half old, I offered him a cereal puff and he ate it eagerly. And then another. Then twenty more. It’s like a light bulb went off in his head and he decided that eating was alright. However, Spencer had no idea how to eat and still had a lot of oral aversions. Until he was about two and a half, he would only do crunchy yet easily dissolved foods such as baby cheese puffs. We worked our way from crunchy and played around with different easy-to-eat textures, such as bread and pop tarts.

When he was turning three, I decided that every night we’d sit down together and eat dinner together. I never expected him to eat more than a few bites. That first night, I made him a very small plate of easy to eat food, and he ate everything. The next night, I made a bigger plate, and he ate all of that too. It kind of just started from there.

During this time we were doing a Blended Diet (BD), which I think was a huge reason that he started eating orally. As Spencer started eating more, we backed off tube feeds a bit, which was easy to do on BD. We kept a regular schedule and would feed Spencer every four hours. If he ate enough orally, we wouldn’t do a tube feed. If he didn’t eat so great, we’d do a small tube feed. That way, he still got his required calories but had a chance to feel hungry as well. We never starved him by completely skipping feeds. Eventually, he started eating enough to not have to worry about calories and we stopped making blends.

Where Spencer struggled the most was with drinking. For a while we had to do water boluses because we simply couldn’t get enough liquid in him. I’m sure we have owned every sippy cup ever made. I was shopping one day and saw the Playtex Baby First Lil Gripper Straw Trainer Cup. It’s the same concept as the Honey Bear Cup used by speech therapists. Basically you put the straw in the kid’s mouth and squeeze the cup and liquid comes out without the child having to suck. Spencer was hesitant at first, and I would have to squirt the liquid in his mouth. Then he eventually started putting his lips around the straw. After a while, he finally figured out how to suck something up out of it. He was soon able to transition to other straws.

We also discovered that he really likes Yoo-hoo. I let him try Yoo-hoo because he was eyeing his cousin’s box. We got him his own and he sucked down two boxes in one sitting. Yoo-hoo, out of all things, was what got him drinking enough to stop doing water boluses.

His eating skills get better and better every day. For a long time, he wouldn’t eat anything pureed. Now he is hooked on fruit pouches. While he still isn’t the greatest chewer, he’s getting better and better. Someday, this kid is going to be able to eat a steak. But for now, we just follow his lead.

Seeing Spencer’s feeding tube go will be bittersweet. It may sound strange, but his feeding tube has always felt like part of our family. However, Spencer’s decided he’s done being a “tubie,” and we are so excited for him.

Stay in therapy. I know it’s frustrating to keep going to feeding therapy without any results, but therapy is building a foundation for other skills. Spencer has been in physical, occupation, and speech/feeding therapy since he was two days old. While sometimes it seemed like he wasn’t learning anything, we’ve seen skills emerge when we least expected them.

Never give up because your child will surprise you. If you had asked me a year ago how long we expected Spencer to have his tube, I would have said years.

Try food every day. I made an effort to offer Spencer something orally just about every day. Most days, he’d refuse me. When he did eat something, it was cause for celebration!

Do whatever works! Spencer didn’t like the idea of a spoon or fork coming anywhere near his face, so I fed him with my fingers. It took a long time to get him to take a spoon (and he still won’t feed himself with one).

Make eating fun. I make stupid noises, and when Spencer is really struggling, I dance after every bite. For a long time he needed a toy to play with while eating to help keep him from getting upset.

Find something your child loves and go with it. Like I mentioned above, Spencer loves Yoo-hoo. Yeah, it isn’t the most nutritionally sound item for him to consume, but at least he’s drinking something. It also helped build his drinking skills, and he’s now drinking just about anything. Start with something and build on it.

And remember, there is no timeline. Don’t stress, and give your kid time. I know a lot of parents have felt stressed about their child having a tube. A feeding tube isn’t a horrible thing. Being a “tubie” is something to be proud of and is no reason to be ashamed. My son is alive because of that little piece of plastic, and we’re proud to be a “tubie” family.

Rachel and Spencer Nichols live in Ashland, Kentucky. You can follow their journey via their blog, Joining the Clubbed Foot Club.