I’ve always struggled with the concept of faith. It’s not from lack of religious education—I went to church every single Sunday until I was teenager and grew up studying the Bible. Even as a child, my relationship with God was always questionable. As a young adult, I dabbled in other religions and even took college classes on theology, but my concept of faith was a shaky one. For a long time, I declared myself an Agnostic and maintained a Pascal’s Wager perspective: “If we wager that God exists and we are right, we win everything. If we wager that God exists and we are wrong, we lose nothing.”

Then I had my son, Spencer. Spencer was born with Say Barber Biesecker Syndrome (also known as Ohdo Syndrome) and Pierre Robin Sequence. For Spencer, this means he will likely have a lifetime of medical issues and cognitive and physical delays. We didn’t know Spencer had any medical issues, aside from a clubbed foot, until he was a day old. Spencer was rushed to Cincinnati Children’s Hospital and our entire world turned upside down. I wanted him so badly, but I didn’t want him to have to face a life of hardship.

In my ignorance, I didn’t know why God would burden me with a child who had special needs. I was a good person and my son was supposed be my reward. I had a future planned out, and it didn’t include the NICU, doctors, and raising a baby with medical needs. I begged God to make him “normal.”

I lost what little belief I had left while Spencer was in the NICU. My soul was crushed. We didn’t know what genetic syndrome Spencer had, but we knew he had something. We didn’t know if he would get worse or get better, if he would grow up and be fine, or if he would grow up at all. This kept a constant stream of medical professionals by his bedside. Spencer, aside from his transfer from his birth hospital, had never been outside a hospital. He was my child, but yet he wasn’t. He belonged to the hospital and I was just there to watch. I couldn’t even hold him without tangling monitor wires or oxygen tubes.

We thought Spencer was going to get out the NICU when he was about two months old, and then he failed a sleep study. Why? Couldn’t God see that I was hurting? That I needed Spencer home and in his now empty crib? The God that I was taught about as a child was merciful and loving. Why didn’t he love me and why didn’t he love Spencer? Where was he when I needed him the most?

Then I realized he wasn’t there at all.

My primary justification that God doesn’t exist is the suffering of children. The most maddening part of Spencer’s medical journey is his pain and how I can see it has affected him. Spencer has had over two dozen surgical procedures and countless tests. If God is all loving and merciful, why does Spencer have to go through so much pain to live? 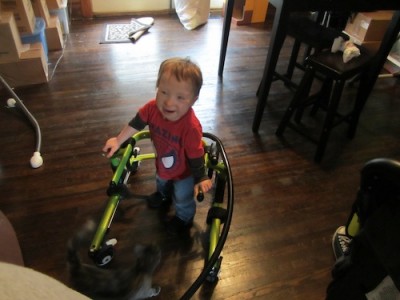 All of my years of Christian guilt made me question that maybe this is my punishment for not believing enough. But why would a merciful God punish my innocent child who has done no evil in the world? Why would he make any of our kids go through this? To make us stronger? I don’t need to be stronger, I’m as strong as it gets. No religious cliche could make it make any sense to me, and still doesn’t.

People tell me Spencer is a miracle from God. That God willed him to live. But one of my good friends, who has several children with medical needs, once told me something that really resonated. She said something along the lines of, “I tell people not to pray for God’s will. If God had it his way, my kids would be dead.”

Spencer is a miracle, but he is a miracle because of his own fight, determination, and pure stubbornness. He is the product of his own accord, my tireless efforts, and science. I put my faith in Spence, his medical team, his father, and myself. We are all reasons why he is alive, happy, and thriving—not God.

Rachel Nichols and her family live in Ashland, Kentucky. You can follow their journey via their blog, Joining the Club Foot Club.