Your School Experience CAN be Positive!

I was panic stricken when I thought about Spencer starting school. I have advocated for my child from the beginning to make sure that he not only survived, but also thrived. How could people who hadn’t known him his whole life, who hadn’t fought for him like I had, or watched him fight like I had, feel as passionately about him the way I did? Would he get picked on by the other kids for being in a wheelchair or because he was different? Would his education get pushed to the side because he has a genetic syndrome? Would he even like school? 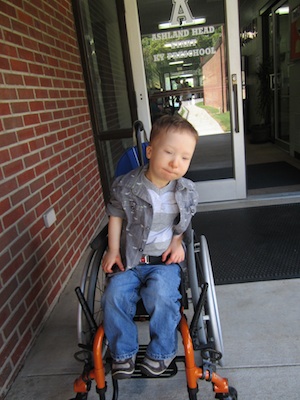 Spencer has Say Barber Biesecker Young-Simpson Syndrome, also referred to as Ohdo Syndrome. His syndrome is very rare and most doctors haven’t even heard of it, let alone educational professionals. Spencer’s type of Ohdo Syndrome includes physical and intellectual delays, feeding difficulties, congenital heart defects, airway abnormalities, hearing loss, hypotonia, hypothyroidism, and a giant list of other issues. In addition to these issues, he is non-verbal, doesn’t really walk, and has sensory processing disorder. We knew going in that Spencer’s education wasn’t going to be typical.

I went in to Spencer’s IEP meeting, guns blazing, ready for a fight. In my head, I had been planning and fretting over Spencer’s IEP since he was a newborn. I have a BA in education and I’ve seen kids who have been lost by a broken education system. I’ve also seen special education done right. Not only had I heard of all the horror stories revolving around IEPs from other parents of kids with special needs, but I’ve also personally seen evidence of them in the classroom.

The planner in me was prepared. I had given the school copies of Spencer’s most recent PT, OT, and Speech evaluations. I had letters from his genetics doctor and behavioral pediatrician, which included lengthy lists of recommendations. I had several conversations with the disabilities coordinator expressing my concerns, which ranged from the teachers being able to handle him down to his dietary needs. Every time I called or stopped in, she’d talk me down and assure me that everything would be fine.

I went in to his IEP meeting a bundle of nerves, but in “mother bear” mode. The meeting included the disabilities coordinator, the speech therapist, a couple of teachers, and me. We all sat in the office and just talked about Spencer. As a team, with me doing a lot of the talking, we changed the goals that he had achieved since the evaluations and we added things that I’d like to see him doing. The speech therapist and I discussed communication strategies since his private therapist worked primarily on feeding. I felt comfortable with the goals that we set in place for him, and knew we could change them, as needed, throughout the school year.

As part of his IEP, the school would provide PT, OT, and Speech, which would give us an extra session of all three a week. A big concern of mine would be that Medicaid wouldn’t pay for the school sessions and we would have to quit working with our beloved private therapists. The coordinator assured me that they want no child to miss out on private therapy, and Kentucky actually changed rules to accommodate both.

Once we worked out his goals, we then discussed his accommodations. The coordinator had already put in the recommendations from his doctors, such as Spencer requiring a personal aide and a care plan.

One of my biggest concerns was Spencer eating at school. Spencer was starting to end his journey with his feeding tube and was eating most of his meals orally, but still needed water boluses done twice while he was there. This was no problem since the school nurse was familiar with tube feeding. The same went for feeding tube pull-outs. They would attempt to replace his tube themselves (several people were shown how to do it) and if they couldn’t get the tube back in, they would call me. In addition to needing the water boluses, he also had a lengthy list of foods he can’t eat because of allergies or lack of skill, which was no issue. I just had to have his doctor write it all out and the cafeteria would prepare his meals according to those plans.

We also made sure that he wouldn’t be counted against for missing school because of illness or an appointment. This worked out well for us, because he missed a ton of school this year. Spencer missed nearly the entire month of March, due to a feeding tube removal complication, and the only question school had about all the missed days was, “How is he doing? We miss him!”

The only thing that was disappointing, as far as accommodations go, is that the Head Start busses are not handicapped accessible. The school offered to bring a handicapped bus to come get him every day, but he would be without his peers, which was a main reason we wanted him to take the bus. I opted to take him to and from school and I am paid mileage to do so.

I can’t say enough good things about Spencer’s school experience. He loves school. He gets so excited when we pull up in the parking lot. He is a completely different child than the one I sent to school last September. My biggest hopes were that he would love school and he would make some friends. Gone is the child that would cry when any stranger would come up to him. He is the most popular kid at school. 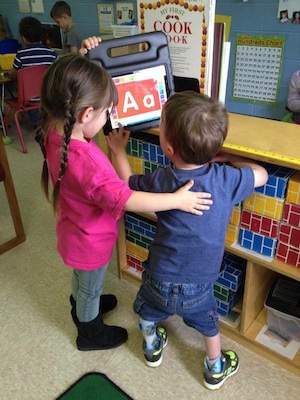 Seriously, the wheelchair has made him a celebrity. Instead of seeing his wheelchair or leg braces, his friends see him. I’m not even quite sure if they have realized he doesn’t talk. The kids also learn from Spencer and hopefully their interactions with him will teach them a lifetime of compassion.

While Spencer hasn’t exactly learned the same things his friends at school have, he has still learned. He is challenged by his teachers and is taken out of his comfort zone, even if it is just over finger painting. He’s become a dancing machine, has broadened his musical preferences, and has also finally learned to sit down and pay attention to a book, all from carpet time. He vocalizes more, has learned how to steer his wheelchair on his own, and is having less meltdowns. He is starting to become more sociable and enjoys being around other children now. Most importantly, he has a life outside of mine and the small protective bubble we had him stuck in.

I can’t say enough amazing things about Spencer’s teachers and the staff at his school. They see him the same way I do. They don’t see a kid with a wheelchair or a genetic syndrome; they see him. They are amused by his little quirks just as much as I am. They understand that even though he doesn’t talk, he can speak volumes. They see his potential, his genius, when not everyone else in the world does. They challenge him to try new things and are there to give him a hug when it doesn’t work out. They keep in mind that his learning experience is a little different from his typical peers, but make sure he isn’t excluded from any learning experience, unless he “tells” them he needs to be. They understand that the classroom can be overwhelming for him at times, so they’ll take him out in to the hall to go look at the fish tank or to go say hi to the school nurse.

He has become best friends with one of the co-op kids from the high school, and they will play hide and go seek together in the office. Every school day, I’ll have at least one school employee ask Spencer, instead of asking me, how he is today. It’s his interactions with the staff that helps him learn and grow.

Spencer has survived his first year old school. Not only did he survive, he’s thriving. Upon writing this, he has five days of school left before summer break. At the beginning of the year, I was worried having him outside the house without me. Now I’m concerned what on earth I’m going to do with him at home all summer.

Rachel and Spencer Nichols live in Ashland, KY. You can follow their journey on their blog, Joining the Clubbed Foot Club: And Other Spencer Related Adventures.