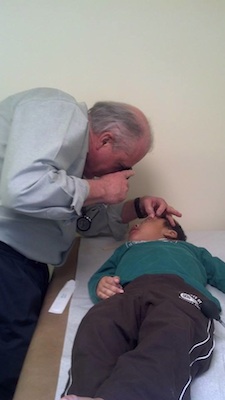 At one of my son’s recent sick child visits to his pediatrician, his doctor commented that he wished I would give a seminar to parents on how to avoid hospitalizations. Since I never seem to have time to give seminars, I thought writing an article was a great idea, and am thankful I get this chance!

When my first child with medical issues came along, I was sufficiently scared to death. We spent weeks of every month in the children’s hospital. It seemed like this little fellow would just suddenly get sick—seriously sick—and my only recourse was hospitalization. Even his doctors couldn’t seem to prevent the hospitalizations.

However, I began to notice that he had warning signs, days and sometimes up to a week before he actually became critically ill. I started to monitor him closely—O2 sats, respirations, blood pressure, behavior-—and writing a journal. Soon I formed a good picture of his warning signs. I also asked his pediatrician to teach me how listen to his lungs with a stethoscope. A nurse friend of mine also helped me, and I found out that there are even YouTube videos of respiration sounds to help guide me.

Once armed with the knowledge of my child’s “normal,” I was able to go to his doctors and ask for an Emergency Plan. I learned to recognize the beginning signs of illness and what critical means for him. Now I have plans for each of my children who are medically fragile. The plans change as their needs change.

I keep a notebook of each of my children’s vital information, medical diagnoses, doctors, surgeries, and serious illnesses, as well as current medication concentrations, dosages, reasons for the medication and how the child takes each medication (orally, in apple sauce, via G or J tube). I also keep an Emergency Plan attached. Here, for example, are plans for seizures and illness:

Some things to keep in mind:

Lisa Blackstone is an adoptive mom of three children (two of whom are medically fragile), biological mom of two children and a contributor to Complex Child and Upstate Parents. She lives with her husband and five children in Upstate South Carolina.